Could be sustainable "green" replacement for petrochemical-based production

UPTON, NY — In theory, plants could be the ultimate “green” factories, engineered to pump out the kinds of raw materials we now obtain from petroleum-based chemicals. But in reality, getting plants to accumulate high levels of desired products has been an elusive goal. Now, in a first step toward achieving industrial-scale green production, scientists from the U.S. Department of Energy’s (DOE) Brookhaven National Laboratory and collaborators at Dow AgroSciences report engineering a plant that produces industrially relevant levels of compounds that could potentially be used to make plastics. The research is reported online in Plant Physiology, and will appear in print in the December issue.

“We’ve engineered a new metabolic pathway in plants for producing a kind of fatty acid that could be used as a source of precursors to chemical building blocks for making plastics such as polyethylene,” said Brookhaven biochemist John Shanklin, who led the research. “The raw materials for most precursors currently come from petroleum or coal-derived synthetic gas. Our new way of providing a feedstock sourced from fatty acids in plant seeds would be renewable and sustainable indefinitely. Additional technology to efficiently convert the plant fatty acids into chemical building blocks is needed, but our research shows that high levels of the appropriate feedstock can be made in plants.”

The method builds on Shanklin’s longstanding interest in fatty acids — the building blocks for plant oils — and the enzymes that control their production (see related links below). Discovery of the genes that code for the enzymes responsible for so called “unusual” plant oil production encouraged many researchers to explore ways of expressing these genes and producing certain desired oils in various plants. 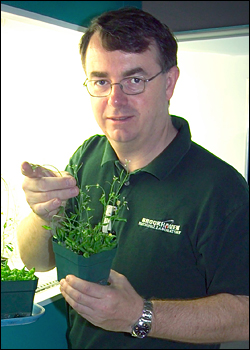 “There are plants that naturally produce the desired fatty acids, called ‘omega-7 fatty acids,’ in their seeds — for example, cat’s claw vine and milkweed — but their yields and growth characteristics are not suitable for commercial production,” Shanklin said. Initial attempts to express the relevant genes in more suitable plant species resulted in much lower levels of the desired oils than are produced in plants from which the genes were isolated. “This suggests that other metabolic modifications might be necessary to increase the accumulation of the desired plant seed oils,” Shanklin said.

“To overcome the problem of poor accumulation, we performed a series of systematic metabolic engineering experiments to optimize the accumulation of omega-7 fatty acids in transgenic plants,” Shanklin said. For these proof-of-principle experiments, the scientists worked with Arabidopsis, a common laboratory plant.

Enzymes that make the unusual fatty acids are variants of enzymes called “desaturases,” which remove specific hydrogen atoms from fatty acid chains to form carbon-carbon double bonds, thus desaturating the fatty acid. First the researchers identified naturally occurring variant desaturases with desired specificities, but they worked poorly when introduced into Arabidopsis. They next engineered a laboratory-derived variant of a natural plant enzyme that worked faster and with greater specificity than the natural enzymes, which increased the accumulation of the desired fatty acid from less than 2 percent to around 14 percent.

Though an improvement, that level was still insufficient for industrial-scale production. The scientists then assessed a number of additional modifications to the plant’s metabolic pathways. For example, they “down-regulated” genes that compete for the introduced enzyme’s fatty acid substrate. They also introduced desaturases capable of intercepting substrate that had escaped the first desaturase enzyme as it progressed through the oil-accumulation pathway. In many of these experiments they observed more of the desired product accumulating. Having tested various traits individually, the scientists then combined the most promising traits into a single new plant.

“This proof-of-principle experiment is a successful demonstration of a general strategy for metabolically engineering the sustainable production of omega-7 fatty acids as an industrial feedstock source from plants,” Shanklin said.

This general approach — identifying and expressing natural or synthetic enzymes, quantifying incremental improvements resulting from additional genetic/metabolic modifications, and “stacking” of traits — may also be fruitful for improving production of a wide range of other unusual fatty acids in plant seeds.

This research was funded by the DOE Office Science, and by The Dow Chemical Company and Dow AgroSciences.