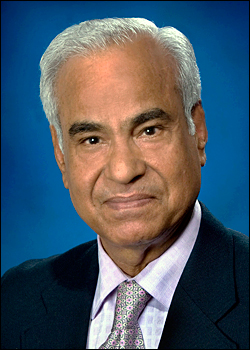 Upton, NY — Suresh Srivastava, a senior medical scientist at the U.S. Department of Energy’s Brookhaven National Laboratory, has won a Society of Radiopharmaceutical Sciences Lifetime Achievement Award. Srivastava received the award at the International Symposium on Technetium and Other Radiometals in Chemistry and Medicine, held September 8-11, 2010, in Bressanone, Italy. At the same time, Srivastava was also honored with the University of Padova’s Gold Medal in recognition of his continued role in the advancement of basic sciences in nuclear medicine.

The Society of Radiopharmaceutical Sciences holds this international symposium every four years to gather scientists from around the world who study the application of radioactive metals in medical imaging and in the therapy of cancer and other diseases.

“I feel very humbled and greatly honored to receive these awards. I consider myself very fortunate to have had the opportunity to work at Brookhaven National Laboratory,” said Srivastava, who is head of the Radionuclide and Radiopharmaceutical Research Division in Brookhaven’s Medical Department. “The fact that my research has benefited patients is reward enough.”

Srivastava has devoted his work to the development of radioactive metals that can improve the diagnosis and treatment of disease. He came to Brookhaven in 1975, when he joined a chemistry group led by Powell “Jim” Richards, the pioneer of the medical imaging tracer technetium-99m. Srivastava was among the scientists who further refined and promoted the use of Brookhaven’s technetium-99m generator, a system that continues to enable medical professionals to image most human organs. Today, technetium-99m is the most used radiotracer in medical imaging, benefiting more than 15 million patients annually in the U.S. alone.

In 1983, Srivastava was promoted to lead the Radionuclide and Radiopharmaceutical Research Division as well as the technetium chemistry group in Brookhaven’s Medical Department. During the 1980s, Srivastava was involved in the development of the instant technetium-99m red-blood-cell labeling kit, commercially available as UltraTag RBC. The kit rapidly became an invaluable tool for cardiovascular imaging procedures, such as determining the efficiency of the heart’s pumping, and detecting life-threatening conditions such as gastrointestinal bleeding.

Srivastava’s current research includes the development and pre-clinical and clinical testing of the radioactive metal tin-117m as a pharmaceutical that can provide pain relief and treatment for cancer patients with bone metastases. This metal also serves as an agent for the imaging and treatment of coronary artery disease. Srivastava also is involved in developing radiolabeled monoclonal antibodies and viral vector systems for the imaging and therapy of cancer. In addition, he is investigating the use of positron-labeled stem cells for the imaging of their trafficking and biodistribution.

“I am very grateful to BNL, and the Medical Department in particular, for providing continuous support and a uniquely fertile environment to conduct and successfully accomplish a number of important research projects that have led to these recognitions,” said Srivastava.

Srivastava’s honors include many awards. These include the 1986 Industrial Research-100 (now R&D) magazine award; the Federal Laboratory Consortium Award in 1988; the Special Recognition Award of the Chilean Society of Biology and Nuclear Medicine in 1989; the BNL Distinguished Research and Development Award in 1995; the RPSC Distinguished Service Award in 1999; the Indo-American Society of Nuclear Medicine Lifetime Achievement Award in 1999; and the 2003 Battelle Distinguished Inventor Award. He has published more than 220 refereed journal articles, 360 abstracts, 26 book chapters, and many seminal review articles. He is the inventor or co-inventor of 29 patented and three statutory inventions. Srivastava is an active member of more than a dozen national and international associations, including the U.S. Society of Nuclear Medicine and the American Chemical Society, in both of which he has held several offices.