This press release, issued on November 16, 2010 by the American Physical Society (APS), announces the release of a new report, “Integrating Renewable Electricity on the Grid,” by the APS’s Panel on Public Affairs. The panel that authored the report was co-chaired by Jim Misewich, Brookhaven National Laboratory’s Associate Director for Basic Energy Sciences, and George Crabtree, Argonne National Laboratory’s Associate Director in the Materials Science Division. 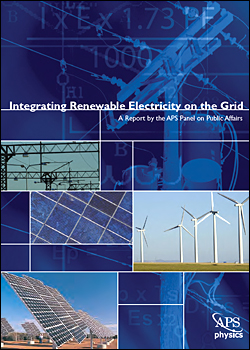 WASHINGTON, D.C. — U.S. policymakers must focus more closely on developing new energy storage technologies as they consider a national renewable electricity standard, according to one of the principal recommendations in a newly released report, Integrating Renewable Electricity on the Grid, by the American Physical Society’s Panel on Public Affairs (POPA). Establishing a national renewable electricity standard will help to unify the fragmented U.S. grid system—an important step in the wider adoption of using more wind and solar for energy generation.

But, without the focus on storage devices, it will be difficult to meet proposed renewable electricity standards, the report asserts. Wind and solar energy are variable by nature: The sun doesn’t always shine, and the wind doesn’t always blow. The amount of electricity a consumer has available to complete household chores could change in a matter of seconds, hours or days—placing great importance on the need for robust storage methods.

Another challenge facing the grid involves the long-distance transmission of renewable electricity from places that receive a lot of wind and sun to those that do not.

“We need to move faster to have storage ready to accommodate, for example, 20 percent of renewable electricity on the grid by 2020,” said George Crabtree, co-chairman of the POPA study panel and a senior scientist at Argonne National Laboratory. “And, by devoting the necessary resources to the problem, I am confident that we can solve it.”

Comments on the APS report

"The APS Report effectively highlights many of the challenges associated with integrating renewables on the electric grid,” said Frank Murray, president and CEO of the New York State Energy Research and Development Authority (NYSERDA). “New York has established an aggressive statewide renewable energy target to meet 30% of its electric consumption with renewable resources by 2015. Energy storage and smart grid technologies will play a key role as higher levels of intermittent resources are interconnected at both the transmission and distribution level. NYSERDA will continue to work closely with the New York State Smart Grid Consortium and the New York Battery and Energy Storage Consortium to develop new technologies, policies, and business models that allow us to meet our renewable energy goals and promote economic development."

“This APS report points out the key challenges we face if we intend, as a nation, to take advantage of the vast renewable energy resources available to us,” said Robert Catell, chairman of the Advanced Energy Center at Stony Brook University and head of the New York State Smart Grid Consortium. “The report’s recommendations provide us crucial guidance to help meet these challenges by focusing our ongoing research investments on key Smart Grid issues including advanced energy storage and electricity transmission."

The report addresses variability and transmission issues by urging the U.S. Department of Energy (DOE) to increase research on materials to develop energy storage devices and by encouraging the DOE to focus on long-distance superconducting direct current cables to bring renewable electricity to load centers, lessening the chance that power will be disrupted. The report also calls for examining renewable electricity in light of a unified grid instead of one that is fragmented and improving the accuracy of weather forecasts to allow for better integration of renewable electricity on the grid.

The APS report is unique among grid studies: Its recommendations cover both scientific and business perspectives.

The U.S. Department of Energy (DOE) should:

The Federal Energy Regulatory Commission and the North American Electric Reliability Corporation should:

About APS: The American Physical Society is the leading physics organization, representing 48,000 members, including physicists in academia, national laboratories, and industry in the United States and internationally. APS has offices in College Park, MD (Headquarters), Ridge, NY, and Washington, DC.