The following news release was issued by the University of Leeds, UK. For more information about Brookhaven’s role in this research, contact Karen McNulty Walsh, 631 344-8350, kmcnulty@bnl.gov.

An international team of researchers has succeeded in creating artificial spin ice in a state of thermal equilibrium for the first time, allowing them to examine the precise configuration of this important nanomaterial. 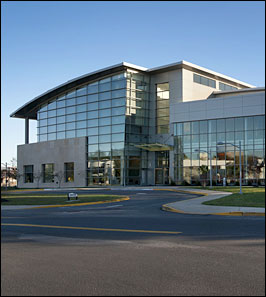 Scientists from the University of Leeds, the US Department of Energy's Brookhaven National Laboratory and the UK Science and Technology Facilities Council's Rutherford Appleton Laboratory say the breakthrough will allow them to study in much greater detail a scientific phenomenon known as 'magnetic monopoles', which are thought to exist in such structures. Their findings are published today in the journal Nature Physics.

Artificial spin ice is built using nanotechnology and is made up of millions of tiny magnets, each thousands of times smaller than a grain of sand. The magnets exist in a lattice in what is known as a 'frustrated' structure. Like water ice, the geometry of the structure means that all of the interactions between the atoms cannot be satisfied at the same time.

"It's like trying to seat alternating male and female diners around a table with an odd number of seats - however much you re-arrange them you will never succeed," said Dr Christopher Marrows from the University of Leeds, co-author of the paper.

In spin ice, magnetic dipoles with a north and south pole are arranged in tetrahedron structures. Each dipole has magnetic moments, similar to the protons on H2O molecules in water ice, which attract and repel each other. Consequently, the dipoles arrange themselves into the lowest possible energy state, which is two poles pointing in and two pointing out.

Dr Marrows said: "Spin ices have created a lot of excitement in recent years as it has been realised that they are a playground for physicists studying magnetic monopole excitations and Dirac string physics in the solid state. However, until now all of the samples of these artificial structures created in the lab have been what we call 'jammed'.

"What we have done is find a way to un-jam spin ice and get it into a well-ordered ground state known as thermal equilibrium. We can then freeze a sample into this state, and use a microscope to see which way all the little magnets are pointing. It's the equivalent of being able take a picture of every atom in a room as it allows us to inspect exactly how the structure is configured."

Jason Morgan, PhD student at the University of Leeds and lead author of the paper, was the first member of the team to observe the sample in equilibrium. He said: "Getting the sample to self-order in such a way has never been achieved experimentally before and for a while had been considered impossible. But when we looked at the sample using magnetic force microscopy and saw this beautiful periodic structure we knew instantly that we had achieved an ordered ground state."

The researchers have also been able to observe individual excitations out of this ground state within their sample, which they say is evidence for monopole dynamics within the lattice.

Magnetic monopoles - magnets with only a single north or south pole ¬¬- are former hypothetical particles that are now thought to exist in spin ice. There is hope among scientists that understanding these monopoles in more detail could lead to advances in a novel technology field known as 'magnetricity' - a magnetic equivalent to electricity.

Co-author Sean Langridge, a Science and Technology Facilities Council (STFC) Fellow and visiting Professor at the University of Leeds, added: "In the naturally occurring spin-ice systems this ground state is predicted but has not been experimentally observed.

"Now that is has been observed in an artificial system the next step is to observe dynamically the excitations from this ground state. We can only do this by controlling the interactions with state of the art lithographic techniques. This level of control will provide an even greater level of understanding in this fascinating system."

The team created "artificial" spin ice samples at Brookhaven using a state-of-the-art nanotechnology tool called an electron beam writer. A similar £4 million facility is shortly to be opened at the University of Leeds which will be unique to the UK and will allow continued collaboration with the researchers at Brookhaven.

The research was funded by the Engineering and Physical Sciences Research Council, the Science and Technology Facilities Council, and the US Department of Energy's Office of Science.

To request an interview with Dr Chris Marrows, or to request photographs of the spin ice sample, please contact Hannah Isom in the University of Leeds press office on 0113 343 4031 or email h.isom@leeds.ac.uk

The 2008 Research Assessment Exercise showed the University of Leeds to be the UK's eighth biggest research powerhouse. The University is one of the largest higher education institutions in the UK and a member of the Russell Group of research-intensive universities. The University's vision is to secure a place among the world's top 50 by 2015. www.leeds.ac.uk

The Science and Technology Facilities Council ensures the UK retains its leading place on the world stage by delivering world-class science; accessing and hosting international facilities; developing innovative technologies; and increasing the socio-economic impact of its research through effective knowledge exchange partnerships.