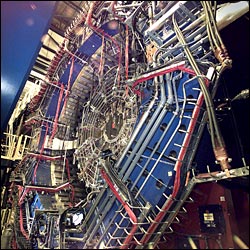 The STAR detector at the Relativistic Heavy Ion Collider at Brookhaven National Laboratory.

UPTON, NY — Members of the international STAR collaboration at the Relativistic Heavy Ion Collider — a particle accelerator used to recreate and study conditions of the early universe at the U.S. Department of Energy's Brookhaven National Laboratory — have detected the antimatter partner of the helium nucleus: antihelium-4. This new particle, also known as the anti-alpha, is the heaviest antinucleus ever detected, topping a discovery announced by the same collaboration just last year.

The new record will likely stand far longer, the scientists say, because the next weightier antimatter nucleus that does not undergo radioactive decay is predicted to be a million times more rare — and out of reach of today's technology.

"This discovery highlights the extraordinary capabilities of RHIC to investigate fundamental questions about the nature of matter, antimatter, and the early universe," said William F. Brinkman, Director of the DOE Office of Science.

Steven Vigdor, Brookhaven's Associate Lab Director for Nuclear and Particle Physics, who leads the RHIC program, said, "Barring a new breakthrough in accelerator technology, or the discovery of a completely new production mechanism, it is likely that antihelium-4 will remain the heaviest stable antimatter nucleus observed for the foreseeable future." 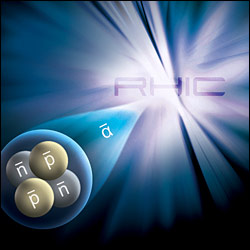 A rendering of antihelium-4 (anti-alpha) emerging from a collision in the Relativistic Heavy Ion Collider.

The STAR physicists describe the discovery in a paper in Nature, published online April 24, 2011.

The ability to create and study antimatter in conditions similar to those of the early universe is no small matter: One of the great mysteries of physics is why our universe appears to be made entirely of ordinary matter when matter and antimatter are understood to have been created in equal amounts at the time of the Big Bang.

At RHIC, head-on collisions of gold ions moving at nearly the speed of light simulate conditions just after the Big Bang. In these atomic smashups, quarks and antiquarks likewise emerge with approximately equal abundance. A major fraction of the stable antimatter produced in RHIC collisions leaves a clear signal in the STAR detector before annihilating with ordinary matter in the outer part of the experimental apparatus.

By sifting through data for half a trillion charged particles emitted from almost one billion collisions, the STAR collaboration has detected 18 examples of the unique "signature" of the antihelium-4 nucleus. Consisting of two antiprotons and two antineutrons in a stable bound state that does not undergo radioactive decay, the antihelium-4 nucleus has a negative electric charge that is twice that of an electron, while its mass is very close to four times that of a proton. Data plots show that the newly discovered anti-alphas are very cleanly separated from the lighter isotopes, and are at the expected mass. 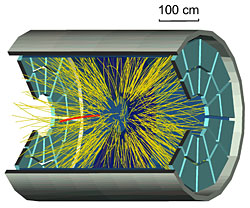 A three-dimensional rendering of the STAR time projection chamber surrounded by the time-of-flight barrel (the outermost cylinder). The image shows tracks from an event that contains an antihelium-4 (track highlighted in bold red).

The scientists also measured the antihelium-4 production rate in nuclear interactions, and found that it is consistent with expectations based on a statistical coalescence of antiquarks from the soup of quarks and antiquarks generated in RHIC collisions. But the fact that 12 antiquarks combine to build such a complex antinucleus in a way that bears out these predictions is really quite remarkable considering it all takes place in the midst of rapidly expanding matter created at trillions of degrees and surviving for only ten trillionths of a trillionth of a second.

Knowing the production rate of these antinuclei is important to a wide range of scientific disciplines, including searches for new phenomena in the cosmos. For example, it ties in with the scientific goals of an experiment known as the Alpha Magnetic Spectrometer (AMS), which will be delivered to the International Space Station via one of the last space shuttle missions, currently scheduled for launch in late April 2011. This experiment will search for antimatter in space.

"If AMS were to find evidence for the existence of bulk antimatter elsewhere in the cosmos, the new measurement from the STAR experiment would provide the quantitative background rate for comparison," said Hank Crawford, a STAR collaborator from the University of California, Berkeley, Space Sciences Laboratory. "An observation of antihelium-4 by the AMS experiment could indicate the existence of large quantities of antimatter somehow segregated from the matter in our universe," he said.

In 2010, the Large Hadron Collider at CERN, the European laboratory for nuclear and particle physics research, began its own collisions of heavy nuclei at energies more than an order of magnitude higher than at RHIC. Experiments there also have the capability to study production of antinuclei, and it will be interesting to see what those experiments find at higher energies. 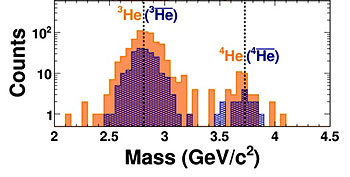 This graph plots particle counts by mass, showing ordinary helium nuclei (He-3 and He-4) in orange, and their antimatter counterparts (antihelium-3 and antihelium-4) in blue. The plot illustrates that the newly discovered antimatter nuclei, antihelium-4, are very cleanly separated from the lighter isotopes, and are at the correct mass.

"The discovery of the antihelium-4 nucleus also has special synergy with a major scientific anniversary: the 100th anniversary of Ernest Rutherford's seminal gold foil experiments, in which he used ordinary-matter helium-4 (alpha) particles to probe the structure of matter," said Brookhaven physicist Aihong Tang, a member of the STAR collaboration and a lead author on the Nature paper. "These experiments, conducted in 1911, established the very existence of atomic nuclei for the first time, and marked the dawn of our modern understanding of atoms."

The STAR collaboration is composed of 54 institutions from 12 countries. Research at RHIC is funded primarily by the U.S. Department of Energy's Office of Science and by various national and international collaborating institutions, with support from many funding agencies. Measurement capabilities vital to antihelium-4 identification were added to the STAR experiment in 2009 with the installation of a large time-of-flight detector. This device was constructed jointly by U.S. and Chinese institutions and was funded jointly by DOE's Office of Science and the National Natural Science Foundation of China, China's Ministry of Science and Technology, and the Chinese Academy of Sciences. The antihelium-4 discovery is being announced simultaneously in the U.S. and in China.