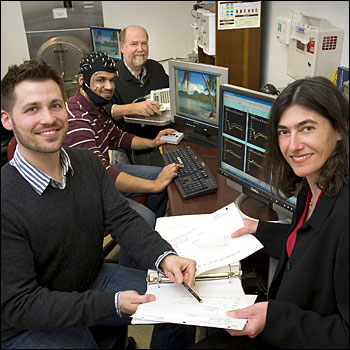 UPTON, NY — Scientists at the U.S. Department of Energy’s Brookhaven National Laboratory and Stony Brook University (SBU) have conducted the most comprehensive study to date of how cocaine users respond to drug-related and other emotional stimuli, making use of comparisons with a matched control group and exploring the effects of recent cocaine use and abstinence. The findings appear in a paper published online in the European Journal of Neuroscience.

Using measures of brain activity over time, the scientists found that images depicting cocaine use immediately captured motivated attention among both active and abstinent cocaine users — similar to the way other pleasant and unpleasant emotional images captured their attention compared with less evocative neutral scenes. But while abstinent cocaine users generally retained this heightened attentive engagement, those who had used cocaine within the past three days quickly lost their sensitivity, first to pleasant and then to drug-related and unpleasant evocative images — all within a mere 2000 milliseconds.

“Though a dampened response to drug images might appear helpful in those struggling with addiction, the impaired response to other emotional stimuli among recent cocaine users could indicate a general difficulty in sustaining motivated attention,” said Rita Goldstein, director of Brookhaven’s Neuropsychoimaging Group. “Impairments in sustaining non-drug-related, goal-oriented motivation could predispose addicted individuals to drug use as a way to compensate for their reduced response to other reinforcement — including the rewards that would come from not taking drugs,” she said.

The scientists studied 28 people addicted to cocaine who had used the drug within the past three days, 27 addicted individuals who had not used in that time, and 29 matched healthy control subjects. Using a “cap” of electrodes placed externally on the scalp, the scientists took measures of brain activity while the subjects viewed selected pleasant, unpleasant, neutral, and drug-related images, capturing data at three time intervals — within 300 milliseconds, 400-1000 milliseconds, and 1000-2000 milliseconds after each image was shown.

“These event-related potentials (ERPs) are a direct measure of neural activity and are ideally suited to study the time-course of attentive engagement with emotional and drug-related stimuli in addiction,” said SBU graduate student Jonathan Dunning, first author on the paper, who worked on this project in collaboration with Rita Goldstein and Greg Hajcak, his advisor at SBU.

The earliest measure showed that all subjects paid heighted attention to drug-related, pleasant, and unpleasant images compared to neutral ones. But in the next time interval, only the cocaine-addicted individuals (both those who were abstinent and recent users) showed a heightened response to drug-related images, continuing to respond as they did to other pleasant and unpleasant evocative images, while healthy control subjects maintained elevated responses only to the pleasant and unpleasant images.

“This increased neural response to cocaine-associated images among cocaine users is what we expected,” Dunning said. “It suggests that cocaine stimuli are similar to other emotional stimuli in increasing motivated attention among cocaine users.”

In the final time interval, 1000-2000 milliseconds, the scientists found that healthy controls remained responsive to pleasant and unpleasant images, while abstinent cocaine users continued to respond to pleasant and drug-related images at a heightened level. Interestingly, however, neural activity among subjects who had recently used cocaine was no longer heightened by the cocaine-related images — or by the other emotionally evocative images — compared with the neutral ones.

This difficulty in sustaining motivated attention to emotional stimuli could potentially predispose cocaine users to compulsive drug use as a compensatory mechanism for their blunted response, she said.

Given these findings, Goldstein and her SBU colleagues are interested in conducting further research to investigate whether similar event-related brain potentials can be useful in predicting behavior (e.g., drug-related choice) or even longer-term abstinence and treatment outcomes among individuals addicted to cocaine.

This research was funded by the National Institute on Drug Abuse and the General Clinical Research Center of SBU.