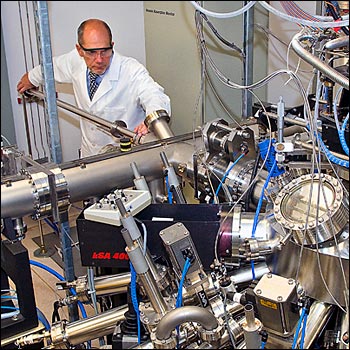 UPTON, NY — Scientists at the U.S. Department of Energy’s Brookhaven National Laboratory (BNL), collaborating with scientists from the Paul Scherrer Institute (PSI) and the University of Zürich in Switzerland, have found that sandwiching a barrier layer between two superconductors can make it superconducting at significantly higher temperatures. The results will be published online in Nature Communications on April 12, 2011.

Conventional superconducting materials allow electricity to flow without any resistance or energy loss when cooled below a transition temperature (Tc) near absolute zero. High-temperature varieties discovered more recently can operate at warmer temperatures, but still require significant cooling, which hampers their use in many large-scale practical applications. Finding ways to raise the temperature further, such as the layering approach described in this paper, could lead to the realization of such applications as low-power consumption, ultra-fast superconducting electronic devices.

Because thicker layers are easier to fabricate and work with, taking advantage of the Giant Proximity Effect could make it much easier to achieve on-chip device uniformity — the requirement that all devices on an electronic chip have similar parameters. “This has been a major technical hurdle for large-scale-integrated superconducting electronics,” Bozovic said.

By mapping the magnetic fields for each structure, the scientists observed the Giant Proximity Effect and found that a thick barrier of superconductor with a Tc of 5 Kelvin could transmit supercurrent at a temperature four times higher, if it is sandwiched between two superconductors with a Tc of 40 Kelvin. Their results also proved that the entire barrier layer is affected by the Giant Proximity Effect.

“In addition to its potential importance for superconducting electronics, the Giant Proximity Effect could be an important hint of what is going on in cuprates — what drives the high-temperature superconductivity,” Bozovic added. Discovering that mechanism could open up a whole new field for engineering superconductors with desired properties.

This research was supported by DOE’s Office of Science.