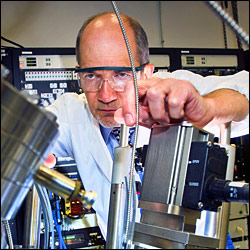 UPTON, NY — Like atomic-level bricklayers, researchers from the U.S. Department of Energy’s (DOE) Brookhaven National Laboratory are using a precise atom-by-atom layering technique to fabricate an ultrathin transistor-like field effect device to study the conditions that turn insulating materials into high-temperature superconductors. The technical break-through, which is described in the April 28, 2011, issue of Nature, is already leading to advances in understanding high-temperature superconductivity, and could also accelerate the development of resistance-free electronic devices.

“Understanding exactly what happens when a normally insulating copper-oxide material transitions from the insulating to the superconducting state is one of the great mysteries of modern physics,” said Brookhaven physicist Ivan Bozovic, lead author on the study.

One way to explore the transition is to apply an external electric field to increase or decrease the level of “doping” — that is, the concentration of mobile electrons in the material — and see how this affects the ability of the material to carry current. But to do this in copper-oxide (cuprate) superconductors, one needs extremely thin films of perfectly uniform composition — and electric fields measuring more than 10 billion volts per meter. (For comparison, the electric field directly under a power transmission line is 10 thousand volts per meter.)

Bozovic’s group has employed a technique called molecular beam epitaxy (MBE) to uniquely create such perfect superconducting thin films one atomic layer at a time, with precise control of each layer’s thickness. Recently, they’ve shown that in such MBE-created films even a single cuprate layer can exhibit undiminished high-temperature superconductivity.*

Now, they’ve applied the same technique to build ultrathin superconducting field effect devices that allow them to achieve the charge separation, and thus electric field strength, for these critical studies.

These devices are similar to the field-effect transistors (FETs) that are the basis of all modern electronics, in which a semiconducting material transports electrical current from the “source” electrode on one end of the device to a “drain” electrode on the other end. FETs are controlled by a third electrode, called a “gate,” positioned above the source-drain channel — separated by a thin insulator — which switches the device on or off when a particular gate voltage is applied to it.

But because no known insulator could withstand the high fields required to induce superconductivity in the cuprates, the standard FET scheme doesn’t work for high-temperature superconductor FETs. Instead, the scientists used electrolytes, liquids that conduct electricity, to separate the charges.

The result is a field effect device in which the critical temperature of a prototype high-temperature superconductor compound (lanthanum-strontium-copper-oxide) can be tuned by as much as 30 degrees Kelvin, which is about 80 percent of its maximal value — almost ten times more than the previous record.

The scientists have now used this enhanced device to study some of the basic physics of high-temperature superconductivity.

One key finding: As the density of mobile charge carriers is increased, their cuprate film transitions from insulating to superconducting behavior when the film sheet resistance reaches 6.45 kilo-ohm. This is exactly equal to the Planck quantum constant divided by twice the electron charge squared — h/(2e)2. Both the Planck constant and electron charge are “atomic” units — the minimum possible quantum of action and of electric charge, respectively, established after the advent of quantum mechanics early in the last century.

“It is striking to see a signature of such clearly quantum-mechanical behavior in a macroscopic sample (up to millimeter scale) and at a relatively high temperature,” Bozovic said. Most people associate quantum mechanics with characteristic behavior of atoms and molecules.

This result also carries another surprising message. While it has been known for many years that electrons are paired in the superconducting state, the findings imply that they also form pairs (although localized and immobile) in the insulating state, unlike in any other known material. That sets the scientists on a more focused search for what gets these immobilized pairs moving when the transition to superconductivity occurs.

Superconducting FETs might also have direct practical applications. Semiconductor-based FETs are power-hungry, particularly when packed very densely to increase their speed. In contrast, superconductors operate with no resistance or energy loss. Here, the atomically thin layer construction is in fact advantageous — it enhances the ability to control superconductivity using an external electric field.

“This is just the beginning,” Bozovic said. “We still have so much to learn about high-temperature superconductors. But as we continue to explore these mysteries, we are also striving to make ultrafast and power-saving superconducting electronics a reality.”

Coauthors on the paper include: I. Bozovic, A. Bollinger, J. Yoon, and J. Misewich from Brookhaven Lab and G. Dubuis and D. Pavuna from Ecole Polytechnique Federale de Lausanne (Switzerland).

This research was funded by the DOE Office of Science and the Swiss National Science Foundation.