Bacterial Protein Caught in the Act of Secreting Sticky Appendages 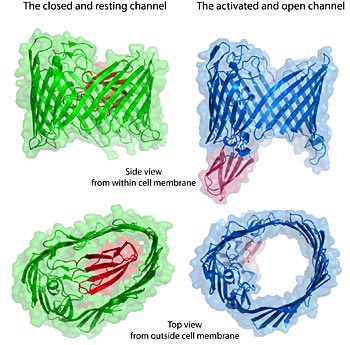 The bacterial protein transport channel in its resting closed state (green) and the activated open state (blue). The channel is sealed by a plug structure that is shown in red. Note the change of the channel shape from oval to near circular and displacement of the plug when open. Some parts of the protein molecule are omitted for simplicity.

UPTON, NY — New atomic-level “snapshots” published in the June 2, 2011, issue of Nature reveal details of how bacteria such as E. coli produce and secrete sticky appendages called pili, which help the microbes attach to and infect human cells. “These crystal structures unravel a complex choreography of protein-protein interactions that will aid in the design of new antibacterial drugs,” said Huilin Li, a biophysicist at the U.S. Department of Energy’s (DOE) Brookhaven National Laboratory and a professor at Stony Brook University, who participated in the research with a number of collaborators in the U.S. and in Europe*.

Many E. coli strains live harmlessly in our guts, but when they find their way into the urinary tract, they produce pili with sticky ends that allow them to attach to bladder cells and cause infection. Finding ways to interfere with pili formation could help thwart urinary tract infections, which affect millions of women around the world each year.

Previously, Li’s group at Brookhaven/Stony Brook and colleagues at Washington University School of Medicine and University College London solved individual pieces of the puzzle. In 2008, they combined their efforts to publish the first complete structure of the pore-like protein complex that traverses the bacterial membrane and transports pili components from the microbe cell’s interior to its outer surface**.

But the scientists were still not sure how the transporter protein’s various parts worked to “recruit” and bring together the many subunits that make up the pili — or how it assembled and moved these structures through the membrane to the bacterial cell’s surface. The new work, again combining efforts from the two teams, uses a range of imaging techniques and computer modeling to arrive at a more complete picture of the assembly process and transport mechanism. 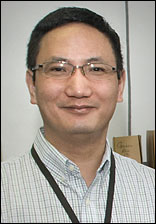 “This is the first view of a protein transporter in the act of secreting its substrate,” said Li.

At the European Synchrotron Radiation Facility in Grenoble, France, the Washington University/UK group determined the atomic-level crystal structure of the entire transporter protein, known as an “usher,” bound to the sticky adhesin subunit that forms the end of a pilus and another helper protein, called a chaperone, that shuttles the pilus subunits to the usher one at a time. Meanwhile, Li’s group worked at the National Synchrotron Light Source at Brookhaven to produce new images of the unbound usher protein in its closed, inactive state.

“Each group’s work tells only part of the story, but when combined, the results provide unique insights into how the transporter works,” said Li. “By comparing the same transporter in the closed and open state, we’ve determined how the gate should open, and exactly how the structure of the channel changes in response to the gate opening so the growing pilus can reach the exterior of the membrane,” Li said.

When no subunits are bound to the usher, the barrel like pore remains plugged, completely sealed off. But when the first chaperoned subunit, the adhesin, arrives, it causes a dramatic conformational change that unplugs the pore and changes its shape from an oval to nearly circular.

“This large conformational rearrangement in the translocation channel upon activation by adhesin-chaperone is unprecedented for these barrel proteins, which until now were considered rigid structures,” Li said.

Blocking or removing either of the two binding sites may therefore be a way to inhibit pilus formation, and this idea is already being explored in new drug-development investigations. The other details of pilus assembly revealed by this study may suggest additional targets for new drugs.