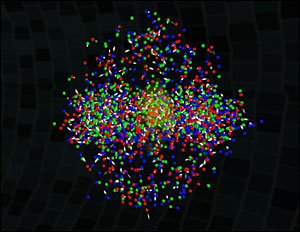 Simulation of a collision between two gold ions

UPTON, NY — The U.S. Department of Energy’s (DOE) Brookhaven National Laboratory has won two Bulldog Awards for Excellence in Media and Public Relations for a publicity initiative that brought worldwide media attention to 2010 research results from the Lab’s Relativistic Heavy Ion Collider (RHIC). Scientists working at RHIC, one of the world’s largest and most scientifically advanced particle colliders, have made a series of major discoveries about the nature of the early universe and the most fundamental constituents of matter.

The campaign — which included a press briefing at a national meeting of the American Physical Society and media tours of RHIC — was planned and executed by members of the Lab’s Media & Communications Office with the assistance of public relations consultants from Tartaglia Communications.

“These awards are particularly meaningful, as they are judged strictly by working journalists,” said Marge Lynch, Assistant Laboratory Director for Community, Education, Government, and Public Affairs. “They validate not just the leading-edge science here at the Lab and at RHIC, but the credibility and trust-based relationships our media and communications staff and agency colleagues have with leading science journalists.”

According to publisher Bulldog Reporter, which gives the Bulldog Awards, “Winners were chosen from hundreds and hundreds of entries representing the very best strategic and tactical prowess that PR and corporate communications has to offer. Campaigns were judged by dozens of working journalists, who assessed them on the basis of their ability to achieve extraordinary visibility and influence opinion, as well as on their creativity, command of media and technology, and tenacity.”

In the award-winning campaign, Brookhaven Lab and its communications counsel developed and executed a strategy to announce two major results related to RHIC scientists’ quest for the primordial matter known as quark-gluon plasma (QGP) through RHIC’s high-speed collisions of heavy ions. Scientists believe such a quark-gluon plasma filled the early universe some 14 billion years ago, before ordinary constituents of matter such as protons and neutrons — let alone stars, planets, and galaxies — ever formed.

The first new finding was that collisions at RHIC had created the hottest temperature ever seen in a lab, hotter than the temperature required to create QGP. The second finding was that this “quark soup” showed evidence of forming “bubbles” in which two of the universe’s fundamental “laws” of symmetry are violated, with possible implications for understanding symmetry violations that occurred in the very early universe.

The Lab’s communications team partnered with the American Physical Society (APS) to announce these tantalizing results at the February 2010 APS meeting in Washington, DC, with a press briefing specifically designed to communicate the results to science journalists covering the meeting. This format gave the journalists direct access to the RHIC scientists at the press event and during follow-up interviews. Results were further discussed during a subsequent tour of RHIC co-sponsored by Science Writers in New York, the New York chapter of the National Association of Science Writers.

These strategies generated in-depth coverage of the RHIC discoveries in more than 400 major news outlets worldwide, and resultant global visibility for RHIC’s leading-edge science. Social media engagement further expanded the campaign’s reach through tens of thousands of Twitter retweets and YouTube viewings of a RHIC animation prepared specifically for the announcement.

In 2005, RHIC scientists had made major news by announcing that the primordial matter created at RHIC was a “perfect liquid,” rather than the expected gas, surprising the scientific community and challenging notions about the nature of the early universe. The Brookhaven Lab communications team hoped to bring journalists’ attention to the new, equally important discoveries by building on that earlier interest.

“In these times of ever-increasing pressures on federal budgets, it is critical to convey to the tax-paying public, in clear and compelling ways, the wonder and the relevance of the sometimes complex science we do with their support,” said Steven Vigdor, Brookhaven’s Associate Laboratory Director for Nuclear and Particle Physics, who oversees the research program at RHIC. “Brookhaven’s Media & Communications Office has been fantastic in working with the detail-oriented RHIC scientists to communicate the big picture effectively. The enthusiastic international media response to the 2010 RHIC press event far exceeded my most optimistic expectations.”

Research at RHIC is funded primarily by the U.S. Department of Energy’s Office of Science and by various national and international collaborating institutions, with support from many funding agencies.