The following news release highlights award-winning imaging devices funded by the Office of Basic Energy Sciences (BES) within the U.S. Department of Energy Office of Science. BES plays a critical role in supporting detector research and development. New detectors are essential to sustaining innovative science in the U.S. 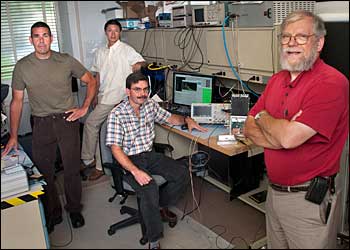 R&D Magazine gives R&D 100 Awards annually to the top 100 technological achievements of the year. Typically, these are innovations that transform basic science into useful products. The awards will be presented on October 13, in Orlando, Florida.

Brookhaven is one of 13 DOE labs, sites, and facilities that have won a total of 36 R&D 100 Awards this year. “I want to congratulate this year’s R&D 100 Award winners. The Department of Energy’s national laboratories and sites are at the forefront of innovation, and it is gratifying to see their work recognized once again,” said Energy Secretary Steven Chu. “The cutting-edge research and development done in our national labs and facilities is helping to meet our energy challenges, strengthen our national security and enhance our economic competitiveness.” 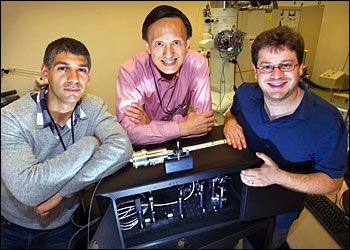 (From left) Brookhaven National Laboratory’s Matt Sfeir, Yimei Zhu, and Jonathan Rameau show off the award-winning multimodal optical nanoprobe. Mirko Milas, a former postdoctoral fellow at Brookhaven Lab who played a key role in developing the device, was unavailable for the photo.

One of Brookhaven's awards was given for a device that will enhance studies that use x-ray fluorescence, a powerful technique often used in the biological, environmental and geological sciences for measuring trace element concentrations in a sample. It's also a way to shed light on the complexities of archeological and historical artifacts. A major roadblock, however, is the time it takes to scan the object of interest, as the system¹s small x-ray spot is manually moved from one location to another.

At the Brookhaven Lab's National Synchrotron Light Source (NSLS), researchers from Brookhaven and the Commonwealth Scientific and Industrial Research Organisation (CSIRO) in Australia developed an "on-the-fly" device called the Maia x-ray microprobe detector system. Now being implemented in the Australian Synchrotron and the NSLS, the non-destructive system, which is about 1,000 times faster than previous methods, has been used to image everything from soil deposits to barley grain, to paintings created by Bertha Lum, Edward Hopper, and Rembrandt. In all cases, it has reduced the amount of experimental time that's required from days to hours.

“This method allows us to scan the sample continuously along a line,” said Brookhaven physicist Peter Siddons, one of the primary developers along with Chris Ryan from CSIRO. “The exposure time is just a few milliseconds at each point, so it never really stops moving. However, we collect full spectral data as we go. That not only makes it fast, but allows a high-quality quantitative analysis as well.”

Ryan added, “Maia has been a wonderful international collaboration spanning eight years and bringing together the complementary talents and shared enthusiasm of specialists from Brookhaven National Laboratory in the U.S. and the CSIRO in Australia. It’s been productive, exciting, and a pleasure to work with these creative people.”

The second technology recognized is a device called the multimodal optical nanoprobe, developed by Brookhaven researchers with a Swedish company, Nanofactory Instruments AB. It is used in a transmission electron microscope to measure numerous properties of a sample simultaneously, in addition to imaging.

When mounted on a transmission electron microscope, the multimodal optical nanoprobe provides simultaneous measurements of optical, electrical, mechanical, and structural properties of nano-sized materials and devices that are magnified from 1,000 to 50 million times. The combination of several different measurement techniques in the probe provides a new level of material characterization that is not possible by sequential application of those techniques. Further, these capabilities have been streamlined into a single package that, at minimal expense and difficulty, can be integrated into nearly any electron microscopy system.

The system can be divided into several sections that can be optimized for a particular set of experiments. It can be used in numerous types of experiments in many scientific fields.

Brookhaven Lab’s Yimei Zhu, leader of the team that developed the nanoprobe with Nanofactory Instruments AB Chief Technology Officer Johan Angenete and his associates, said, “There are multiple applications for the nanoprobe. In particular, it allows us to shine light and measure electric current on the sample while examining its structure at atomic resolution, thus correlating properties of materials or devices with their structure. This unprecedented microscopy capability has been long desired in photovoltaics research for improving the efficiency of solar panels. Also, the device can be used for studying defects and deformation behavior of functional nanomaterials, and for imaging biological structures, such as proteins, with minimal damage to the sample.”

Lennart Johansson, CEO of Nanofactory Instruments AB, said, “We are proud to have developed this groundbreaking technology with Yimei Zhu and his team at Brookhaven National Laboratory. There is a rapidly growing market for this kind of product, and we are pleased to be able to supply this much-needed device.”

The DOE Office of Science funded the development of both devices, with CSIRO providing additional funding for the development of the Maia x-ray microprobe detector. Brookhaven Lab designed the laser system and holder for the multimodal optical nanoprobe. Also, Brookhaven built the laser system and funded the construction of the device’s holder by Nanofactory Instruments AB. Brookhaven Science Associates, the company that manages Brookhaven Lab for DOE, holds several patents on various aspects of Maia and has applied for a patent on the nanoprobe.