The following news release is being issued by the U.S. Department of Energy’s Fermi National Accelerator Laboratory about new results from the MINOS experiment. In addition to participating in the conceptual development of MINOS, scientists at Brookhaven National Laboratory, led by physicist Milind Diwan, conduct data analysis and assist with daily operation and monitoring of the experiment. For more information about Brookhaven’s role, contact Kendra Snyder, 631-344-8191, ksnyder@bnl.gov, or Peter Genzer, 631-344-3174, genzer@bnl.gov. 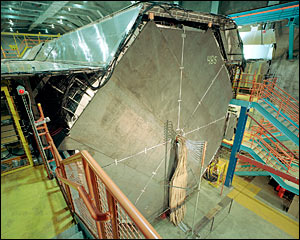 The MINOS far detector is located in a cavern half a mile underground in the Soudan Underground Laboratory, Minnesota. The 100-foot-long MINOS far detector consists of 486 massive octagonal planes, lined up like the slices of a loaf of bread. Each plane consists of a sheet of steel about 25 feet high and one inch thick, with the last one visible in the photo. The whole detector weighs 6,000 tons. Since March 2005, the far detector has recorded neutrinos from a beam produced at Fermilab. The MINOS collaboration records about 1,000 neutrinos per year.

BATAVIA, Illinois — The physics community got a jolt last year when results showed for the first time that neutrinos and their antimatter counterparts, antineutrinos, might be the odd man out in the particle world and have different masses. This idea was something that went against most commonly accepted theories of how the subatomic world works.

A result released today (August 25) from the MINOS experiment at the Department of Energy’s Fermi National Accelerator Laboratory appears to quell concerns raised by a MINOS result in June 2010 and brings neutrino and antineutrino masses more closely in sync.

By bringing measurements of neutrinos and antineutrinos closer together, this new MINOS result allows physicists to lessen the potential ramifications of this specific neutrino imbalance. These ramifications include: a new way neutrinos interact with other particles, unseen interactions between neutrinos and matter in the earth and the need to rethink everything known about how the universe works at the tiniest levels.

“This more precise measurement shows us that these particles and their antimatter partners are very likely not as different as indicated earlier. Within our current range of vision it now seems more likely that the universe is behaving the way most people think it does," said Rob Plunkett, Fermilab scientist and co-spokesman of MINOS. “This new, additional information on antineutrino parameters helps put limits on new physics, which will continue to be searched for by future planned experiments.”

MINOS nearly doubled its data set since its June 2010 result from 100 antineutrino events to 197 events. While the new results are only about one standard deviation away from the previous results, the combination rules out concerns that the previous results could have been caused by detector or calculation errors. Instead, the combined results point to a statistical fluctuation that has lessened as more data is taken.

“The previous results left a 2 percent chance that the neutrino and antineutrino masses were the same. This disagrees with what theories of how neutrinos operate predicted,” Thomas said. “So we have spent almost a year looking for some instrumental effect that could have caused the difference. It is comforting to know that statistics were the culprit.”

Because several neutrino experiments operating and planned across the globe rely on neutrino and antineutrino measurements being the same as part of their calculations, the new MINOS result hopefully removes a potential hurdle for them.

Fermilab's accelerator complex is capable of producing intense beams of either muon antineutrinos or muon neutrinos to send to the two MINOS detectors, one at Fermilab and one in Minnesota. This capability allows the experimenters to measure the mass difference parameters. The measurement also relies on the unique characteristics of the MINOS far detector, particularly its magnetic field, which allows the detector to separate the positively and negatively charged muons resulting from interactions of antineutrinos and neutrinos, respectively.

The antineutrinos’ extremely rare interactions with matter allow most of them to pass through the Earth unperturbed. A small number, however, interact in the MINOS detector, located 735 km away from Fermilab in Soudan, Minnesota. During their journey, which lasts 2.5 milliseconds, the particles oscillate in a process governed by a difference between their mass states.

Further analysis will be needed by the upcoming Fermilab neutrino experiments NOvA and MINOS+ to close the mass difference even more. Both experiments will use an upgraded accelerator beam generated at Fermilab that will emit more than double the number of neutrinos. This upgraded beam is expected to start operating in 2013.

The MINOS experiment involves more than 140 scientists, engineers, technical specialists and students from 30 institutions, including universities and national laboratories, in five countries: Brazil, Greece, Poland, the United Kingdom and the United States. Funding comes from: the Department of Energy’s Office of Science and the National Science Foundation in the U.S., the Science and Technology Facilities Council in the U.K; the University of Minnesota in the U.S.; the University of Athens in Greece; and Brazil's Foundation for Research Support of the State of São Paulo (FAPESP) and National Council of Scientific and Technological Development (CNPq).

Fermilab is a national laboratory supported by the Office of Science of the U.S. Department of Energy, operated under contract by Fermi Research Alliance, LLC.