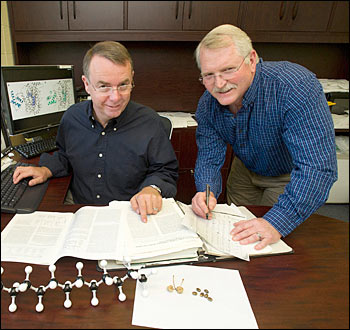 John Shanklin and Ed Whittle with a fatty acid molecule model and plant seeds and casings in the foreground.

UPTON, NY — Scientists at the U.S. Department of Energy’s (DOE) Brookhaven National Laboratory and collaborators at the Karolinska Institute in Sweden have discovered how an enzyme “knows” where to insert a double bond when desaturating plant fatty acids. Understanding the mechanism — which relies on a single amino acid far from the enzyme’s active site — solves a 40-year mystery of how these enzymes exert such location-specific control. The work, published in the Proceedings of the National Academy of Sciences the week of September 19, 2011, may lead to new ways to engineer plant oils as a renewable replacement for petrochemicals.

“Plant fatty acids are an approximately $150-billion-dollar-a-year market,” said Brookhaven biochemist John Shanklin, lead author on the paper. “Their properties, and therefore their potential uses and values, are determined by the position of double bonds in the hydrocarbon chains that make up their backbones. Thus the ability to control double bond positions would enable us to make new designer fatty acids that would be useful as industrial raw materials.”

The enzymes responsible for double-bond placement, called desaturases, remove hydrogen atoms and insert double bonds between adjacent carbon atoms at specific locations on the hydrocarbon chains. But how one enzyme knows to insert the double bond at one location while a different but closely related enzyme inserts a double bond at a different site has been a mystery.

“Most enzymes recognize features in the molecules they act on that are very close to the site where the enzyme’s action takes place. But all the carbon-hydrogen groups that make up fatty-acid backbones are very similar with no distinguishing features — it’s like a greasy rope with nothing to hold onto,” said Shanklin.

In describing his group’s long-standing quest to solve the desaturation puzzle, Shanklin quotes Nobel laureate Konrad Bloch, who observed more than 40 years ago that such site-specific removal of hydrogen “would seem to approach the limits of the discriminatory power of enzymes.”

Models of the complete desaturase-substrate complexes: A shows the castor desaturase (grey “ribbon”) with the fatty acid (light blue “stick” molecule) attached to ACP (dark blue). The aspartic amino acid is highlighted in yellow. B shows the ivy desaturase (grey) with the fatty acid (teal “stick” molecule) attached to ACP (green), and the amino acid lysine highlighted in yellow. In both figures, the shaded area around the fatty acid represents the surface of the substrate-binding cavity. The diagrams show that substituting lysine for aspartic acid changes the binding configuration, allowing the fatty acid chain to further penetrate the binding cavity. Thus this single amino-acid switch results in desaturation at a different site.

The next step was to look at how the two enzymes bind to their substrates — fatty acid chains attached to a small carrier protein. First the scientists analyzed the crystal structure of the castor desaturase bound to the substrate. Then they used computer modeling to further explore how the carrier protein “docked” with the enzyme.

“Results of the computational docking model exactly matched that of the real crystal structure, which allows carbon atoms 9 and 10 to be positioned right at the enzyme’s active site,” Shanklin said.

To identify exactly what was responsible for the difference in binding, the scientists then looked at the amino acid sequence — the series of 360 building blocks that makes up each enzyme. They identified amino acid locations that differ between delta-9 and delta-4 desaturases, and focused on those locations that would be able to interact with the substrate, based on their positions in the structural models.

The scientists identified one position, far from the active site, where the computer model indicated that switching a single amino acid would change the orientation of the bound fatty acid with respect to the active site. Could this distant amino-acid location remotely control the site of double bond placement?

To test this hypothesis, the scientists engineered a new desaturase, swapping out the aspartic acid normally found at that location in the delta-9 castor desaturase for the lysine found in the delta-4 ivy desaturase. The result: an enzyme that was castor-like in every way, except that it now seemed able to desaturate the fatty acid at the delta-4 carbon location. “It’s quite remarkable to see that changing just one amino acid could have such a striking effect,” Shanklin said.

Understanding this mechanism led Ed Whittle, a research associate in Shanklin’s lab, to add a second positive charge to the castor desaturase in an attempt to further strengthen the attraction. The result was a nearly complete switch in the castor enzyme from delta-9 to delta-4 desaturation, adding compelling support for the remote control hypothesis.

“I really admire Ed’s persistence and insight in taking what was already a striking result and pushing it even further to completely change the way this enzyme functions,” Shanklin said.

“It’s very rewarding to have finally solved this mystery, which would not have been possible without a team effort drawing on our diverse expertise in biochemistry, genetics, computational modeling, and x-ray crystallography.

“Using what we’ve now learned, I am optimistic we can redesign enzymes to achieve new desirable specificities to produce novel fatty acids in plants. These novel fatty acids would be a renewable resource to replace raw materials now derived from petroleum for making industrial products like plastics,” Shanklin said.

This work was funded by the DOE Office of Science. Additional collaborators include: Jodie Guy, Martin Moche, and Ylva Lindqvist of the Karolinska Institute, and Johan Lengqvist, now at AstraZeneca R&D in Sweden. The scientists analyzed crystal structures at several synchrotrons including: the National Synchrotron Light Source (NSLS) at Brookhaven National Laboratory, the European Synchrotron Radiation Facility (ESRF) in France, the Deutsches Elektronen-Synchrotron (DESY), and the MAX-lab National Laboratory for Synchrotron Radiation in Sweden.