Orion Weiss and Anna Polonsky to Perform at Brookhaven Lab, 11/09 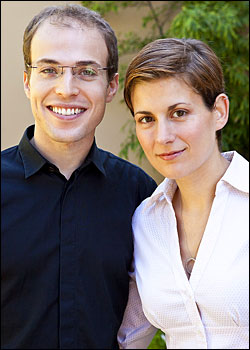 UPTON, NY — Pianists Orion Weiss and Anna Polonsky will perform duets by Schubert, Schumann, and Ravel in a concert at the U.S. Department of Energy's Brookhaven National Laboratory on Wednesday, November 9, at noon in Berkner Hall. Sponsored by Brookhaven Science Associates, the concert is free and open to the public. All visitors to the Laboratory 16 and older must bring a photo I.D.

Orion Weiss was named the 2010 Classical Recording Foundation's Young Artist of the Year. He is one of the most sought-after soloists in his generation of young American musicians. This year he will perform with the Baltimore Symphony, Toronto Symphony and Slovenian Philharmonic Orchestras. In 1999, with less than 24 hours' notice, Mr. Weiss stepped in to replace André Watts for a performance of Shostakovich's Piano Concerto No. 2 with the Baltimore Symphony Orchestra. He was immediately invited to return to perform the Tchaikovsky Piano Concerto that year. In 2004 he graduated from the Juilliard School, where he studied with Emanuel Ax. His impressive list of awards includes the Gilmore Young Artist Award, an Avery Fisher Career Grant, the Gina Bachauer Scholarship at the Juilliard School, and the Mieczyslaw Munz Scholarship.

Anna Polonsky is widely in demand as a soloist and chamber musician and has performed at venues such as the Amsterdam Concertgebouw, the Vienna Konzerthaus, Alice Tully Hall, and Carnegie Hall's Stern, Weill, and Zankel Halls. A frequent guest at the Chamber Music Society of Lincoln Center, she was a member of Chamber Music Society Two during the 2002-2004 seasons. In 2006 she took part in the European Broadcasting Union's project to record and broadcast all of Mozart's keyboard sonatas, and in 2007 she gave a solo recital at Carnegie Hall to inaugurate the Emerson Quartet's Perspective Series. Anna Polonsky received degrees from the Curtis Institute and the Juilliard School where she worked with Peter Serkin and Jerome Lowenthal, respectively. She serves on the piano faculty at Vassar College.