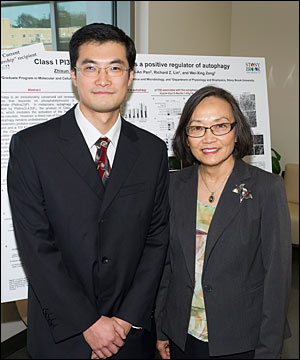 Established to honor the distinguished late Brookhaven Lab scientist for whom it was named, the scholarship consists of $1,000 and a plaque. Dou received the award at a ceremony held at Brookhaven Lab on October 6.

Activated in response to various cellular stresses, autophagy is a normal process in which cells break down their own components. The balanced functioning of autophagy is essential in preventing several human diseases, including cancer and Parkinson’s disease. Dou found that a class of enzyme known as lipid kinase plays a critical role in regulating autophagy. This finding was published in the November 15, 2010 edition of the Journal of Cell Biology, and Dou received the 2010 Abrahams Award for Outstanding Achievement by a Graduate Student for the discovery.

“I am grateful to receive this scholarship,” Dou said. “After I receive my Ph.D., I plan to continue training as a post-doctorate fellow in an academic laboratory. I would like to establish my own laboratory to study human diseases, such as cancer and diabetes, and I hope my research on cell metabolism will contribute to novel therapies in preventing and curing diseases.”

Dou earned a B.S. in biological sciences from Nankai University in Tianjin, China, and he enrolled in Stony Brook’s graduate program in molecular and cellular biology in 2007. He expects to receive his Ph.D. in 2012.