UPTON, NY — The more gray matter you have in the decision-making, thought-processing part of your brain, the better your ability to evaluate rewards and consequences. That may seem like an obvious conclusion, but a new study conducted at the U.S. Department of Energy’s Brookhaven National Laboratory is the first to show this link between structure and function in healthy people — and the impairment of both structure and function in people addicted to cocaine. The study appears in the Journal of Cognitive Neuroscience. 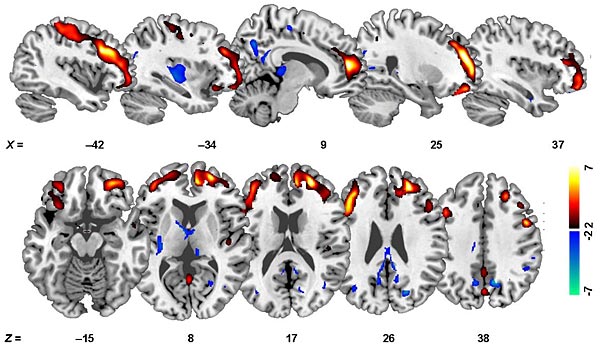 Structural analysis of the MRI scans was performed using voxel-based morphometry (VBM). VBM is a whole-brain, fully automated, unbiased and operator-independent MRI analysis technique that is commonly used to detect regionally specific differences in brain tissue composition using voxel-wise comparisons. The gray matter tissue probability from each voxel was then correlated with the P300 amplitude difference between the highest monetary reward (45 cents per correct response) and no money (0 cents) conditions of a sustained attention task. The red/orange/yellow highlights on these brain scans indicate the regions where the correlation between gray matter volume and differential P300 response was quite strong in healthy control subjects but weak or nonexistent in cocaine-addicted individuals — the dorso-lateral and ventro-lateral prefrontal cortex, anterior cingulate cortex, and the orbitofrontal cortex, which are known to be functionally involved in reward processing and decision-making. These results suggest that the structural integrity of the prefrontal cortex modulates electrocortical sensitivity to monetary reward. Impairments in these regions may also be related to decreased ability to assess and respond to other modulated rewards and consequences, such as those associated with using addictive drugs.

“This study documents for the first time the importance to reward processing of gray matter structural integrity in the parts of the brain’s prefrontal cortex that are involved in higher-order executive function, including self-control and decision-making,” said Muhammad Parvaz, a post-doctoral fellow at Brookhaven Lab and a co-lead author on the paper.

“Previous studies conducted at Brookhaven and elsewhere have explored the structural integrity of the prefrontal cortex in drug addiction and the functional components of reward processing, but these studies were conducted separately,” Parvaz said. “We wanted to know whether the specific function of reward processing could be ‘mapped’ onto the underlying brain structure — whether and how these two are related,” he added.

Differences in gray matter volume — the amount of brain matter made up of nerve cell bodies, as opposed to the “white matter” axons that form the connections between cells — have been observed in a range of neuropsychiatric diseases when compared with healthy states, explained Anna Konova, the other co-lead author on the paper. “We wanted to know more about what these differences mean functionally in healthy individuals and in drug-addicted individuals,” she said.

To explore this structure-function relationship, the scientists performed magnetic resonance imaging (MRI) brain scans to measure brain volume in 17 healthy people and 22 cocaine users. The scans collect structural measurements for the entire brain, and can be analyzed voxel-by-voxel — the equivalent of three-dimensional pixels — to get detailed measurements for individual brain regions.

Within a short period of the MRI scans, the scientists also used electrodes placed on the research subjects’ scalps to measure a particular electrical signal known as the P300 (an event-related potential derived from an ongoing electroencephalogram, or EEG, that is time-locked to a particular event). This specific measure can index brain activity related to reward processing. During these electrical recordings, the subjects performed a timed psychological task (pressing buttons according to a specific set of rules) with the prospect of earning varying levels of monetary reward, from no money up to 45 cents for each correct response with a total potential reward of $50.

Previous studies by the research team have shown that, in healthy subjects, the P300 signal increases in magnitude with the amount of monetary reward offered. Cocaine-addicted individuals, however, do not exhibit this differential response in the P300 measure of brain activity, even though they, like the healthy subjects, rate the task as more interesting and exciting when the potential reward is greater.

The current study extended these results by linking them for the first time with the structural measurements.

The scientists used statistical methods to look for correlations between the difference in brain activity observed in the high-reward and no-reward conditions — how much the brain’s P300 response changed with increasing reward — and the gray matter volume in various parts of the brain as measured voxel-by-voxel in the MRI scans.

In the healthy subjects, the magnitude of change in the P300 signal with increasing reward was most strongly correlated with the volume of gray matter in three regions of the prefrontal cortex.

“The higher the gray matter volume in those particular regions, the more brain activity increased for the highest monetary reward as compared to the non-reward condition,” Konova said.

The cocaine-addicted individuals had reduced gray matter volume in these regions compared with the healthy subjects, and no detectable differences between the reward conditions in the P300 measure of brain activity. There were also no significant correlations between the former and latter — structure and function measures — in the cocaine-addicted subjects.

“These findings suggest that impaired reward processing may be attributed to deficits in the structural integrity of the brain, particularly in prefrontal cortical regions implicated in higher order cognitive and emotional function,” Parvaz said. “This study therefore validates the use of the structural measures obtained by MRI as indicative of functional deficits.”

The implications are important for understanding the potential loss of control and disadvantageous decision-making that can occur in people suffering from drug addiction, Konova explained: “These structure-function deficits may translate into dysfunctional behaviors in the real world. Specifically, impaired ability to compare rewards, and reduced gray matter in the prefrontal cortex, may culminate in the compromised ability to experience pleasure and to control behavior, especially in high-risk situations — for example, when craving or under stress — leading individuals to use drugs despite catastrophic consequences.”

The authors acknowledge that there are still questions about whether these changes in brain structure and function are a cause or a consequence of addiction. But the use of multimodal imaging techniques, as illustrated by this study, may open new ways to address these and other questions relevant to understanding human motivation in both health and disease states, with particular relevance to treating drug addiction.