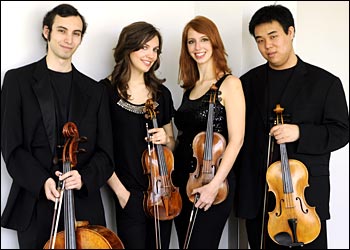 UPTON, NY — The Linden String Quartet, a winner of the 2010 Concert Artists Guild (CAG) Victor Elmaleh Competition, will perform with CAG award-winning pianist Michael Brown in a concert at the U.S. Department of Energy's Brookhaven National Laboratory on Wednesday, March 7, at noon in Berkner Hall. Sponsored by Brookhaven Science Associates, the concert is free and open to the public. All visitors to the Laboratory 16 and older must bring a photo I.D.

Founded in spring 2008, the Quartet has enjoyed remarkable success, winning the Gold Medal and Grand Prize of the 2009 Fischoff National Chamber Music Competition, the Coleman-Barstow Prize at the 2009 Coleman National Chamber Ensemble Competition, First Prize at the 2010 Hugo Kauder Competition, and, most recently, the ProQuartet Prize at the 9th Borciani International String Quartet Competition. Praised for its “remarkable depth of technique and brilliantly nuanced, sumptuous tonality delivered with a palpable, infectious joy” (MusicWeb International), the Linden Quartet is currently the Graduate String-Quartet-in-Residence at Yale University, where the ensemble is mentored by the Tokyo String Quartet. Highlights of the 2011-12 season include concerts in New York at Carnegie Hall’s Weill Recital Hall (produced by CAG) and at Merkin Concert Hall and two concerts at the Caramoor Center for Music and the Arts. 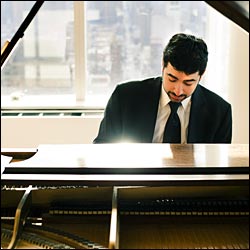 Hailed as a “vividly characterized and rhythmically free-spirited” pianist by The New York Times, Michael Brown is the First Prize Winner of the 2010 CAG Victor Elmaleh Competition. He has appeared in many major venues including Carnegie Hall and Avery Fisher Hall, and has appeared as soloist with the Juilliard Orchestra at Alice Tully Hall under the baton of New York Philharmonic Music Director Alan Gilbert. In 2012, Mr. Brown will give recitals at Carnegie Hall as part of the CAG Winners Series. An accomplished composer, Mr. Brown was awarded the 2009 Palmer-Dixon Prize from Juilliard and his works have been performed internationally by various ensembles.

At the Brookhaven performance, the Quartet will perform Bartok's remarkable Quartet No. 3, Mr. Brown will perform short solo works by Ravel, and then the forces will combine in a performance of the popular Piano Quintet Op. 44 of Robert Schumann.