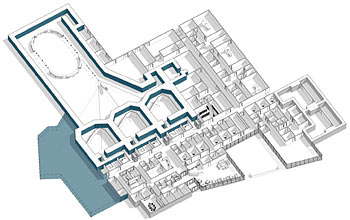 The iRCMS sits at the top left corner of this proposed hospital layout, rapidly accelerating ions and sending them through three independent beam lines to deliver advanced cancer therapy to patients.

UPTON, NY – A new collaboration between the U.S. Department of Energy’s Brookhaven National Laboratory and Best Medical International (BMI) aims to design one of the most dynamic and effective cancer therapy devices in the world. The ion Rapidly Cycling Medical Synchrotron (iRCMS) draws on the particle acceleration expertise of Brookhaven Lab physicists and the medical experience of BMI to advance cancer therapy, particularly the evolving use of carbon and other light ions.

“We believe a machine capable of delivering both protons and carbon ions will fill the gap in the particle therapy available to cancer patients in this country,” said Joseph Lidestri, a chief consultant for BMI and senior scientist at the New York Structural Biology Center. “Ion therapy has proven itself as a valuable option, providing improved control with less collateral damage for patients with resistant diseases. This new device will open new and potentially more effective pathways through carbon and other ions.”

Synchrotrons, devices that accelerate particles along a circular path by synchronizing magnetic and electric fields, have proven useful in hospitals for their efficiency and ability to generate high quantities of finely-tuned particle beams. These energetic beams are used to bombard and destroy cancerous tumors. The iRCMS, a 64-meter particle racetrack, will be unique in the field because it rapidly cycles at 15 Hertz, allowing the ion beam to deposit energy throughout an entire longitudinal column with each cycle. This delivery method has the distinct potential to strike each layer of a cancerous tumor in a single treatment cycle.

The partnership was formed under a Cooperative Research and Development Agreement (CRADA), designed to link the private sector with the unique capabilities of government research facilities. Ultimately, the research and development funded by BMI and conducted at Brookhaven Lab will provide the prototype for the iRCMS, which will lead to large-scale manufacturing and installation in cancer treatment facilities. 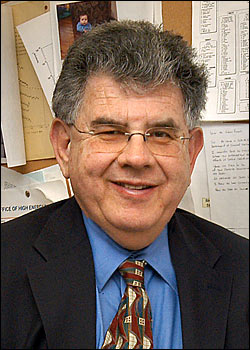 “They’re depending on us for the accelerator design, and we’re depending on them to tell us what the medical world needs,” said Derek Lowenstein, Associate Chair for Applications and Education in Brookhaven Lab’s Collider-Accelerator Department and the lead coordinator of the CRADA. “This builds upon our history of invention and accelerator expertise, from the Cosmotron in the 1950s to the Relativistic Heavy Ion Collider.”

Best Medical International, founded in 1977 in Springfield, Va., specializes in the development and manufacturing of a broad range of cancer treatment technologies. Founder Krishnan Suthanthiran’s mission is to provide the global medical community with high quality, cost-effective treatment options ranging from brachytherapy to particle therapy. There is a particular challenge in delivering affordable advanced technologies such as ion therapy, Lidestri said, which is why Suthanthiran decided to privately fund the development of iRCMS at Brookhaven.

BMI first became interested in a partnership because of Brookhaven Lab’s demonstrated skill with synchrotrons and a history of pushing that technology into new frontiers. Physicists at the Lab made earlier breakthroughs in advancing ion therapy, including patents on highly efficient and compact particle-delivery systems (see links).

The first phase of the CRADA generated a Conceptual Design Report, initially expected to be a proton therapy synchrotron. But BMI suggested early on that a more versatile machine, capable of firing carbon and other ions, would be most beneficial to patients.

The efficacy of ion therapy is based upon the fact that the energy of the proton and other ion beams can be adjusted so they deposit most of their destructive energy directly on a cancerous tumor while leaving nearby healthy tissue unscathed. X-rays, on the other hand, deposit large amounts of energy over their entire pathway through human tissue. This results in healthy tissue being damaged as the X-rays travel en route to the cancerous tissue and after they exit the tumor. Charged ions minimize this collateral damage as they can be tuned to spike at a specific depth, thus minimizing healthy cell damage on either side of the targeted tumor.

Protons were the first particles used — and remain in widespread use — but carbon offers more precise beams and reduces the scattering characteristic of protons. The heavier carbon ions will require a maximum total energy of 4,800 million-electron-volts (MeV) to penetrate to depths of 27 centimeters, making this new synchrotron larger and more demanding than the proton-only machines that typically need only 206 MeV for comparable penetration. While carbon will likely be the preferred particle for the new device, it will also be capable of accelerating and aiming protons and other light ions should they prove more viable for particle therapy.

Members of both teams emphasized that carbon ion therapy, which has seen great success in Germany and Japan but needs further clinical testing, will not render other treatments useless. “This is another tool for doctors, a very advanced and complicated instrument that we believe will prove unbeatable for a range of challenges,” Lidestri said. “We’re not promising a cure-all or ‘silver bullet’ for cancer treatment, but the iRCMS does have distinguishing features that will result in the advancement of particle therapy.”

The collaboration is currently in phase two, with Brookhaven Lab beginning to build a series of magnets, radio frequency acceleration cavities, and a power supply for the rapid cycling of the synchrotron. The team expects to have a working accelerator prototype in approximately three years, with the addition of medical delivery hardware following shortly thereafter.

“We typically only build one-of-a kind machines,” said Lowenstein, who has enjoyed the challenge of applying accelerator physics to a problem immediately facing humanity. “In the end, BMI will take ownership of the technology that we invent and provide this new treatment to patients at several hospital locations.”

Added Lidestri, “The possibility to show that industries and national laboratories can successfully collaborate and combine their strengths on this scale – that will be a victory as important as completing the iRCMS.”