Room-temperature reaction takes place in water; can switch from hydrogen storage to release by changing pH 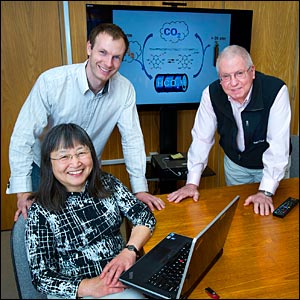 UPTON, NY — Scientists at the U.S. Department of Energy’s (DOE) Brookhaven National Laboratory and collaborators have developed a new catalyst that reversibly converts hydrogen gas and carbon dioxide to a liquid under very mild conditions. The work — described in a paper published online March 18, 2012, in Nature Chemistry — could lead to efficient ways to safely store and transport hydrogen for use as an alternative fuel.

Hydrogen is seen as an attractive fuel because it can efficiently be converted to energy without producing toxic products or greenhouse gases. However, the storage and transportation of hydrogen remain more problematic than for liquid hydrocarbon fuels. The new work builds on earlier efforts to combine hydrogen with carbon dioxide to produce a liquid formic acid solution that can be transported using the same kind of infrastructure used to transport gasoline and oil.

“This is not the first catalyst capable of carrying out this reaction, but it is the first to work at room temperature, in an aqueous (water) solution, under atmospheric pressure — and that is capable of running the reaction in forward or reverse directions depending on the acidity of the solution,” said Brookhaven chemist Etsuko Fujita, who oversaw Brookhaven’s contributions to this research.

“When the release of hydrogen is desired for use in fuel cells or other applications, one can simply flip the ‘pH switch’ on the catalyst to run the reaction in reverse,” said Brookhaven chemist James Muckerman, a co-author on the study. He noted that the liquid formic acid might also be used directly in a formic-acid fuel cell.

Collaborator Yuichiro Himeda of the National Institute of Advanced Industrial Science and Technology (AIST) of Japan had been making substantial progress toward the goal of developing this type of catalyst for a number of years. He used iridium metal complexes containing aromatic diimine ligands (groups of atoms bound to the metal) with pendent, peripheral hydroxyl (OH) groups that can serve as acidic sites that release protons to become pendent bases.

Himeda recently entered into collaboration — via the U.S.-Japan Collaboration on Clean Energy Technology program — with Fujita, Muckerman, and Jonathan Hull (a Goldhaber Fellow working on Fujita’s team). The Brookhaven group carried out coordinated experimental and theoretical studies to understand the sequence of chemical steps by which these catalysts converted H2 and CO2 into formic acid. Their goal was to design new catalysts with improved performance.

The Brookhaven team’s key idea came from Nature: “We were inspired by the way hydrogen bonds and bases relay protons in the active sites of some enzymes,” Hull said. 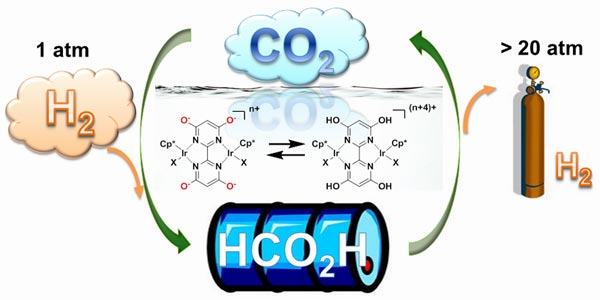 This diagram shows the new catalyst in its protonated and deprotonated states as it reversibly converts hydrogen and CO2 gas to and from liquid formate or formic acid at ambient temperature and pressure. The gases can thereby be stored and transported as a liquid, and used later in carbon-neutral energy applications, simply by adjusting the pH.

“Good catalysts efficiently move protons and electrons around, taking them from some molecules and placing them onto others to produce the desired product,” he explained. “Nature has many ways of doing this. Under the right conditions, the hydroxyl groups on the diimine ligand of the catalyst help hydrogen react with carbon dioxide, which is difficult to do. We thought we could improve the reactivity by placing the pendent bases near the metal centers, rather than in peripheral positions.”

Once the Brookhaven team understood how Himeda’s catalysts worked, Hull realized that a novel ligand that had been synthesized by collaborators Brian Hashiguchi and Roy Periana of The Scripps Research Institute for an entirely different purpose would possibly be ideal for accomplishing this goal. The Brookhaven group designed a new iridium metal catalyst incorporating this new ligand.

Collaborator David Szalda of Baruch College (City University of New York) determined the atomic level crystal structure of the new catalyst to “see” how the arrangement of its atoms might explain its function.

Tests of the new catalyst revealed superior catalytic performance for storing and releasing H2 under very mild reaction conditions. For the reaction combining CO2 with H2, the scientists observed high turnovers at room temperature and ambient pressure; for the catalytic decomposition of formic acid to release hydrogen, the catalytic rate was faster than any previous report.

“We were able to convert a 1:1 mixture of H2 and CO2 to formate (the deprotonated form of formic acid) at room temperature, successfully regenerate H2, and then repeat the cycle. It’s a design principle we are very fortunate to have found,” said Hull.

The regenerated high-pressure gas mixture (hydrogen and carbon dioxide) is quite pure; importantly, no carbon monoxide (CO) — an impurity that can ‘poison’ fuel cells and thus reduce their lifetime — was detected. Therefore, this method of storing and regenerating hydrogen might have a use in hydrogen fuel cells.

“This is a wonderful example of how fundamental research can lead to the understanding and control of factors that contribute to the solution of technologically important problems,” Muckerman concluded.

This research was funded by the DOE Office of Science, a Goldhaber Distinguished Fellowship, and by the Japanese Ministry of Economy, Trade, and Industry.