What was the universe like microseconds after the Big Bang? Can you catch an elusive neutrino in a watery liquid? What features will the world’s newest ultra-bright light source reveal? Scientists from the U.S. Department of Energy’s (DOE) Brookhaven National Laboratory and physicists closely following research there will present talks addressing these questions at the April 2012 meeting of the American Physical Society, March 31 – April 3, at the Hyatt Regency in Atlanta, GA.

Several talks will present recent analyses of data and discussion of results from the Relativistic Heavy Ion Collider (RHIC), an “atom smasher” at Brookhaven Lab that recreates conditions of the very early universe to explore the fundamental properties and interactions of matter. These talks will include new details about the nature of the “perfect” liquid quark-gluon plasma produced at RHIC. 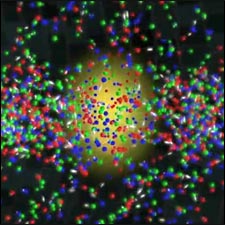 Explorations of how particle “jets” get “stuck” in the strongly coupled hydrodynamic matter (a.k.a. “perfect” liquid) produced in heavy ion collisions at RHIC and the Large Hadron Collider (LHC) in Europe, including computations that allow a direct link of theoretical calculations to experimental observables.

How lattice calculations are used to analyze hard-scattering processes that probe the properties and evolution of RHIC’s quark-gluon plasma and inform our general understanding of the thermodynamics of quantum chromodynamics, the theory that describes quark-gluon interactions via the strong force. 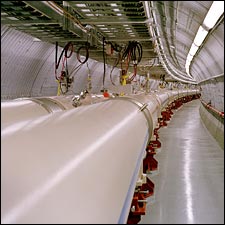 Why exploring the properties of the strong color fields that emerge in ions accelerated to near light speed at RHIC is essential to complete our understanding of what happens to quark-gluon matter in heavy ion collisions.

How the geometry of the initial interaction of colliding ions at RHIC influences resulting particle correlations and “flow,” from energies well below the threshold for transition to quark-gluon plasma to well above that threshold.

The Hottest, and Most Liquid, Liquid in the Universe
Krishna Rajagopal, Massachusetts Institute of Technology

A theorist’s perspective on the “hot quark soup” of the early universe produced at RHIC and the Large Hadron Collider (LHC) in Europe, its relation to ultra-cold atomic gases, and mathematical approaches derived from string theory being used to describe these seemingly unrelated extremes.

In addition to these talks showcasing RHIC physics, there will be presentations on neutrino physics and the design and capabilities of National Synchrotron Light Source II (NSLS-II), a new light source with world-leading brightness now under construction at Brookhaven Lab.

Highlights of the concept, preparation, and properties of a new type of scintillating liquid based on water, and how it could be used for a very large, but economical detector for applications ranging from fundamental physics, to neutrino physics, to neutron detection. 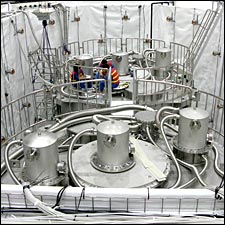 Update on Latest Results from the Daya Bay Neutrino Experiment

APS will host a press conference featuring scientists who recently announced the first results from the Daya Bay Reactor Neutrino Experiment, including the discovery of a new kind of neutrino transformation. Scientists from Brookhaven National Laboratory play multiple roles in this international project, including project management, data analysis, and perfecting the recipe for the chemically stable liquid that fills part of Daya Bay’s detectors. 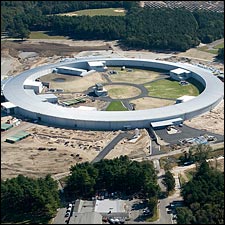 How the next generation of light sources, including NSLS-II, now under construction at Brookhaven National Laboratory, will provide nanoscale resolution and enable advances in a wide range of scientific fields including energy, environmental science, and biomedicine.

All of this research is supported in large part by the DOE Office of Science.