The U.S. Department of Energy's (DOE) Los Alamos National Laboratory has issued the following press release describing new methods to rapidly produce a cancer-treating isotope. Brookhaven National Laboratory was a partner in this research at Los Alamos, and the 200 MeV proton beam of the Brookhaven Linac Isotope Producer (BLIP) is ideally suited to further advance this method of producing the alpha-emitting isotope actinium-225. Suresh Srivastava, the head of Brookhaven’s Medical Isotope Research and Production Program, will publish work about the Lab’s intention to further develop this promising isotope and explore its cancer treatment potential in this May’s Seminars in Nuclear Medicine. For more information on Brookhaven’s role, contact Justin Eure at (631) 344-2347 or jeure@bnl.gov, or Peter Genzer at (631) 344-3174 or genzer@bnl.gov.

Cancer Therapy Gets a Boost From New Isotope 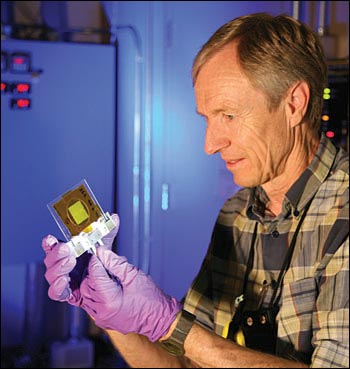 Los Alamos scientist Meiring Nortier holds a thorium foil test target for the proof-of-concept production experiments. Research indicates that it will bepossible to match current annual, worldwide production of Ac-225 in just two to five days of operations using the accelerator at Los Alamos and analogous facilities at Brookhaven.

Using proton beams, Los Alamos and its partner Brookhaven National Laboratory could match current annual worldwide production of the isotope in just a few days, solving critical shortages of this therapeutic isotope that attacks cancer cells. A collaboration between Los Alamos, Brookhaven, and Oak Ridge national laboratories is developing a plan for full-scale production and stable supply of Ac-225.

Ac-225 emits alpha radiation. Alpha particles are energetic enough to destroy cancer cells but are unlikely to move beyond a tightly controlled target region and destroy healthy cells. Alpha particles are stopped in their tracks by a layer of skin—or even an inch or two of air.

One of the primary barriers to wider use of Ac-225 has been the lack of an economically viable supply. Scientists at the LANL Isotope Production Facility (IPF) recently completed a successful research and development project in which they explored the accelerator-based production of the isotope. Since 2005, a primary mission for IPF has been production of medical imaging isotopes such as strontium-82 for positron emission tomography, known as PET scans. In addition to medical imaging applications, IPF has had the mission of making isotopes available for national security, environmental studies and a variety of industrial and R&D applications. The Ac-225 work is a first and important step toward the addition of IPF-produced isotopes for medical therapy applications.

The development of new cancer therapies such as Ac-225 was recognized by President Barack Obama in his 2012 State of the Union address, in which he cited the development of such new cancer therapies as Ac-22: "Today, the discoveries taking place in our federally financed labs and universities could lead to new treatments that kill cancer cells but leave healthy ones untouched."

New sources for the isotope are desperately needed, experts note. Ac-225 has historically been produced in an annual volume of between 600 and 800 millicuries through the natural decay of thorium 229 from uranium 233. But the current need for Ac-225 far outstrips the supply made possible by the traditional method of production, and annual demand could reach 100 times as much, perhaps 50,000 millicuries by 2014. In fact, the Nuclear Science Advisory Committee’s isotope group recently cited the gap between production and demand, saying that the United States should "invest in new production approaches of alpha emitters with highest priority for 225Ac."

The work by Los Alamos helps address the Nuclear Science Advisory Committee's recommendation has focused on production of research-scale quantities of Ac-225. Production is done by a specialized particle accelerator at the Los Alamos Neutron Science Center (LANSCE), by irradiating thorium target foils. Scientists use a 100 MeV (million-electron-volt) proton beam supplied to the Lab’s Isotope Production Facility and a 200-800 MeV beam supplied to LANL’s Weapons Neutron Research Facility—both of which are part of LANSCE.

"Preliminary experiments indicate that accelerator-based production will be viable at the scale required to support clinical applications," said Meiring Nortier, the lead LANL scientist on the project.

The Ac-225 effort is now shifting to the development of high-power targetry and bulk-scale radiochemical processing to potentially provide this material as a routinely available medical isotope. Los Alamos will be pursuing this goal in conjunction with research teams at Oak Ridge National Laboratory and Brookhaven National Laboratory.

The research indicates that it will be possible to match current annual worldwide production of Ac-225 in just two to five days using the accelerator at Los Alamos and similar facilities at Brookhaven. Estimates are that two to three years of production scale-up and process development will be required before Ac-225 can be produced routinely.

This project was funded by the U.S. Department of Energy Office of Science via an award from Office of Nuclear Physics, Isotope Development and Production for Research and Applications. The Los Alamos Isotope Program has generated isotopes since the 1970s, with production since 2005 coming from the IPF.

See a video on the subject at http://www.youtube.com/watch?v=E0r0-FJqmpc&feature=youtu.be

Los Alamos National Laboratory, a multidisciplinary research institution engaged in strategic science on behalf of national security, is operated by Los Alamos National Security, LLC, a team composed of Bechtel National, the University of California, The Babcock & Wilcox Company, and URS for the Department of Energy's National Nuclear Security Administration.