The U.S. Department of Energy’s (DOE) SLAC National Accelerator Laboratory has issued the following press release describing the “Critical Decision 1” approval for the Large Synoptic Survey Telescope (LSST). Brookhaven National Laboratory leads the design and construction of the “film” for the LSST camera, an advanced 3.2 gigapixel sensor array that will capture the light from 5 billion distant galaxies to image the entire night sky. For more information on the LSST and Brookhaven’s role in the collaboration, visit http://www.bnl.gov/LSST/ or contact Justin Eure at (631) 344-2347 or jeure@bnl.gov, or Peter Genzer at (631) 344-3174 or genzer@bnl.gov. 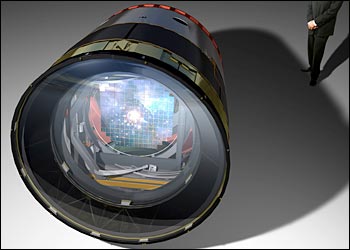 An artistic rendering of the Large Synoptic Survey Telescope, with a man standing beside for perspective of the camera's size. (Image courtesy LSST Project)

A 3.2 billion-pixel digital camera designed by SLAC is now one step closer to reality. The Large Synoptic Survey Telescope camera, which will capture the widest, fastest and deepest view of the night sky ever observed, has received “Critical Decision 1” approval by the U.S. Department of Energy (DOE) to move into the next stage of the project.

The Large Synoptic Survey Telescope (LSST) will survey the entire visible sky every week, creating an unprecedented public archive of data – about 6 million gigabytes per year, the equivalent of shooting roughly 800,000 images with a regular eight-megapixel digital camera every night, but of much higher quality and scientific value. Its deep and frequent cosmic vistas will help answer critical questions about the nature of dark energy and dark matter and aid studies of near-Earth asteroids, Kuiper belt objects, the structure of our galaxy and many other areas of astronomy and fundamental physics.

“With 189 sensors and over 3 tons of components that have to be packed into an extremely tight space, you can imagine this is a very complex instrument,” said Nadine Kurita, the project manager for the LSST camera at SLAC. “But given the enormous challenges required to provide such a comprehensive view of the universe, it’s been an incredible opportunity to design something so unique.”

Now that the LSST camera has passed Critical Decision 1, the project begins a detailed engineering design, schedule, and budget phase. While the DOE funds the design and construction of the camera, the full cost and logistics of the new telescope are being shared by the DOE and the National Science Foundation, as well as a large partnership of public and private organizations in the United States and abroad.

“This is the culmination of years of work by a large group of dedicated people,” said SLAC’s Steven Kahn, LSST deputy project director and leader of the DOE-funded effort on LSST. “I’ve personally been working on this since 2003, and it is tremendously satisfying to finally see this move forward to the point when we can begin to carry out the project.”

If all continues as planned, construction on the telescope will begin in 2014. Preliminary work has already started on LSST’s 8.4-meter primary mirror and its final site atop Cerro Pachón in northern Chile.

As the primary component of all energy in the universe, the still-mysterious dark energy is perhaps the most important research target for LSST and the physicists who are building it. Yet that’s only a start. LSST’s fire hose of publicly available data will allow astronomers the world over to view faint and rapidly changing objects, create 3D maps and time lapses of the night sky and detail Pluto’s celestial neighborhood, the Kuiper belt.

"Not only should LSST revolutionize our understanding of the universe, its contents and the laws that govern its behavior, but it will also transform the way all of us, from kindergarteners to professional astrophysicists, use telescopes,” said Tony Tyson, LSST director and a professor of physics at the University of California, Davis. “These are exciting times!"