Mathematician Ingrid Daubechies to Speak on 'Surfing with Wavelets' at Brookhaven Lab, June 7 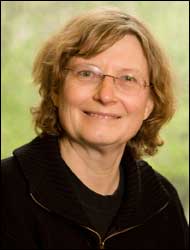 UPTON, NY — Ingrid Daubechies, a physicist and mathematician will give a talk entitled, “Surfing With Wavelets” at the U.S. Department of Energy's Brookhaven National Laboratory on Thursday, June 7, at 4 p.m. in Berkner Hall. Sponsored by Brookhaven Women in Science (BWIS) Brookhaven Science Associates, (the company that manages the Lab), the talk is free and open to the public. Visitors to the Laboratory age 16 or older must carry photo I.D.

Increasingly awash in data from satellite signals, weather maps, digital video, and complex medical imaging, modern understanding of signal transmission analysis and enhancement relies on Daubechies’ work with wavelets and image compression. Focusing on the mathematical aspects of time-frequency analysis and its applications, Daubechies is currently applying her methods and techniques to learning theory.

Elected the first woman president of the International Mathematical Union (2011–2014), Daubechies is currently the James B. Duke Professor of Mathematics at Duke University.

Daubechies grew up in Belgium and received her Bachelor and Ph.D. from the Free University in Brussels. Even as a young child, she was interested in mathematics and how things worked, and was encouraged by her father, a civil mining engineer, and her mother, a criminologist, to pursue her interest in science. Although she studied to become a physicist, her work has always been very mathematical. She held a research position at Free University, was a member of the technical staff at AT&T Bell Laboratories, fellow of the John D. and Catherine T. MacArthur Foundation, and William R. Kenan Jr. Professor in the mathematics and applied mathematics departments at Princeton University.

Daubechies has been very involved in helping communicate mathematics to the public, in particular, developing ideas for kindergarten through high school mathematics curriculum that reflect present-day applications of mathematics.

Recipient of numerous awards in recognition of her groundbreaking work, Daubechies received the Louis Empain Prize in Physics, awarded once every five years to a Belgian scientist on the basis of work done before the age of 29. In 1998, she was elected to the National Academy of Sciences and as a Fellow of the Institute of Electrical and Electronics Engineers. The American Mathematical Society awarded her a Leroy P. Steele prize for exposition in 1994 for her book, “Ten Lectures on Wavelets,” as well as the 1997 Ruth Lyttle Satter Prize for her "deep and beautiful analysis of wavelets and their applications." In 2000, Daubechies became the first woman to receive the National Academy of Sciences Award in Mathematics for excellence in published mathematical research. She is a member of the American Academy of Arts and Sciences, the American Mathematical Society, the Mathematical Association of America, the Society for Industrial and Applied Mathematics, and the Institute of Electrical and Electronics Engineers.