The following news release is being issued today by the U.S. Department of Energy's Fermi National Accelerator Laboratory.

Brookhaven National Lab scientists have played key roles in the MINOS experiment. Mary Bishai and Brett Viren developed the software to record important beam parameters such as the intensity of each neutrino pulse. Zeynep Isvan studied the difference between neutrinos and anti-neutrinos to find evidence of new physics. David Jaffe was involved in the earlier measurements of the anti-neutrino disappearance at MINOS and has led the analysis effort at the Daya Bay reactor neutrino experiment. Milind Diwan and Brett Viren developed the initial techniques used to search for evidence of key neutrino oscillation parameters in MINOS.

The techniques developed by the MINOS experiment are being used to develop the next generation of neutrino accelerator experiments such as the proposed Long Baseline Neutrino Experiment (LBNE), which could help determine the matter/ant-matter asymmetry in the universe.

This work builds upon a legacy of breakthrough neutrino research by Brookhaven Lab that has resulted in two Nobel Prizes in Physics. For more information about Brookhaven’s role, contact Justin Eure, jeure@bnl.gov, 631-344-2347, or Peter Genzer, genzer@bnl.gov, 631-344-3174. 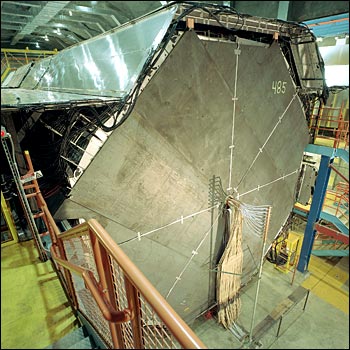 The MINOS far detector is located in a cavern half a mile underground in the Soudan Underground Laboratory, Minnesota. The 100-foot-long MINOS far detector consists of 486 massive octagonal planes, lined up like the slices of a loaf of bread. Each plane consists of a sheet of steel about 25 feet high and one inch thick, with the last one visible in the photo. The whole detector weighs 6,000 tons. Since March 2005, the far detector has recorded neutrinos from a beam produced at Fermilab. The MINOS collaboration records about 1,000 neutrinos per year. (Image courtesy of Fermilab)

Batavia, Illinois—Scientists from the MINOS experiment at the Department of Energy’s Fermi National Accelerator Laboratory have revealed the world’s most precise measurement of a key parameter that governs the transformation of one type of neutrino to another. The results confirm that neutrinos and their antimatter counterparts, antineutrinos, have similar masses as predicted by most commonly accepted theories that explain how the subatomic world works.

MINOS caused a jolt in the physics world in 2010 when it announced that a measurement of this parameter, called delta m squared, showed a surprisingly large difference between the masses of neutrinos and antineutrinos. A subsequent 2011 measurement with increased statistics appeared to bring the neutrino and antineutrino masses closer in sync. With twice as much antineutrino data collected since its 2011 result, scientists confirm that the gap has closed. This upholds predictions and provides crucial information for many other neutrino experiments around the globe.

“At the end of its initial seven-year run, MINOS has proven that it has been an incredibly successful long-baseline neutrino experiment,” said Fermilab’s Rob Plunkett, MINOS co-spokesperson. “We look forward to the next phase, when we will search for a new type of neutrino.”

To measure the transformation of one type of neutrino to another, the MINOS experiment sends a beam of muon neutrinos 450 miles (735 kilometers) through the earth from the Main Injector accelerator at Fermilab to a 5,000-ton neutrino detector located half a mile underground in the Soudan Underground Laboratory in northern Minnesota. The experiment uses two almost identical detectors: the detector at Fermilab is used to check the purity of the muon neutrino beam, and the detector at Soudan looks for electron and muon neutrinos. The neutrinos’ trip from Fermilab to Soudan takes about 2.5 milliseconds, giving the neutrinos enough time to change their identities.

With its full data set collected, MINOS recorded a total of 21 electron-neutrino-like events on top of a background of 79. This represents 40% more data than its 2011 measurement of this transformation. The larger data set allowed MINOS scientists to improve their measurement of a parameter that describes this transformation, called sin22θ13. The new measurement remains consistent with the experiment’s previous measurements and provides an important clue to understanding the puzzle of neutrinos – how they transform from one type to another, and which of the three neutrinos types is the most massive.

Because MINOS uses different types of neutrinos than those produced by nuclear reactors, and compared to the Japanese experiment T2K has its two detectors significantly further apart, its measurements of the transformation of muon to electron neutrinos are sensitive to different effects than other worldwide experiments. In particular, depending on how nature has chosen to order the neutrino masses, MINOS measurements of the parameter sin 22 q 13 could be different from those made by T2K.

“The results from MINOS have pushed the endeavor into the next phase: now we start to look for the mass ordering of neutrinos ,” said University College London Professor Jenny Thomas, co-spokesperson for the MINOS experiment. “Fermilab will lead this endeavor with its NOvA experiment that will start next year.”

In 2013 the upgraded Fermilab accelerator complex will send an even more intense and higher-energy beam of muon neutrinos to two experiments in Northern Minnesota: the brand-new NOvA experiment and the second phase of MINOS. In its next phase, MINOS will focus on the hunt for a fourth type of neutrino. Hints of a fourth type have been observed in two previous experiments.

The MINOS experiment involves more than 140 scientists, engineers, technical specialists and students from 30 institutions, including universities and national laboratories, in five countries: Brazil, Greece, Poland, the United Kingdom and the United States. Funding comes from: the U.S. Department of Energy’s Office of Science; the U.K.’s Science and Technology Facilities Council; the U.S. National Science Foundation; the University of Minnesota, which operates the Soudan Underground Laboratory; Brazil's Foundation for Research Support of the State of São Paulo (FAPESP) and National Council of Scientific and Technological Development (CNPq) and the University of Athens in Greece.

Fermilab is America’s premier national laboratory for particle physics research. A U.S. Department of Energy Office of Science laboratory, Fermilab is located near Chicago, Illinois and operated under contract by the Fermi Research Alliance, LLC. Visit Fermilab’s website at http://www.fnal.gov and follow us on Twitter at @FermilabToday.