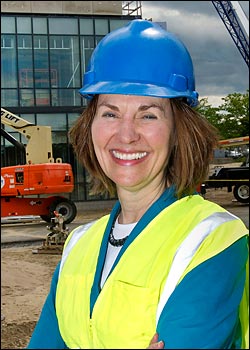 Esther Takeuchi, Brookhaven Lab’s new Chief Scientist for the Global and Regional Solutions directorate, visits the construction site of the Interdisciplinary Sciences Building, where she will lead efforts in advanced energy research.

UPTON, NY – The hunt for renewable energy sources sits at the heart of the United States Department of Energy’s (DOE) mission, part of a plan to improve national security, diminish adverse environmental impact, and raise people’s quality of life. Equally critical to the generation of power is the effective storage of it – what good is abundant electricity without batteries to supply it to everything from smart phones to pacemakers?

Esther Takeuchi, an electrochemist and one of the world’s leading energy storage researchers, is joining Brookhaven National Laboratory to advance projects that will move a vibrant, sustainable energy economy closer to reality. Takeuchi, who was awarded the 2009 National Medal of Technology by President Obama for her innovations in lithium battery technology and biomedical devices, will help lead Brookhaven Lab into the future as Chief Scientist for the Global and Regional Solutions Directorate.

“I hope to expand Brookhaven Lab’s focus on energy and energy storage related research,” Takeuchi said. “The Lab has top-flight scientists and instrumentation that will be outstanding to deploy on these issues.”

Takeuchi brings skills developed in extensive industrial technology innovation, and recently in academia. She comes to Brookhaven Lab from the State University of New York (SUNY) at Buffalo, where she taught chemical, biological, and electrical engineering beginning in 2007, becoming a SUNY Distinguished Professor in 2009. Takeuchi will continue her SUNY affiliation by joining the materials science and chemistry departments of Stony Brook University, coordinated as a joint appointment with Brookhaven Lab.

Before teaching, Takeuchi spent more than 20 years at Greatbatch, Inc., a company founded in 1970 by the co-inventor of the first implanted pacemaker. The Clarence, NY-based company is dedicated to advancing essential medical device technology. Greatbatch later funded Takeuchi’s professorship at Buffalo and provided a significant gift to help support her continued research into biomedical power sources.

“Greatbatch had a tremendous environment for innovation and for meeting the needs of a growing and dynamic field,” Takeuchi said. “I had the chance to apply my background in chemistry and electrochemistry to the opportunities at Greatbatch.” 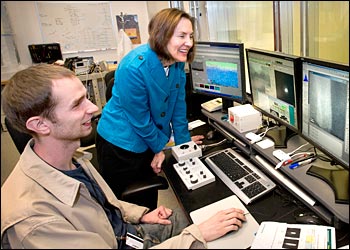 Takeuchi rose at Greatbatch from senior chemist to chief scientist, received more than 140 patents, and established herself as one of the country’s most prolific inventors. She is perhaps best known for developing compact lithium batteries for implantable defibrillators, which use electrical shocks to stop heart attacks and bring the heart back into normal rhythm, though her research extended into helping people live with many debilitating diseases.

“Batteries impact everyone’s lives,” Takeuchi said. “On a daily basis we all use commercially available batteries powering electronics such as cell phones, iPads, laptop computers and GPS devices. The search for better batteries can impact a diverse set of industries, such as aerospace, medicine, transportation and even the grid, where implementation of renewable and intermittent forms of energy generation depends on storage.”

Takeuchi has received numerous forms of recognition from her peers in the scientific community. Highlights from her 30 years of research include induction into the National Academy of Engineering in 2004, becoming a Fellow of the American Institute for Medical and Biological Engineering, multiple inventor of the year awards, and several recognitions for her singular impact as a woman in the sciences. A prolific inventor who been has been recognized as having more patents than any living woman, Takeuchi was inducted into the National Inventors Hall of Fame in 2011.

Takeuchi attributes much of her tenacity to the influence of her father, an electrical engineer who encouraged her to embrace math at a young age. She also noted that the right outlook can help motivate research. “Curiosity is a major driver in science, and it creates boundless enthusiasm for seeking and expanding the next horizon,” she said.

Gerald Stokes, Brookhaven’s Associate Laboratory Director for the Global and Regional Solutions (GARS) directorate, noted Takeuchi’s potential to advance Brookhaven Lab’s energy goals. “Esther has a proven record of moving fundamental scientific understanding not only to a successful place in the market, but to making a significant impact on society,” Stokes said. “She is a superb role model for the mission of GARS and for the lab community.”

Esther Takeuchi received her B.A. in chemistry and history from the University of Pennsylvania and her Ph.D. in organic chemistry from the Ohio State University. She went on to complete her postdoctoral work at the University of North Carolina at Chapel Hill and SUNY Buffalo, where she recently taught. She now moves into this new position at Brookhaven Lab, which offers unique opportunities to apply her energy expertise at facilities such as the Center for Functional Nanomaterials (CFN), the National Synchrotron Light Source (NSLS), and the forthcoming National Synchrotron Light Source II (NSLS-II).

“This new collaboration with Brookhaven is very exciting,” Takeuchi said. “I look forward to getting to know the scientists and possibilities here.”