Carbon is Key for Getting Algae to Pump Out More Oil 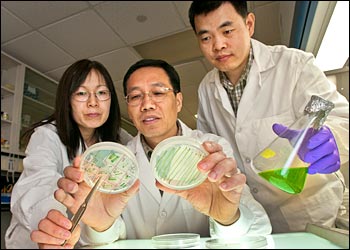 Brookhaven researchers Jilian Fan, Changcheng Xu, and Chengshi Yan with cultures of algae that were shown to increase oil production in response to excess carbon.

UPTON, N.Y. — Overturning two long-held misconceptions about oil production in algae, scientists at the U.S. Department of Energy’s Brookhaven National Laboratory show that ramping up the microbes’ overall metabolism by feeding them more carbon increases oil production as the organisms continue to grow. The findings — published online in the journal Plant and Cell Physiology on May 28, 2012 — may point to new ways to turn photosynthetic green algae into tiny “green factories” for producing raw materials for alternative fuels.

“We are interested in algae because they grow very quickly and can efficiently convert carbon dioxide into carbon-chain molecules like starch and oils,” said Brookhaven biologist Changcheng Xu, the paper’s lead author. With eight times the energy density of starch, algal oil in particular could be an ideal raw material for making biodiesel and other renewable fuels.

But there have been some problems turning microscopic algae into oil producing factories.

For one thing, when the tiny microbes take in carbon dioxide for photosynthesis, they preferentially convert the carbon into starch rather than oils. “Normally, algae produce very little oil,” Xu said.

Before the current research, the only way scientists knew to tip the balance in favor of oil production was to starve the algae of certain key nutrients, like nitrogen. Oil output would increase, but the algae would stop growing — not ideal conditions for continuous production.

Another issue was that scientists didn’t know much about the details of oil biochemistry in algae. “Much of what we thought we knew was inferred from studies performed on higher plants,” said Brookhaven biochemist John Shanklin, a co-author who’s conducted extensive research on plant oil production. Recent studies have hinted at big differences between the microbial algae and their more complex photosynthetic relatives. 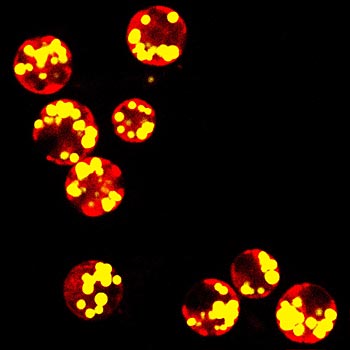 The scientists grew cultures of Chlamydomonas reinhardtii — the “fruit fly” of algae — under a variety of nutrient conditions, with and without inhibitors that would limit specific biochemical pathways. They also studied a mutant Chlamydomonas that lacks the capacity to make starch. By comparing how much oil accumulated over time in the two strains across the various conditions, they were able to learn why carbon preferentially partitions into starch rather than oil, and how to affect the process.

The main finding was that feeding the algae more carbon (in the form of acetate) quickly maxed out the production of starch to the point that any additional carbon was channeled into high-gear oil production. And, most significantly, under the excess carbon condition and without nutrient deprivation, the microbes kept growing while producing oil.

The detailed studies, conducted mainly by Brookhaven research associates Jilian Fan and Chengshi Yan, showed that the amount of carbon was the key factor determining how much oil was produced: more carbon resulted in more oil; less carbon limited production. This was another surprise because a lot of approaches for increasing oil production have focused on the role of enzymes involved in producing fatty acids and oils. In this study, inhibiting enzyme production had little effect on oil output.

“This is an example of a substantial difference between algae and higher plants,” said Shanklin.

This is not all that different from what we see in human metabolism, Xu points out: Eating more carbon-rich carbohydrates pushes our metabolism to increase oil (fat) production and storage.

“It’s kind of surprising that, in some ways, we’re more like algae than higher plants are,” Xu said, noting that scientists in other fields may be interested in the details of metabolic switching uncovered by this research.

But the next step for the Brookhaven team will be to look more closely at the differences in carbon partitioning in algae and plants. This part of the work will be led by co-author Jorg Schwender, an expert in metabolic flux studies. The team will also work to translate what they’ve learned in a model algal species into information that can help increase the yield of commercial algal strains for the production of raw materials for biofuels.