As electricity travels from power plants and into homes, a large amount of the initial energy dissipates as heat along the way. This inefficiency comes from a resistance to current inherent to the metallic cables used to deliver the electricity. High-temperature superconductors, however, manage to transmit energy without loss, providing a potential conduit for efficient and inexpensive power distribution all over the globe. Unfortunately, the mechanism underlying these remarkable materials remains unknown, hampering the development of more advanced materials to provide that loss-free flow of electricity.

“For the first time, we can study truly two-dimensional behavior without the complicated interactions found on larger materials,” said Brookhaven physicist Mark Dean. “It’s widely believed that the essential electron pairing in high-temperature superconductors is magnetically mediated. Examining the fundamental building blocks of these superconductors, layers of copper and oxygen atoms, is key to understanding that magnetism and one day designing superconductors with even better properties.” 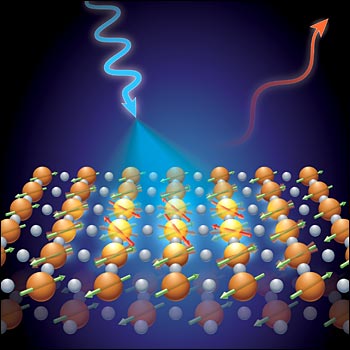 In this breakthrough technique, intense x-rays deposit energy into the magnetic spin waves of atomically thin layers of high-temperature superconductors. The difference in x-ray energy before and after interaction reveals key information about the fundamental behavior of these exciting and mysterious materials.

Traditional superconductors, discovered more than a century ago, have been well explained by theory for decades. But despite that fundamental understanding, these remarkable materials still face a significant obstacle to effective implementation: the lossless behavior only occurs at temperatures close to absolute zero, almost as cold as the vacuum of outer space. The considerable power consumed cooling down superconducting cables offsets the benefit of their perfect current conveyance.

High-temperature superconductors, meanwhile, are perhaps mislabeled, as even these poorly understood materials must be cooled down to the inconvenient temperature of liquid nitrogen, some 350 degrees Fahrenheit below zero. But unlike traditional superconductors, the underlying physics behind their properties remains unknown, giving hope that they might be manipulated and adapted for broad use

“The dream is that if you could pin down the fundamental source of high-temperature superconductivity, you could make them work at room temperature,” said Brookhaven Lab physicist John Hill. “Quantum spin may be a key part of the story.”

Magnetism is the direct result of electron spin, which can be imagined as a distinct directional arrow attached to each particle. In magnetic materials, when all of these individual arrows point in the same direction they produce the cumulative effect of a magnetic field – e.g, the north/south orientation of magnets.

Down on the nanometer scale, at billionths of a meter, electron spins rapidly communicate with each other. When a spin flips inside a magnet, this disturbance can propagate through the material as a wave, tipping the neighboring spins in its path. Some researchers believe that this coherent spin wave, called a magnon, may be what binds electrons together to create high-temperature superconductivity. The magnetic wave conversations are particularly strong in these materials, suggesting their role in that crucial conductivity.

"Probing spin waves in atomically thin layers has long seemed impossible, because of the very small signal from so few atoms,” said Dean. “However, now, using very intense, tunable, x-ray beams it is possible for the first time to probe magnetic excitations in a two-dimensional copper oxide layer.” 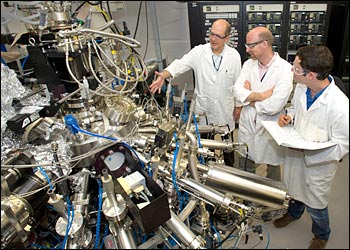 Brookhaven Lab’s Ivan Bozovic specializes in designing and fabricating nanoscale superconducting materials using a custom-built molecular-beam epitaxy (MBE) machine. Bozovic is uniquely equipped to monitor the synthesis of the superconductors in real-time, giving him an unparalleled degree of control and quality.

“The ability to grow these near-flawless 100-nanometer films atomic layer by atomic layer exactly as requested was crucial to the success of this experiment,” Hill said. “And that’s something that Ivan [Bozovic] is the world’s best at. We couldn’t have done that work anywhere but Brookhaven.”

Bozovic grew samples that consisted of two-dimensional layers of lanthanum copper oxide (La2CuO4) stacked and separated by insulators to prevent interference between layers. The x-ray experiments only reacted with the copper atoms in the sample, making the insulator scaffolding effectively invisible and isolating the superconductor layers to precisely probe for spin wave behavior.

Dean and Hill worked alongside collaborators led by Thorsten Schmitt at the Paul Scherrer Institute, which hosts one of the world’s most sensitive instruments for resonant inelastic x-ray scattering. Using this machine, called the Super Advanced X-ray Emission Spectrometer (SAXES), the researchers examined subtle quantum spin excitations at lower energy levels than ever before.

“We measured the x-rays very precisely just before they struck the sample, and then again after they had scattered out,” Hill said. “The difference in energies indicated the energy transferred to these magnetic spins to create a spin wave. We’re getting our first good look at these telltale spin waves in a two-dimensional layer, right at the source of magnetism.”

The full story behind high-temperature superconductivity remains uncertain, but this technique revealed that these quantum spins behave very similarly to classical magnets. The researchers, along with collaborators at University College London, UK, the Leibniz-Institut für Festkörper in Dresden, Germany, and Ecole Polytechnique Fédérale de Lausanne, Switzerland, also found that certain predicted quantum effects were not present in the two dimensional samples.

“This demonstrates that classical spin waves can survive in atomically thin copper-oxide layers,” Dean said. “Theory will now have to catch up and help explain these results. Also, the success of this technique opens exciting new experimental pathways that may help to reveal the origin of high-temperature superconductivity.”

The research was funded through Brookhaven Lab’s Center for Emergent Superconductivity, an Energy Frontier Research Center funded by the U.S. Department of Energy’s Office of Science to seek understanding of the underlying nature of superconductivity in complex materials.