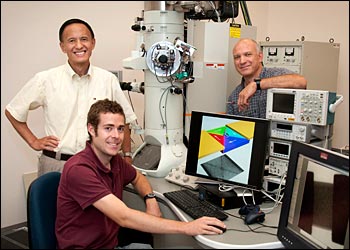 UPTON, NY — The evolution of digital electronics is a story of miniaturization – each generation of circuitry requires less space and energy to perform the same tasks. But even as high-speed processors move into handheld smart phones, current data storage technology has a functional limit: magnetically stored digital information becomes unstable when too tightly packed. The answer to maintaining the breath-taking pace of our ongoing computer revolution may be the denser, faster, and smarter technology of spintronics.

Spintronic devices use electron spin, a subtle quantum characteristic, to write and read information. But to mobilize this emerging technology, scientists must understand exactly how to manipulate spin as a reliable carrier of computer code. Now, scientists at the Department of Energy’s (DOE) Brookhaven National Laboratory have precisely measured a key parameter of electron interactions called non-adiabatic spin torque that is essential to the future development of spintronic devices. Not only does this unprecedented precision – the findings to be published in the journal Nature Communications on August 28 – guide the reading and writing of digital information, but it defines the upper limit on processing speed that may underlie a spintronic revolution.

“In the past, no one was able to measure the spin torque accurately enough for detailed comparisons of experiment and mathematical models,” said Brookhaven Lab physicist Yimei Zhu. “By precisely imaging the spin orbits with a dedicated transmission electron microscope at Brookhaven, we advanced a truly fundamental understanding that has immediate implications for electronic devices. So this is quite exciting.”

Most prevailing technology fails to take full advantage of the electron, which features intrinsic quantum variables beyond the charge and flow driving electricity. One of these, a parameter known as spin direction, can be strategically manipulated to function as a high-density medium to store and transmit information in spintronics. But as any computer scientist can attest, dense data can mean very little without enough speed to process it efficiently.

“One of the big reasons that people want to understand this non-adiabatic spin torque term, which describes the ability to transfer spin via electrical currents, is that it basically determines how fast spintronic devices can be,” said Shawn Pollard, a physics Ph.D. student at Brookhaven Lab and Stony Brook University and the lead author of the paper. “The read and write speed for data is dictated by the size of this number we measured, called beta, which is actually very, very big. That means the technology is potentially very, very fast.”

Consider the behavior of coffee stirred rapidly in a mug: the motion of a spoon causes the liquid to spin, rising along the edges and spiraling low in the center. Because the coffee can’t escape through the mug’s porcelain walls, the trapped energy generates the cone-like vortex in the center. A similar phenomenon can be produced on magnetic materials to reveal fundamental quantum measurements. 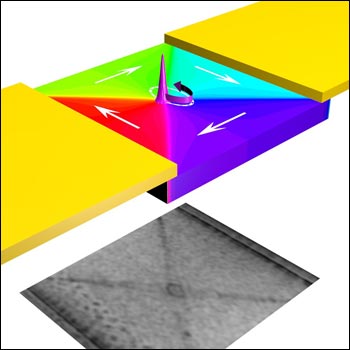 This color graphic, seen here above an actual image of the vortex core captured by the transmission electron microscope, shows the trapped spins moving around the permalloy sample, which then generate the conical vortex core rising out of the center.

The Brookhaven physicists applied a range of high-frequency electric currents to a patterned film called permalloy, useful for its high magnetic permeability. This material, 50 nanometers (billionths of a meter) thick and composed of nickel and iron, was designed to strictly contain any generated magnetic field. Unable to escape, trapped electron spins combine and spiral within the permalloy, building into an observable and testable phenomenon called a magnetic vortex core.

“The vortex core motion is actually the cumulative effect of three distinct energies: the magnetic field induced by the current, and the adiabatic and non-adiabatic spin torques generated by electrons,” Zhu said. “By capturing images of this micrometer (millionth of a meter) effect, we can deduce the precise value of the non-adiabatic torque’s contribution to the vortex, which plays out on the nanoscale. Other measurements had very high error, but our technique offered the spatial resolution necessary to move past the wide range of previous results.”

The high-speed, high-density hard drives in today’s computers write information into spinning disks of magnetic materials, using electricity to toggle between magnetic polarity states that correspond to the “1” or “0” of binary computer code. But a number of intrinsic problems emerge with this method of data storage, notably limits to speed because of the spinning disk, which is made less reliable by moving parts, significant heat generation, and the considerable energy needed to write and read information.

Beyond that, magnetic storage suffers from a profound scaling issue. The magnetic fields in these devices exert influence on surrounding space, a so-called fringing field. Without appropriate space between magnetic data bits, this field can corrupt neighboring bits of digital information by inadvertently flipping “1” into “0.” This translates to an ultimate limit on scalability, as these data bits need too much room to allow endless increases in data density.

One pioneering spintronic prototype is IBM’s Racetrack memory, which uses spin-coherent electric current to move magnetic domains, or discrete data bits, along a permalloy wire about 200 nanometers across and 100 nanometers thick. The spin of these magnetic domains is altered as they pass over a read/write head, forming new data patterns that travel back and forth along the nanowire racetrack. This process not only yields the prized stability of flash memory devices, but also offers speed and capacity exceeding disk drives.

“It takes less energy to manipulate spin torque parameters than magnetic fields,” said Pollard. “There’s less crosstalk between databits, and less heat is generated as information is written and read in spin-based storage devices. We measured a major component critical to unlocking the potential of spintronic technology, and I hope our work offers deeper insight into the fundamental origin of this non-adiabatic term.”

The new measurement pins down a fundamental limit on data manipulation speeds, but the task of translating this work into practical limits on processor speed and hard drive space will fall to the scientists and engineers building the next generation of digital devices.

Zhu and Pollard collaborated with two physicists specializing in nanomagnetism, Kristen Buchanan of Colorado State University and Dario Arena of Brookhaven’s National Synchrotron Light Source (NSLS), to push the precision capabilities of the transmission electron microscope. This research was conducted at Brookhaven Lab’s Department of Condensed Matter Physics and Materials Science, and funded by the U.S. Department of Energy’s Office of Science.