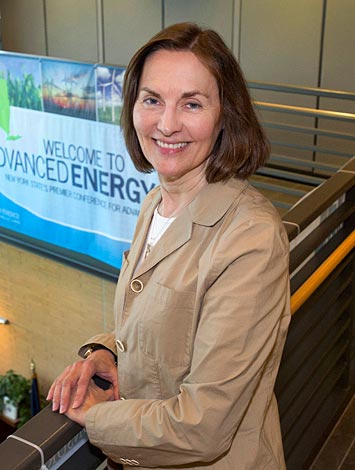 STONY BROOK and UPTON, NY – Esther Takeuchi, a SUNY Distinguished Professor with a joint appointment in the Department of Chemistry and the Department of Materials Science and Engineering at Stony Brook University, and the Chief Scientist for the U.S. Department of Energy’s Brookhaven National Laboratory's Global and Regional Solutions Directorate, has been selected as a Fellow of the Electrochemical Society (ECS). The ECS, a prestigious professional organization concerned with various phenomena related to electrochemical and solid-state science and technology, boasts membership of more than 8,000 scientists and engineers worldwide, with no more than three percent honored with the distinction of Fellow.

Takeuchi, one of the world’s leading experts in the multidisciplinary field of energy storage technology, was honored at the 222nd Biannual ECS meeting held in October in Honolulu, Hawaii. She was cited for “the development of the silver vanadium oxide battery and innovations in other medical battery technologies that improve the health of millions of people.” The honor references Takeuchi’s breakthrough invention of compact lithium batteries found in implantable cardiac defibrillators, which use electrical shocks to correct dangerous arrhythmia and bring the heart back into normal rhythm.

“I am very gratified to be selected as a Fellow of the Electrochemical Society,” Takeuchi said. “The society is more than 100 years old and is the largest in the world focusing on electrochemistry. This recognition is a great affirmation by my peers in the field.” Among many other accolades, she is a 2011 inductee of the National Inventors Hall of Fame who holds more than 150 patents, making her one of the country’s most prolific inventors. She also served as ECS President from 2011-2012.

“I congratulate Esther on this outstanding achievement,” said Dennis N. Assanis, Provost and Senior Vice President for Academic Affairs at Stony Brook University and Vice President for Brookhaven National Laboratory Affairs. “To be selected as a Fellow of the world’s largest and oldest electrochemical, solid-state science and technology organization, an honor that only goes to a select few, illustrates the quality of the groundbreaking and translational research that she performs on a daily basis at Stony Brook.”

Takeuchi, who joined Stony Brook University earlier this year, shares her duties as Professor with a key leadership role at Brookhaven Lab, addressing some of the nation’s most pressing energy challenges through innovative work at facilities including the Center for Functional Nanomaterials and the forthcoming Interdisciplinary Sciences Building.

“We’re thrilled to see Esther receive this recognition from her peers for her remarkable contributions to electrochemistry and battery research,” said Gerald Stokes, Brookhaven’s Associate Laboratory Director for the Global and Regional Solutions Directorate. “She strengthens the Lab’s energy research program significantly, and we couldn’t ask for a more experienced and visionary leader.”

In 2009, President Obama presented Takeuchi with the National Medal of Technology and Innovation, the highest honor possible for technological achievement in the United States. She has also been inducted into the prestigious National Academy of Engineering and selected as a Fellow of the American Institute for Medical and Biological Engineering. Takeuchi was recently selected as the 2013 recipient of the E.V. Murphree Award in Industrial and Engineering Chemistry from the American Chemical Society.

Takeuchi received her BA in chemistry and history from the University of Pennsylvania and her PhD in organic chemistry from Ohio State University. She completed her postdoctoral work at the University of North Carolina, Chapel Hill, and the University at Buffalo, where she also taught before joining Stony Brook University and Brookhaven Lab. Before teaching, Takeuchi spent more than 20 years at Greatbatch, Inc., which was founded by the co-inventor of the first implantable pacemaker. Her roles there included research scientist, chief scientist and Executive Director of Battery Research and Development.