The Sloan Digital Sky Survey III issued the following release on Nov. 13. Scientists at the U.S. Department of Energy’s Brookhaven National Laboratory work on an SDSS-III project called the Baryon Oscillation Spectroscopic Survey (BOSS) to create the largest ever 3-D map of the early universe.

The Great Space Coaster: Astronomers Measure the Deceleration of the Universe before Dark Energy 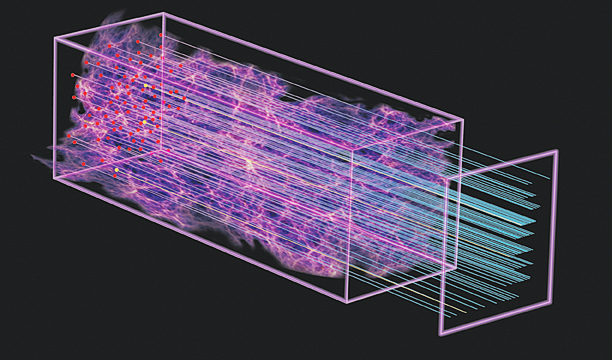 An illustration showing how SDSS-III was able to measure the distant Universe.

Light rays from distant quasars (dots at left) are partially absorbed as they pass through clouds of intergalactic hydrogen gas (center). When the light arrives at the spectrograph of the Sloan Foundation 2.5-Meter Telescope (square at right), some has been absorbed, leaving behind a record in the form of a "forest" of small absorption lines in the observed spectrum.

These lines can be interpreted to make a map of the gas along the line of sight between us and the quasar. By examining light from thousands of quasars all over the sky, astronomers can make a detailed three-dimensional map of the distant universe.

In this illustration, the dots at the far left are quasars, and the thin lines show light rays that left those quasars more than 10 billion years ago. Yellow dots are quasars that had been measured by prior projects of the Sloan Digital Sky Survey. By measuring the spectra from ten times as many quasars in this range (red dots), BOSS can reveal the large-scale structure of the early universe in much greater detail.

For the past five billion years, the expansion of the Universe has been speeding up, powered by the mysterious repulsive force known as "dark energy." But thanks to a new technique for measuring the three-dimensional structure of the distant Universe, astronomers from the Sloan Digital Sky Survey (SDSS-III) have made the first measurement of the cosmic expansion rate just three billion years after the Big Bang.

"If we think of the Universe as a roller coaster, then today we are rushing downhill, gaining speed as we go," says Nicolas Busca of the Laboratoire Astroparticule et Cosmologie of the French Centre National de la Recherche Scientifique (CNRS), one of the lead authors of the study. "Our new measurement tells us about the time when the Universe was climbing the hill — still being slowed by gravity."

The results were presented in a paper submitted to the journal Astronomy & Astrophysics; the paper was also posted today on the arXiv.org preprint site. The new measurement is based on data from the Baryon Oscillation Spectroscopic Survey (BOSS), one of the four surveys that make up SDSS-III. It utilizes a technique pioneered by the SDSS in 2005 called "baryon acoustic oscillations (BAO)." The BAO technique uses small variations in matter left over from the early Universe as a "standard ruler" to compare the size of the Universe at various points in its history.

But using that ruler comes with its own difficulties. "If we want to make a measurement at early times, then we need to map structure that is very far away," says Jim Rich of Centre de Saclay Institute of Research into the Fundamental Laws of the Universe (IRFU), another member of the analysis team. "If we used galaxies, it would be very hard, because galaxies that are far away are also very faint. So we have to try something else."

The new measurement does not look at galaxies at all. Instead, it makes use of the clustering of intergalactic hydrogen gas in the distant Universe. We can see this gas because it absorbs some light from quasars lying behind. When we measure the spectrum of a quasar, we see not only the light emitted by the quasar, but also what happened to that light in its long journey to Earth. When we look at a quasar's spectrum, we can see how the intervening gas absorbs some of the quasar's light. Measuring this absorption — a phenomenon known as the Lyman-alpha Forest — yields a detailed picture of the gas between us and the quasar.

"It's a cool technique, because we're essentially measuring the shadows cast by gas along a single line billions of light-years long," says Anže Slosar of Brookhaven National Laboratory. "The tricky part is combining all those one-dimensional maps into a three-dimensional map. It's like trying to see a picture that's been painted on the quills of a porcupine."

Last year, Slosar and his colleagues used the first 10,000 quasars from SDSS-III's Baryon Oscillation Spectroscopic Survey (BOSS) to make the first large-scale map of the structure of the faraway "Lyman-alpha forest" gas. As enormous as that map was, it was still not large enough to detect the subtle variations of BAOs. But the new map is big enough — it measures the Lyman-alpha forest using light from 50,000 quasars all over the sky.

When SDSS-III researchers began to study this bigger map more than a year ago, they didn't know whether or not this technique would work. "When we started, we didn't want to bias ourselves into seeing what we wanted to see," says team member Timothee Delubac of Centre de Saclay IRFU. "We only looked at scales where we didn't expect to see BAOs. But as we moved in on the right scale, we had a very exciting moment. The BAO peak was sitting there in our plot, right where it would be if dark energy were a constant property of space itself."

The team's new measurement of the BAO peak, combined with measurements of the same peak at other points in the Universe's history, paints a picture of how the Universe has evolved over its history. The picture that emerges is consistent with our current understanding of the Universe — that dark energy is a constant part of space throughout the cosmos.

What is fascinating about the new result is that, for the first time, we see how dark energy worked at a time before the Universe's current acceleration started."Our goal for BOSS was to measure the expansion of the Universe. We planned to make that measurement in two ways — one a sure thing and one a risky new idea," says University of Utah astrophysicist Kyle Dawson, the BOSS survey scientist who ensures that good data is taken for each of the 1.8 million galaxies and quasars that BOSS will observe during the 6 years of SDSS-III. "It's really exciting that, thanks to the dedicated work of so many people, we know that both methods work. We have shown that the Lyman-alpha forest can accurately measure the expansion of the Universe when it was only one-fifth its current age." 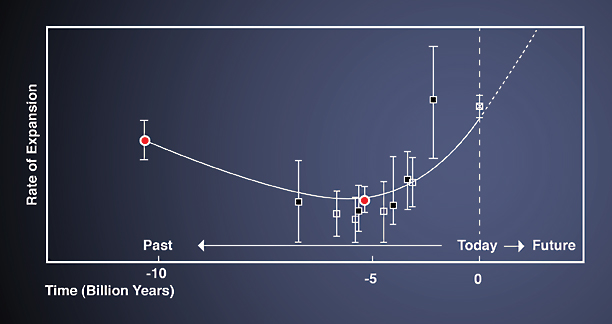 A graph showing how the Universe's expansion rate has changed over the last ten billion years.

Until recently, three-dimensional maps by BOSS and other surveys were able to measure the regular distribution of galaxies back to only about five and a half billion years ago, a time when the expansion of the Universe was already accelerating.

The numbers along the bottom of the graph show the time in the Universe's past, in billions of years. The vertical scale (y-axis) shows the expansion rate of the Universe; higher means the Universe was expanding faster. These older measurements appear as data points toward the right of the graph.

The new SDSS-III measurements, shown as the data point to the far left, have now probed the structure of the early Universe at a time when expansion was still slowing down.

"No technique has ever been able to probe this ancient era before," says BOSS principal investigator David Schlegel of the Lawrence Berkeley National Laboratory. "Back then, the expansion of the Universe was slowing down; today, it's speeding up. How dark energy caused the transition from deceleration to acceleration is one of the most challenging questions in cosmology."

SDSS-III will continue to learn more about dark energy as it collects more than a million and half galaxies and more than 160,000 quasars by the end of the survey. By the time SDSS-III is complete, it will have helped transform the Lyman-alpha forest technique from a risky idea into a standard method by which astronomers explore the nature of the faraway Universe.

Nicolas Busca summarizes: "It looks like the roller coaster crested the hill just about seven billion years ago, and we're still going."

Funding for SDSS-III has been provided by the Alfred P. Sloan Foundation, the Participating Institutions, the National Science Foundation, and the U.S. Department of Energy Office of Science. The SDSS-III web site is http://www.sdss3.org/.