UPTON, NY—Scientists at the U.S. Department of Energy’s (DOE) Brookhaven National Laboratory have established a link between choice of drug-related images compared to other categories and drug use over the six months following the test. The research, published online in Drug and Alcohol Dependence on December 6, 2012, may ultimately help identify which individuals might be especially prone to relapse in drug addition.

This research is seen as a next step in a series of Brookhaven Lab addiction studies on how drugs affect the brain and behavior, conducted by the Neuropsychoimaging group led by Rita Z. Goldstein. The team focuses on gaining a better understanding of brain and behavioral abnormalities in drug addiction and laying the groundwork for future rehabilitation efforts. Prior studies from Goldstein’s team have used functional magnetic resonance imaging (fMRI) and electroencephalography (EEG) to highlight distinct parts of the brain that may increase the tendency to relapse in drug-addicted individuals, among other addiction-related behaviors.

The primary focus of this recent study was to address the inevitable gap in addiction research that arises from not being able to study the effects of drugs while addicted individuals are in the process of receiving treatment, because allowing them the choice to actively take drugs would be unethical. 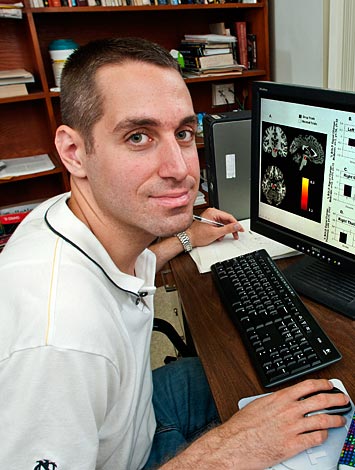 “Our drug-related choice—of pictures, rather than of actual cocaine—is a new paradigm in addiction research that aims to fill this gap,” said Scott Moeller, a post-doctoral fellow in Goldstein’s group and lead author of the study. “In order to be sure of these tasks’ validity, however, it is necessary to show that this drug-related choice predicts clinically meaningful outcomes over time.”

Research subjects completed a choice task to assess their preference for viewing images that were pleasant (such as babies or tropical beaches), unpleasant (such as bloodied faces or plane crashes), neutral (such as household objects), or drug-related (such as people using cocaine). The team then followed the subjects’ drug use over the next six months with monthly phone calls and a comprehensive drug history completed at the 6-month mark.

“We wanted to show that drug-related choice, measured at baseline, predicts actual drug use over the next six months in cocaine-addicted individuals seeking treatment. This is exactly what we found,” Moeller said. Participants who showed a strong preference for viewing cocaine images over pleasant images exhibited the most frequent drug use in the next six months.

With the establishment of drug-related choice as an outcome measure that holds significance in clinical settings, the next step is to further develop these choice tasks to predict other important endpoints.

“One new direction will be to assess the ability of addicted individuals to resist choosing cocaine-related images. The ability to inhibit responding to cocaine images could model the ability to control drug-relevant behavior outside the laboratory, and might therefore have implications for intervention down the road,” Moeller said. Another step forward will be studying what brain regions underlie such drug-related choice.