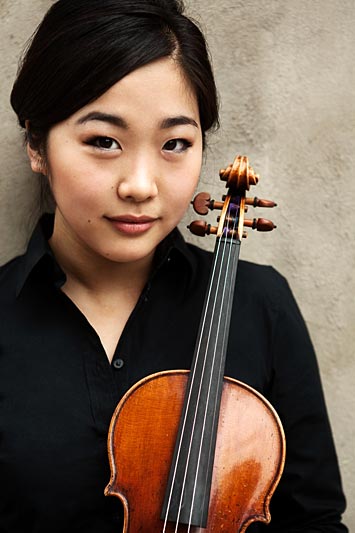 UPTON , NY - Violinist Kristin Lee, praised by The Strad for her "rare stylistic aptness" and "mastery of tone" will perform in a concert at  the U.S. Department of Energy's Brookhaven National Laboratory on Wednesday, March 6, at noon in Berkner Hall. Sponsored by Brookhaven Science Associates, the concert is free and open to the public. All visitors to the Laboratory 16 and older must bring a photo I.D.

Lee, the winner of 2010 Astral Artists Auditions and 2012 Walter W. Naumburg Competition, has appeared as a soloist with many ensembles, including the St. Louis, New Jersey, and New Mexico Symphonies, the Rochester Philharmonic, the Ural Philharmonic of Russia, and the Korean Broadcasting Symphony of Korea. She has appeared on the world's finest concert stages, including Carnegie Hall, Avery Fisher Hall, the Kennedy Center, Kimmel Center, the Metropolitan Museum, Steinway Hall's Salon de Virtuosi, and the Louvre Museum in Paris. Upcoming engagements include tours of the United States and Korea with The Chamber Music Society of Lincoln Center. Lee is also curating a solo recital at New York's Le Poisson Rouge for the spring of 2014 in which she is commissioning composer/performers to write music for the violin and steelpan, guitar, theremin, and carnatic South Indian singing.

Since her April 2011 performance at the Philadelphia International Festival of the Arts with DJ and drummer Questlove, titled "Paris-Philly Lockdown," Lee has enjoyed a continued collaboration with this frontman for the Grammy Award-winning band The Roots.  Lee's program at Brookhaven Lab includes works by Kreisler, Debussy and Ravel, and selections from Gershwin's Porgy and Bess.