The following news release describing a study of differences in the brain's response to sugar between insulin-resistant and insulin-sensitive people was issued by the Society of Nuclear Medicine and Molecular Imaging (SNMMI) in conjunction with a talk on this topic at the society's annual meeting on Monday, June 10, 2013. The study was conducted at the U.S. Department of Energy's Brookhaven National Laboratory and supported by the National Institutes of Health (under grant numbers DK064087-09 and Z01AA000550) and Brookhaven Lab.  The PET Radiotracer Imaging technology used in the study was developed with the support of the DOE Office of Science. SNMMI Media Contact: Susan Martonik, (703) 652-6773, smartonik@snmmi.org 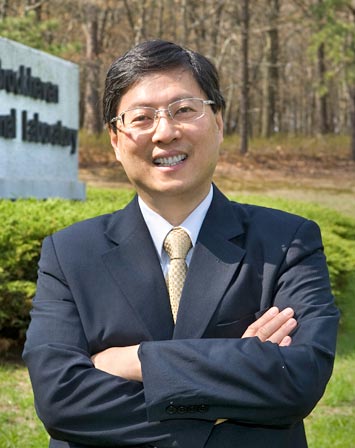 Vancouver, British Columbia (June 10, 2013) – Using positron emission tomography (PET) imaging of the brain, researchers have identified a sweet spot that operates in a disorderly way when simple sugars are introduced to people with insulin resistance, a precursor to type 2 diabetes. For those who have the metabolic syndrome, a sugar drink resulted in a lower-than-normal release of the chemical dopamine in a major pleasure center of the brain. This chemical response may be indicative of a deficient reward system, which could potentially be setting the stage for insulin resistance. This research could revolutionize the medical community's understanding of how food-reward signaling contributes to obesity, according to a study being presented at the Society of Nuclear Medicine and Molecular Imaging's 2013 Annual Meeting.

"Insulin resistance is a significant contributor to obesity and diabetes," said Gene-Jack Wang, MD, lead author of the study and professor of radiology at Stony Brook University and researcher at the U.S. Department of Energy's Brookhaven National Laboratory in Upton, N.Y. "A better understanding of the cerebral mechanisms underlying abnormal eating behaviors with insulin resistance would help in the development of interventions to counteract the deterioration caused by overeating and subsequent obesity. We suggest that insulin resistance and its association with less dopamine release in a central brain reward region might promote overeating to compensate for this deficit."

" … an abnormal dopamine response to glucose ingestion … may be the link we have been looking for between insulin resistance and obesity."

An estimated one-third of Americans are obese, according to the U.S. Centers for Disease Control and Prevention. The American Diabetes Association estimates that about 26 million Americans are living with diabetes and another 79 million are thought to be prediabetic, including those with insulin resistance.

The tendency to overeat may be caused by a complex biochemical relationship, as evidenced by preliminary research with rodents. Dr. Wang's research marks the first clinical study of its kind with human subjects.

He continued, "In this study we were able to confirm an abnormal dopamine response to glucose ingestion in the nucleus accumbens, where much of the brain's reward circuitry is located. This may be the link we have been looking for between insulin resistance and obesity. To test this, we gave a glucose drink to an insulin-sensitive control group and an insulin-resistant group of individuals and we compared the release of dopamine in the brain reward center using PET." 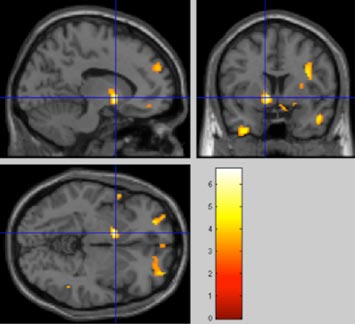 In this study, a total of 19 participants—including 11 healthy controls and eight insulin-resistant subjects—consumed a glucose drink and, on a separate day, an artificially sweetened drink containing sucralose. After each drink, PET imaging with C-11 raclopride—which binds to dopamine receptors—was performed. Researchers mapped lit-up areas of the brain and then gauged striatal dopamine receptor availability (which is inversely related to the amount of natural dopamine present in the brain). These results were matched with an evaluation in which patients were asked to document their eating behavior to assess any abnormal patterns in their day-to-day lives. Results showed agreement in receptor availability between insulin-resistant and healthy controls after ingestion of sucralose. However, after patients drank the sugary glucose, those who were insulin-resistant and had signs of disorderly eating were found to have remarkably lower natural dopamine release in response to glucose ingestion when compared with the insulin-sensitive control subjects.

"This study could help develop interventions, i.e., medication and lifestyle modification, for early-stage insulin-resistant subjects to counteract the deterioration that leads to obesity and/or diabetes," said Wang. "The findings set a path for future clinical studies using molecular imaging methods to assess the link of peripheral hormones with brain neurotransmitter systems and their association with eating behaviors."

About the Society of Nuclear Medicine and Molecular Imaging

The Society of Nuclear Medicine and Molecular Imaging (SNMMI) is an international scientific and medical organization dedicated to raising public awareness about nuclear medicine and molecular imaging, a vital element of today's medical practice that adds an additional dimension to diagnosis, changing the way common and devastating diseases are understood and treated and helping provide patients with the best health care possible.