The following press release is being issued today by the U.S. LHC Accelerator Program and its affiliated institutions. Brookhaven Lab's Superconducting Magnet Division played key roles in developing the magnets, including the high-temperature reaction and impregnation with epoxy resin and quality checks on the superconductor and completed coils. For more information on Brookhaven's role in this collaboration, please contact Justin Eure, jeure@bnl.gov. 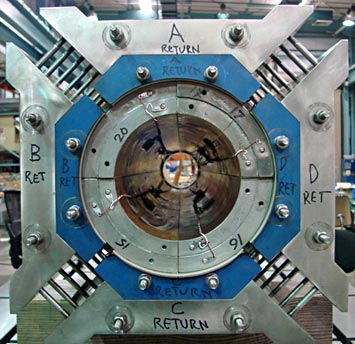 HQ02a is a superconducting quadrupole magnet made from modern niobium tin that will play a key role in developing a new beam focusing system for CERN's Large Hadron Collider. (Photo by Helene Felice, Berkeley Lab)

The U.S. LHC Accelerator Program (LARP) has successfully tested a powerful superconducting quadrupole magnet that will play a key role in developing a new beam focusing system for CERN's Large Hadron Collider (LHC). This advanced system, together with other major upgrades to be implemented over the next decade, will allow the LHC to produce 10 times more high-energy collisions than it was originally designed for.

Dubbed HQ02a, the latest in LARP's series of High-Field Quadrupole magnets is wound with cables of the brittle but high-performance superconductor niobium tin (Nb3Sn). Compared to the final-focus quadrupoles presently in place at the LHC, which are made with niobium titanium, HQ02a has a larger aperture and superconducting coils designed to operate at a higher magnetic field. In a recent test at the Fermi National Accelerator Laboratory (Fermilab), HQ02a achieved all its challenging objectives.

"Congratulation to all the LARP team for this brilliant result," said Lucio Rossi, leader of the High Luminosity LHC project at CERN. "The steady progress by LARP and the other DOE supported programs clearly shows the benefits of long-term investments to make serious advances in accelerator technology."

"In the context of the LARP magnet program, this marks the end of the R&D phase and the beginning of the focused development of the magnets that will be installed for the LHC luminosity upgrade", said Eric Prebys of Fermilab who has served as director of LARP for the last five years. "However, the implications go well beyond that, in that it establishes modern niobium tin as a powerful superconductor for use in accelerator magnets.  This success is a tribute to the skill, hard work, and collaborative spirit of all of the people involved."

Toward future physics at the LHC 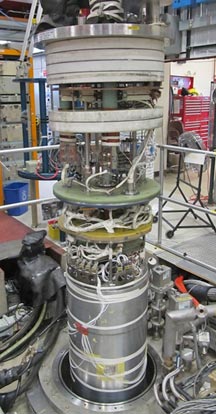 Last year's discovery of the Higgs boson fulfilled one of the major goals of the LHC, arguably the most powerful and complex scientific instrument ever built. Yet precision measurements of the Higgs are still to be made, as well as explorations of new physics including supersymmetry, dark matter, extra dimensions, and other wonders. The LHC's present complement of Interaction Region Quadrupole magnets, which focus the beams toward the collision points inside the experiments, will reach performance limits well below what's required for this ambitious physics program. One of the primary goals of LARP is to support CERN's plan to replace these focusing magnets in about 10 years as part of the High Luminosity LHC project.

The number of useful physics events generated by a collider can be calculated from a parameter called integrated luminosity. For the past decade, CERN has anticipated a series of upgrades that will increase the LHC's integrated luminosity 10-fold—the goal of the High Luminosity LHC project, consistently recognized as a top priority for the worldwide particle physics program. This goal presents extraordinary challenges, requiring a global effort to push the state of the art in a number of critical technologies.

The most specific need is for more powerful magnets to focus the proton beams at the interaction points. Not only must the magnets produce a stronger field, they will also require a larger temperature margin and have to cope with the intense radiation, which comes hand in hand with the planned increase in the rate of energetic collisions. These requirements go beyond the capabilities of niobium titanium, the material on which all previous accelerator superconducting magnets have been based.

Modern niobium tin is an advanced superconducting material that can operate at a higher magnetic field and with a wider temperature margin than niobium titanium. Unfortunately, niobium tin is brittle and sensitive to strain—critical factors where intense electrical currents and strong magnetic fields create enormous forces as the magnets are energized.

Large forces can damage the fragile conductor or cause sudden displacements of the superconducting coils, releasing energy as heat and possibly resulting in a loss of the magnets' superconducting state, called a "quench." When combined temperature, field, and current density cross a critical boundary into ordinary conductivity, the enormous flood of electrons that previously rushed unimpeded through the superconductor slams into a wall of electrical resistance. 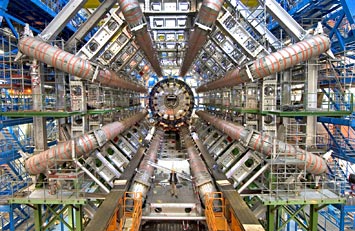 Accelerator magnets are designed to withstand these disruptive and potentially damaging events. Nevertheless, the ability to reach the operating level with few or no quenches is an essential performance requirement.

In order to address these challenges, LARP adopted a mechanical support structure based on a thick aluminum shell, pre-tensioned at room temperature using water-pressurized bladders and interference keys. This design concept, developed at Berkeley Lab under the DOE General Accelerator Development program, was compared to the traditional collar-based clamping system originally used in Fermilab's Tevatron and all subsequent high energy accelerators, and scaled-up to 4 m length in the LARP Long Racetrack and Long Quadrupoles. The HQ models further refined this mechanical design approach, in particular by incorporating full coil alignment.

LARP's HQ02a is designed like all LHC magnets to operate in superfluid helium at temperatures close to absolute zero. However, it has a larger beam aperture than the present focusing magnets—120 millimeters in diameter compared to 70 millimeters—and the magnetic field in the superconducting coils that surround the magnet reaches 12 tesla, 50 percent higher than the present 8 tesla. The corresponding field gradient, the rate of increase of field strength over the aperture, is 170 tesla per meter.

Another key objective of the HQ02a design is to minimize any deviations from the precise magnetic field patterns required to focus the beams at the interaction point, and to maintain this high field quality during ramping up to full magnetic field strength. To address these requirements, the LARP High-Field Quadrupole program incorporated a newly designed cable to minimize induced currents, plus precise alignment at all phases of coil fabrication, assembly and magnetic excitation.

"The desired performance characteristics were clearly demonstrated by the test recently completed at Fermilab," says Berkeley Lab's GianLuca Sabbi, who directed the HQ02 development. "The magnet quickly achieved its design field gradient with low sensitivity to ramp-rate effects. This result was made possible by the expertise and dedication of many scientists, engineers, and technicians at all the collaborating laboratories."

As the last step in a decade-long progression of niobium-tin technology advancements by LARP, the sterling performance of HQ02a has reaffirmed the key design elements for focusing magnets that will meet the needs of CERN's High Luminosity upgrade.

"This is a major step forward in reaching our ultimate goals," said Bruce Strauss, LARP program manager at DOE's Office of Science. "It should not be regarded as a single accomplishment but rather the realization of a significant number of individual goals in the design, construction, and testing of Nb3Sn beam-line magnets."

The development of HQ02a was a major collaborative undertaking involving the LARP laboratories and their industrial partners. The superconducting niobium-tin wire was manufactured by Oxford Superconducting Technology of New Jersey, cabled at Berkeley Lab, and insulated with a fiberglass sleeve by New England Electric Wire. The coils were wound at Berkeley Lab with parts designed and procured by Fermilab, then sent to Brookhaven Lab for high-temperature reaction and impregnation with epoxy resin. Magnet assembly was performed at Berkeley Lab and the test was performed at Fermilab. Additional tests at Fermilab and CERN are expected in the next months.

Among the key contributors are Dan Dietderich, Arup Ghosh and Arno Godeke for the development, fabrication and characterization of the new cable; Mike Anerella, Franck Borgnolutti, Rodger Bossert, Dan Cheng, Helene Felice, Abdi Salehi, Jesse Schmaltzle, and Miao Yu for the HQ02 magnet design, fabrication, and assembly; Maxim Martchevsky and Prabir Roy for the improved electrical instrumentation and high voltage testing; Guram Chlachidze for planning and execution of the test, together with Joe DiMarco, Darryl Orris, Tiina Salmi, and Xiaorong Wang; Giorgio Ambrosio for contributions to the coil analysis and revision process as the leader of the Long High-Field Quadrupole program; and Ezio Todesco for his support and advice as the magnet work package coordinator in the High Luminosity LHC project.

Fermilab is America's premier national laboratory for particle physics research. A U.S. Department of Energy Office of Science laboratory, Fermilab is located near Chicago, Illinois, and operated under contract by the Fermi Research Alliance, LLC. Visit Fermilab's website at www.fnal.gov and follow us on Twitter at @FermilabToday.