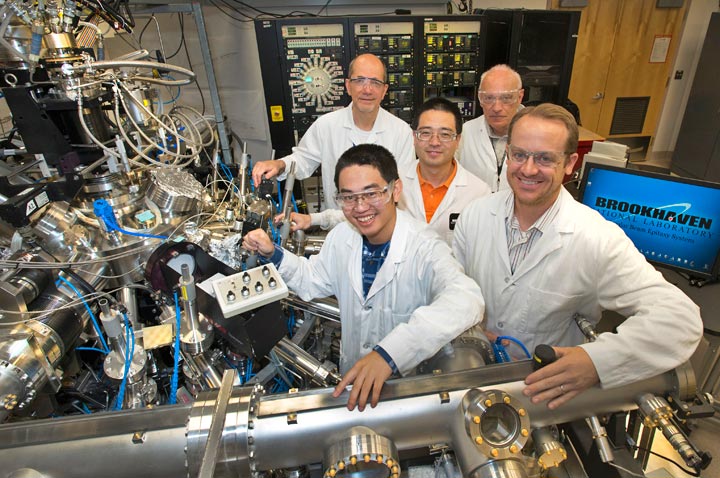 UPTON, NY—Superconductors carry electricity with zero loss, but that perfect performance only occurs at temperatures hundreds of degrees below zero. Warmed beyond those frigid conditions, the materials cross a critical temperature threshold and the superconductivity breaks down. But high-temperature superconductors (HTS)—warmer, but still subzero—may have untapped potential because their underlying mechanism remains a mystery. Unlocking that unknown HTS source and engineering new superconductor configurations could drive that critical temperature high enough to revolutionize energy technology.

"We are exploring uncharted territory with unprecedented precision."

Now, scientists at the U.S. Department of Energy's (DOE) Brookhaven National Laboratory have discovered an unexpected and anomalous pattern in the behavior of one high-performing class of HTS materials. In the new frontier of interface physics, two non-conducting materials can be layered to produce HTS behavior, with tantalizing and mystifying results. Testing a sample set of unprecedented size—more than 800 distinct, custom-made materials—the researchers found that the critical temperature for superconductivity remained constant across a wide range of atomic compositions.

"Theory predicted that the critical temperature in these interface samples would depend strongly on the electron content, but we saw no such dependence," said Brookhaven physicist Ivan Bozovic, lead investigator on the new study published online August 4, 2013, in the journal Nature Materials. "We are exploring uncharted territory with unprecedented precision."

Scientists can tweak the average number of electrons present in HTS films—called the doping level or carrier density—to optimize performance and explore the poorly understood phenomenon. The lanthanum, strontium, copper, and oxygen (LSCO) films used in this study change based on that doping level, transforming into under-doped insulator, a well doped superconductor, or an over-doped and non-superconducting metal. Much HTS research is dedicated to exploring the "just right" regime in the middle, but the ends of the spectrum hold considerable potential.

"Years ago, we discovered something truly remarkable at the interface between an LSCO insulator and an over-doped metal," Bozovic said. "An unpredicted superconductivity emerged with a significantly enhanced critical temperature of more than 50 Kelvin."

That temperature may be frosty (-370 degrees Fahrenheit), but the interface threshold is downright balmy compared to traditional superconductors and even 25 percent warmer than single-phase LSCO materials. Faced with this promising puzzle, the Brookhaven Lab team set out to test the many possible atomic configurations of LSCO interface superconductors.

To map the relatively simple phase diagram of water—its journey from solid ice to gaseous vapor—the temperature must be incrementally increased. Leaping up by 10 degrees, for example, would leave considerable gaps and reveal very little about the exact phase transitions or how to harness them.

"To pinpoint the parameters of interface HTS, which is characterized by quantum phase transitions rather than thermal, we tuned the carrier density," Bozovic said. "So unlike the simple application of heat, we had to alter the atomic composition of our samples."

Without confirmed theories on interface superconductivity to guide design, each electron configuration must be synthesized and directly tested. And to make matters even more challenging, the Brookhaven collaboration needed hundreds of these precisely tailored LSCO samples.

"When studying complex materials, one needs robust statistics to identify trends—finding what is ubiquitous or intrinsic and filtering out the random and irrelevant," Bozovic said. "So we fabricated more than 800 samples, each one almost atomically perfect, with subtle changes in the doping level."

To accomplish this feat, the scientists used a custom-designed atomic layer-by-layer molecular beam epitaxy system (ALL-MBE) at Brookhaven Lab. The MBE group, which Bozovic leads, grew the thin LSCO films inside strictly controlled vacuum chambers. They then lithographically patterned the films—a bit like micrometer-scale printing—into an array of distinct pixels, each with a slightly different chemical composition. The researchers then measured the flow of current against the related doping levels in each pixel to chart the rise and fall of HTS.

"Our technique accelerated the sample testing process by 30 times or more," Bozovic said. "More importantly, we could vary the doping level in steps one hundred times smaller than in standard methods."

To the surprise of the Brookhaven scientists, the critical temperature for interface superconductivity in each of the 800 samples stayed constant at about 40 Kelvin. The doping level, even at the optimum levels predicted by theoretical models, did not appear to shift the electro-chemical potential of the HTS materials.

"The results pose a new challenge to HTS theories," Bozovic said. "This study exemplifies the rich puzzle of interface physics and the other new discoveries that can be made through advanced experimentation."

The research was funded by the DOE's Office of Science, the Serbian Ministry of Science and Education, and the National Science Foundation.

DOE's Office of Science is the single largest supporter of basic research in the physical sciences in the United States, and is working to address some of the most pressing challenges of our time. For more information, please visit http://science.energy.gov.