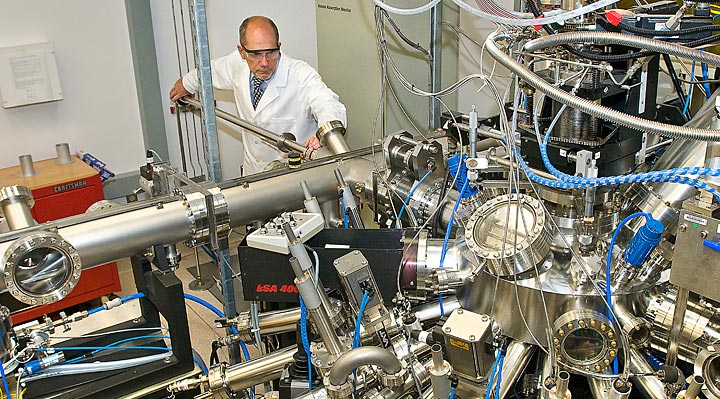 UPTON, NY – The next generation of sustainable energy systems, from magnetic storage to offshore wind turbines, hinges in part on high-temperature superconductors (HTS), which can carry current with zero loss and perfect efficiency. Unfortunately, that loss-free behavior comes at the cost of extreme and inefficient cooling, and the fundamental physics that governs the behavior of these remarkable materials remains mysterious.

Bozovic and his team work with three control “knobs” that impact the emergence and the quenching of HTS: chemical composition, magnetic field, and temperature.

Chemical composition describes the molecular makeup of the material and determines the density of charge carriers, which in turn determines whether the material is metallic or insulating. Bozovic uses a custom-built atomic layer-by-layer molecular beam epitaxy (ALL-MBE) system at Brookhaven Lab to grow atomically precise samples. In this new study, the team worked with insulating La2−xSrxCuO4 cuprate (copper-oxide) thin films grown specifically to exhibit those telltale superconducting fluctuations.

The third control is temperature. Often, HTS experiments begin with frigid conditions close to absolute zero, and researchers watch for the emergence of resistivity as they steadily increase the temperature. These latest results, however, were detected as the sample grew colder and colder. Contrary to expectations, the research team found that superconducting fluctuations vanished very close to absolute zero.

Now, scientists at the U.S. Department of Energy’s Brookhaven National Laboratory and other collaborating institutions have discovered unexpected behavior that could be key to solving the HTS puzzle. Rising temperature always quenches (stops) superconductivity, but the new study – to be published online Nov. 18 in Nature Materials – reveals that extremely low temperatures can cause structural defects to produce a similar shutdown. This observation, which helps illuminate the murky emergence of superconductivity, could one day open the door for scientists to engineer inexpensive, high capacity, room-temperature superconductors.

“Superconductivity generally gets more robust as the sample’s temperature is decreased,” said study coauthor Ivan Bozovic, a physicist in Brookhaven Lab’s Condensed Matter Physics and Materials Science Department. “So we were surprised to find that traces of superconductivity actually vanish completely at the lowest temperatures in certain samples.”

Superconductivity, even in the relative warmth of so-called high-temperature versions, only emerges in frigid and well-controlled environments. If too warm or otherwise imperfect, a superconducting material can turn into an insulator or semiconductor and lose its most-desired property. Bozovic’s team precisely examined the curious space where this transformation occurs in copper-oxide (cuprate) materials, an area known as the superconductor-insulator transition.

This unexplained and exotic HTS transition actually follows some familiar stovetop behavior. When water is heated to a boil, the liquid doesn’t instantaneously transform into a gas – instead, the transformation occurs gradually. Along the bottom of the pot, discrete and fleeting bubbles appear with increasing frequency as the heat rises and slowly builds to a full boil. During this transition, most of the water remains in liquid form, though it contains sporadic and isolated pockets of the vapor phase of matter.

Similarly, superconducting islands intermittently emerge and rapidly vanish in cuprate insulators near the superconductor-insulator transition. These strange and disconnected bubbles are called superconducting fluctuations. Understanding the precise conditions under which these fluctuations emerge and vanish reveals fundamental characteristics of this poorly understood phenomenon.

Imagine that electricity travels like running water, with the flow of current between electrodes resembling the motion of a river rushing downhill. In this analogy, the cuprate acts as a custom-built channel designed to carry electricity as efficiently as possible, just as a smoothly engineered canal carries water.

If the canal is poorly constructed, full of sudden and jagged pits, the water level directly impacts the quality of the flow. A high volume of water will race continuously even if occasionally given to the turbulence of crashing whitewater rapids. If, however, the water level falls below some critical value, the current will tumble into those pits and slow down or stop completely.

In these HTS experiments, the scientists measured the flow of electricity to uncover the structure of the cuprate “canal.” The water volume corresponds to the density of electrons in the system, which Bozovic was able to fine-tune with his custom atomic layer-by-layer molecular beam epitaxy (ALL-MBE) synthesis technique (see sidebar). While the films were atomically smooth, they contained deliberately built-in defects – randomly distributed strontium atoms. These imperfections act like “pits’ that can trap flowing electrons, rendering them immobile.

“The traps are there all the time, but the electrons only become stuck at extremely low temperature,” Bozovic said. “This behavior, called electron localization, makes the material insulating. With some heating, however, the electrons gain enough kinetic energy to jump out of the holes and maintain metallic conductivity – and, in the present case, superconductivity.”

Probing this behavior further, the researchers not only discovered that the fluctuations vanish beyond that super-cold threshold, but that the trapping pattern subtly changes with each test. As it turns out, resistivity depends not just on temperature, but also on the material’s memory of its own history – how and where the electrons were previously trapped. This phenomenon, called hysteresis, strongly indicates that the underlying mechanism behind the superconductor-insulator transition is tied to electron localization.

Additional collaborators on this research include Anthony Bollinger and Gennady Logvenov of Brookhaven Lab, Xiaoyan Shi and Dragana Popovic of the National High Magnetic Field Lab, and Christos Panagopoulos of the University of Crete and Nanyang Technological University.

The research was funded by DOE’s Office of Science, the National Science Foundation Division of Materials Research, the State of Florida, EURYI, and the National Research Foundation of Singapore.