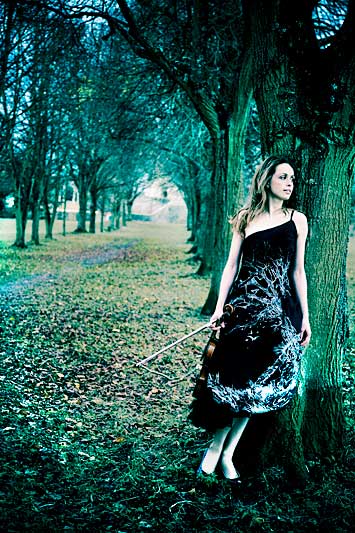 UPTON, NY — Violinist Ruth Palmer will present a solo recital, titled "Hidden Acoustics," at the U.S. Department of Energy's Brookhaven National Laboratory on Wednesday, September 18, at noon in Berkner Hall. Sponsored by Brookhaven Science Associates, the company that manages the Lab, the concert is free and open to the public. All visitors to the Laboratory 16 and older must bring a photo I.D.

Described as "the most distinctive violinist of her generation" by Anna Picard of Britain's national morning newspaper, The Independent, Ruth Palmer won a Classical BRIT award for a debut recording of Shostakovich with the Philharmonia Orchestra. She subsequently recorded discs for EMI and AVIE, both with the Royal Liverpool Philharmonic. Her latest award-winning CD, Hidden Acoustics, produced by Nimbus Alliance Records, features solo Bach and Bartok, and was accompanied by a concert series deemed "hugely impressive" by Britain's national daily newspaper, The Guardian.

Palmer has performed across the United States, Europe, Asia, and Australia, with conductors including Yutaka Sado, Andre de Ridder, Vasily Petrenko, and Carlo Rizzi. She has directed the Academy of St. Martin in the Fields (an English chamber orchestra based in London) from the violin. In addition to international broadcasts of her performances, Palmer has also been featured in radio and television BBC documentaries about Shostakovich, and appears as protagonist in a film about Stradivari, In Search of the Messiah, which was screened on networks worldwide.

Her collaborations include United Kingdom and world premieres by composers Sir John Tavener, and her father, Geoff Palmer, and premieres of composer-players, including Sir Richard Rodney Bennett, Gabriela Montero and Gwilym Simcock.

Palmer is an ambassador for the charities Music for All and Allianz Musical Insurance. Proceeds from sales of her CD Hidden Acoustics benefits Kids for Kids, a charity that helps children in Darfur.

Palmer's program at Brookhaven will include works by Bach and Ysaye.