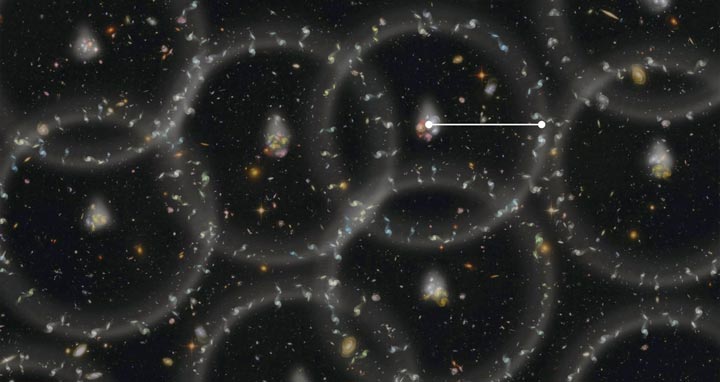 This is an artist's concept of the new measurement of the size of the Universe. The gray spheres show the pattern of the "baryon acoustic oscillations" from the early Universe. Galaxies today have a slight tendency to align on the spheres — the alignment is greatly exaggerated in this illustration. By comparing the size of the spheres (white line) to the predicted value, astronomers can determine to one-percent accuracy how far away the galaxies are.

Today the Baryon Oscillation Spectroscopic Survey (BOSS) Collaboration announced that BOSS has measured the scale of the universe to an accuracy of one percent. This and future measures at this precision are the key to determining the nature of dark energy.

"It's likely the universe extends forever in space and will go on forever in time. Our results are consistent with an infinite universe."

BOSS will continue gathering data until June, 2014. However, says Martin White, a member of Berkeley Lab, a professor of physics and astronomy at the University of California at Berkeley, and chair of the BOSS science survey team, "We've done the analysis now because we have 90 percent of BOSS's final data and we're tremendously excited by the results."

Baryon acoustic oscillations (BAO) are the regular clustering of galaxies, whose scale provides a "standard ruler" to measure the evolution of the universe's structure. Accurate measurement dramatically sharpens our knowledge of fundamental cosmological properties, including how dark energy accelerates the expansion of the universe.

Combined with recent measures of the cosmic microwave background radiation (CMB) and supernova measures of accelerating expansion, the BOSS results suggest that dark energy is a cosmological constant whose strength does not vary in space or time. Although unlikely to be a flaw in Einstein's General Theory of Relativity, the authors of the BOSS analysis note that "understanding the physical cause of the accelerated expansion remains one of the most interesting problems in modern physics."

Among other cosmic parameters, says White, the BOSS analysis "also provides one of the best-ever determinations of the curvature of space. The answer is, it's not curved much."

Calling a three-dimensional universe "flat" means its shape is well described by the Euclidean geometry familiar from high school: straight lines are parallel and triangles add up to 180 degrees. Extraordinary flatness means the universe experienced relatively prolonged inflation, up to a decillionth of a second or more, immediately after the big bang.

"One of the reasons we care is that a flat universe has implications for whether the universe is infinite," says Schlegel. "That means – while we can't say with certainty that it will never come to an end – it's likely the universe extends forever in space and will go on forever in time. Our results are consistent with an infinite universe."

The BOSS analysis is based on SDSS-III's Data Releases 10 and 11 (DR 10 and DR 11) and has been submitted for publication in the Monthly Notices of the Royal Astronomical Society; the analysis is available online.

Ripples in a sea of galaxies

Brookhaven National Lab is a member of BOSS, the largest of the four surveys that make up the Sloan Digital Sky Survey III, which maps the sky over the Northern Hemisphere.

Brookhaven cosmologist Erin Sheldon worked with the BOSS team to select the galaxies to target for measurement with the 2.5-meter Sloan telescope in New Mexico. He developed software that picks the galaxies from the tens of millions of potential targets.

"The measurement presented in the press release involves determining the distance to a large number of galaxies," Sheldon says. "But in actuality, we don't measure the distance directly, rather we measure the recession velocity – how fast the galaxy is moving away from us."

The theory of cosmology then helps scientists determine the true distance of the galaxies. "The goal is to use this data to test if the theory is correct, and if so, what properties our universe needs to explain the data," he says. "The only way to do that is to have a measure of the true distance."

The BOSS analysis incorporates spectra of 1,277,503 galaxies and covers 8,509 square degrees of the sky visible from the northern hemisphere. This is the largest sample of the universe ever surveyed at this density. When complete, BOSS will have collected high-quality spectra of 1.3 million galaxies, plus 160,000 quasars and thousands of other astronomical objects, covering 10,000 square degrees.

Periodic ripples of density in visible matter ("baryons," for short) pervade the universe like raindrops on the surface of a pond. Regular galaxy clustering is the direct descendant of pressure waves that moved through the hot plasma of the early universe, which was so hot and dense that particles of light (photons) and particles of matter, including protons and electrons, were tightly coupled together. Invisible dark matter was also part of the mix.

By 380,000 years after the big bang, however, the temperature of the expanding mixture had cooled enough for light to escape, suffusing the newly transparent universe with intense radiation, which in the 13.4 billion years since has continued to cool to today's faint but pervasive cosmic microwave background.

Minute variations in the temperature of the CMB record periodicity in the original density ripples, of which the European Space Agency's Planck satellite has made the most recent and most accurate measures. The same periodicity is preserved in the clustering of the BOSS galaxies, a BAO signal which also mirrors the distribution of underlying dark matter.

Regular clustering at different eras, starting with the CMB, establishes the expansion history of the universe. BOSS collaborator Beth Reid of Berkeley Lab translates the two-dimensional sky coordinates of galaxies, plus their redshifts, into 3-D maps of the density of galaxies in space.

"It's from fluctuations in the density of galaxies in the volume we're looking at that we extract the BAO standard ruler," she says. "To compare different regions of the sky on an equal footing, first we have to undo variations from atmospheric effects or other patterns caused by how we observe the sky with our telescope." The results depend crucially on accurate measures of redshifts, which disclose the galaxies' positions in space and time. But galaxies don't move in lock step.

"When galaxies are close together their mutual gravitational attraction pushes them around and interferes with attempts to measure large-scale structure," Schlegel says. "Their peculiar motion makes it hard to write a formula for overall gravitational growth."

However, says Reid, "We have a very good model for what these distortions look like. The galaxy density field shows you where there are concentrations of matter, and the peculiar velocity field points in the direction of the net effect of all the local over- and under-densities."

"The BOSS data are awe-inspiring," says Martin White, "but many other pieces had to be put into place before we could get what we're after out of the data." Complex computer algorithms were essential for reconciling the inherent uncertainties. "We made thousands of model universes in a computer, and then observed them as BOSS would do and ran our analysis on them to answer the questions of 'What if?'"

By gauging how well their algorithms could analyze these model universes, known as "mocks" and based on catalogues of realistic but artificial galaxies, the experienced BOSS team was able to assess and fine-tune the algorithms when they were applied to the real BOSS data.

The National Energy Research Scientific Computing Center (NERSC), based at Berkeley Lab, was critical to the analysis and the creation of the mocks. Says White, "NERSC set aside resources for us to push analyses through quickly when we were up against deadlines. They provide a virtual meeting place where members of the collaboration from all around the world can come together on a shared platform, with both the data and the computational resources they need to perform their research."

BOSS has now provided the most accurate calibration ever of BAO's standard ruler. The universe's expansion history has been measured with unprecedented accuracy during the very stretch of ancient time, over six billion years in the past, when expansion had stopped slowing and acceleration began. But accurate as they are, the new BOSS results are just the beginning. Greater coverage and better resolution in scale are essential to understanding dark energy itself.

The proposed Dark Energy Spectroscopic Instrument (DESI), based on an international partnership of nearly 50 institutions led by Berkeley Lab, would enable the Mayall Telescope on Kitt Peak in Arizona to map over 20 million galaxies, plus over three million quasars, in 14,000 square degrees of the northern sky. By filling in the missing eons that BOSS can't reach, DESI could sharpen and extend coverage of the expansion history of the universe from the first appearance of the cosmic background radiation to the present day.

In the meantime, BOSS, ahead of schedule for completion in June, 2014, continues to be the premier instrument for mapping the universe.

The SDSS-III release on this result may be found at http://www.sdss3.org/press/onepercent.php.

Funding for SDSS-III has been provided by the Alfred P. Sloan Foundation, the Participating Institutions, the National Science Foundation, and the U.S. Department of Energy Office of Science. The SDSS-III web site is http://www.sdss3.org.

Lawrence Berkeley National Laboratory addresses the world's most urgent scientific challenges by advancing sustainable energy, protecting human health, creating new materials, and revealing the origin and fate of the universe. Founded in 1931, Berkeley Lab's scientific expertise has been recognized with 13 Nobel prizes. The University of California manages Berkeley Lab for the U.S. Department of Energy's Office of Science. For more, visit http://www.lbl.gov.

DOE's Office of Science is the single largest supporter of basic research in the physical sciences in the United States and is working to address some of the most pressing challenges of our time. For more information, please visit the Office of Science website at science.energy.gov.