UPTON, NY — Commack Middle School won the Brookhaven National Laboratory/Long Island Regional Middle School Science Bowl held at the Lab on Saturday, March 1, 2014.  Commack competed against 19 teams from 12 schools across the region in one of the nation's 50 regional competitions in the Annual U.S. Department of Energy National Science Bowl®.

Diverse student teams are comprised of four students, one alternate, and a teacher who serves as an advisor and coach. These teams face off in a fast-paced, question-and-answer format, being tested on a range of science disciplines including life science, physics, earth and space science, energy, mathematics, and general science. The team answering the most questions correctly wins the top honor.

More than 9,500 high school students and 4,500 middle school students across the nation are competing at 70 high school and 50 middle school regional Science Bowl tournaments this year. The regional tournaments, which host 15 to 70 teams, are sponsored by federal agencies, national laboratories, educational institutions, and non-profit organizations.

Another featured event at the competition, the Electric Car Competition, invites students to design, build, and race battery-powered model cars. This competition tests the creative engineering and troubleshooting skills of many of the brightest math and science students in the nation as they gain hands-on experience in the automotive design process and with electric battery technology. 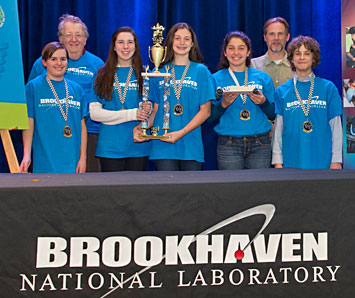 Pictured with their coaches, Robert Giglio and Karl Spielmann, are the students from Our Lady of the Hamptons School who won first place in the Electric Car Competition at Brookhaven Lab on March 1 (left to right): Brian Sullivan,Maria Lucatorto, Lucia Chrysler, Olivia Valle, and Dante Spielmann.

Our Lady of the Hamptons School had the car with the fastest time and took the top spot for this portion of the contest. William Floyd Middle School took second place, and Bellport Middle School took third place. Bellport also won the award for the best design.

"The National Science Bowl challenges students to excel and heightens their interest in fields vital to America's continued scientific advancement," Energy Secretary Moniz said. "Congratulations to these students for advancing to the National Finals. I wish them the best of luck in the competition."

"You could feel the excitement of the final match from the students on stage as well as everyone in the audience," said Kenneth White, manager of the Lab's Office of Educational Programs. "Although there can only be one winning team for each event, we applaud all of the students who participated in the Science Bowl and the Electric Car Competition. They possess the important qualities needed to become our next generation of scientists and engineers — knowledge, enthusiasm, and competitive spirit."

The competition at Brookhaven is sponsored by Brookhaven Science Associates (BSA), the company that manages and operates the Lab for the U.S. Department of Energy. BSA provides Science Bowl t-shirts for all participating students and the trophies and medals for the winning teams.