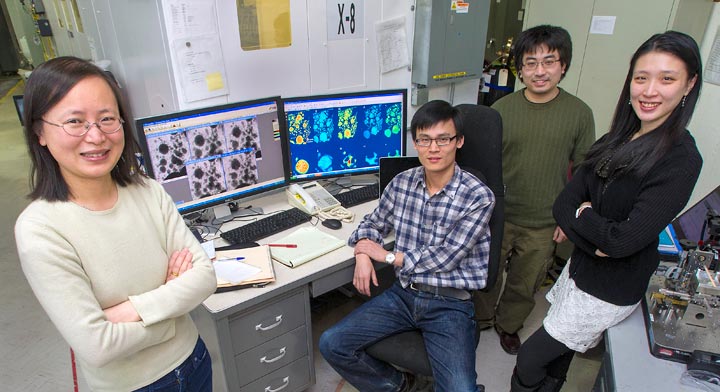 UPTON, NY—Scientists at the U.S. Department of Energy's Brookhaven National Laboratory have made the first 3D observations of how the structure of a lithium-ion battery anode evolves at the nanoscale in a real battery cell as it discharges and recharges. The details of this research, described in a paper published in Angewandte Chemie, could point to new ways to engineer battery materials to increase the capacity and lifetime of rechargeable batteries.

"For the first time, we have captured the microstructural details of an operating battery anode in 3D with nanoscale resolution."

"This work offers a direct way to look inside the electrochemical reaction of batteries at the nanoscale to better understand the mechanism of structural degradation that occurs during a battery's charge/discharge cycles," said Brookhaven physicist Jun Wang, who led the research. "These findings can be used to guide the engineering and processing of advanced electrode materials and improve theoretical simulations with accurate 3D parameters."

Chemical reactions in which lithium ions move from a negatively charged electrode to a positive one are what carry electric current from a lithium-ion battery to power devices such as laptops and cell phones. When an external current is applied—say, by plugging the device into an outlet—the reaction runs in reverse to recharge the battery.

The top row shows how tin particles evolve in three dimensions during the first two lithiation–delithiation cycles in the model lithium-ion rechargeable battery cell. The bottom row shows "cross-sectional" images of a single tin particle during the first two cycles. Severe fracture and pulverization occur during the initial stage of cycling. The particle stays mechanically stable after the first cycle, while the electrochemical reaction proceeds reversibly.

Scientists have long known that repeated charging/discharging (lithiation and delithiation) introduces microstructural changes in the electrode material, particularly in some high-capacity silicon and tin-based anode materials. These microstructural changes reduce the battery's capacity—the energy the battery can store—and its cycle life—how many times the battery can be recharged over its lifetime. Understanding in detail how and when in the process the damage occurs could point to ways to avoid or minimize it.

"It has been very challenging to directly visualize the microstructural evolution and chemical composition distribution changes in 3D within electrodes when a real battery cell is going through charge and discharge," said Wang.

Achieving nanoscale resolution has been the ultimate goal.

"For the first time," said Wang, "we have captured the microstructural details of an operating battery anode in 3D with nanoscale resolution, using a new in-situ micro-battery-cell we developed for synchrotron x-ray nano-tomography—an invaluable tool for reaching this goal." This advance provides a powerful new source of insight into microstructural degradation.

3D images of changes in tin particles during the first two charge/discharge cycles of a model lithium-ion battery cell.

Developing a working micro battery cell for nanoscale x-ray 3D imaging was very challenging. Common coin-cell batteries aren't small enough, plus they block the x-ray beam when it is rotated.

"The whole micro cell has to be less than one millimeter in size but with all battery components—the electrode being studied, a liquid electrolyte, and the counter electrode—supported by relatively transparent materials to allow transmission of the x-rays, and properly sealed to ensure that the cell can work normally and be stable for repeated cycling," Wang said. The paper explains in detail how Wang's team built a fully functioning battery cell with all three battery components contained within a quartz capillary measuring one millimeter in diameter.

By placing the cell in the path of high-intensity x-ray beams generated at beamline X8C of Brookhaven's National Synchrotron Light Source (NSLS), the scientists produced more than 1400 two-dimensional x-ray images of the anode material with a resolution of approximately 30 nanometers. These 2D images were later reconstructed into 3D images, much like a medical CT scan but with nanometer-scale clarity. Because the x-rays pass through the material without destroying it, the scientists were able to capture and reconstruct how the material changed over time as the cell discharged and recharged, cycle after cycle. 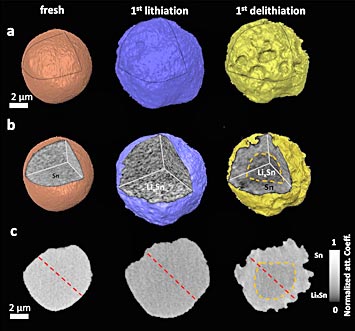 These images show how the surface morphology and internal microstructure of an individual tin particle changes from the fresh state through the initial lithiation and delithiation cycle (charge/discharge). Most notable are the expansion in overall particle volume during lithiation, and reduction in volume and pulverization during delithiation. The cross-sectional images reveal that delithiation is incomplete, with the core of the particle retaining lithium surround by a layer of pure tin.

Using this method, the scientists revealed that, "severe microstructural changes occur during the first delithiation and subsequent second lithiation, after which the particles reach structural equilibrium with no further significant morphological changes."

Specifically, the particles making up the tin-based anode developed significant curvatures during the early charge/discharge cycles leading to high stress. "We propose that this high stress led to fracture and pulverization of the anode material during the first delithiation," Wang said. Additional concave features after the first delithiation further induced structural instability in the second lithiation, but no significant changes developed after that point.

"Our results suggest that the substantial microstructural changes in the electrodes during the initial electrochemical cycle—called forming in the energy storage industry—are a critical factor affecting how a battery retains much of its current capacity after it is formed," she said. "Typically a battery loses a substantial portion of its capacity during this initial forming process. Our study will improve understanding of how this happens and help us develop better controls of the forming process with the goal of improving the performance of energy storage devices." 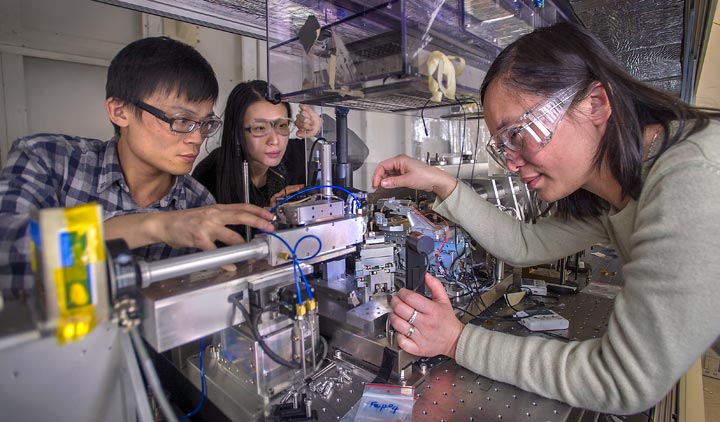 Wang pointed out that while the current study looked specifically at a battery with tin as the anode, the electrochemical cell her team developed and the x-ray nanotomography technique can be applied to studies of other anode and cathode materials. The general methodology for monitoring structural changes in three dimensions as materials operate also launches an opportunity to monitor chemical states and phase transformations in catalysts, other types of materials for energy storage, and biological molecules.

The transmission x-ray microscope used for this study will soon move to a full-field x-ray imaging (FXI) beamline (PDF) at NSLS-II, a world-class synchrotron facility now nearing completion at Brookhaven Lab. This new facility will produce x-ray beams 10,000 times brighter than those at NSLS, enabling dynamic studies of various materials as they perform their particular functions.

Jiajun Wang and Yu-chen Karen Chen-Wiegart are research associates in Wang's research group and performed the work together.

This research was funded as a Laboratory Directed Research and Development project at Brookhaven Lab and by the DOE Office of Science. The transmission x-ray microscope used in this work was built with funding from the American Recovery and Reinvestment Act.