The following news release was issued by Johns Hopkins Bloomberg School of Public Health. The National Synchrotron Light Source (NSLS) at Brookhaven National Laboratory was one of two U.S. Department of Energy Office of Science light sources used to decipher the structure of key molecular components of the bacterial immune system. Annie Heroux, a biologist and crystallography specialist at Brookhaven Lab, is a co-author on the paper published today in Science.

Researchers Now Better Understand How Bacteria Can So Quickly Protect Itself From Harm, Could Help Unlock Clues About Antibiotic Resistance 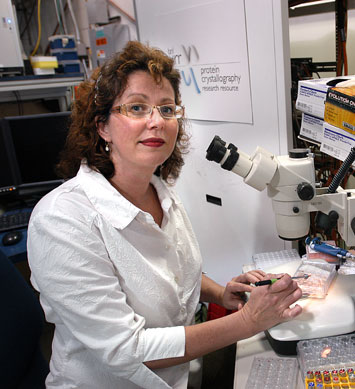 Bacteria's ability to destroy viruses has long puzzled scientists, but researchers at the Johns Hopkins Bloomberg School of Public Health say they now have a clear picture of the bacterial immune system and say its unique shape is likely why bacteria can so quickly recognize and destroy their assailants.

The researchers drew what they say is the first-ever picture of the molecular machinery, known as Cascade, which stands guard inside bacterial cells. To their surprise, they found it contains a two-strand, unencumbered structure that resembles a ladder, freeing it to do its work faster than a standard double-helix would allow.

The findings, published online Aug. 14 in the journal Science, may also provide clues about the spread of antibiotic resistance, which occurs when bacteria adapt to the point where antibiotics no longer work in people who need them to treat infections, since similar processes are in play. The World Health Organization (WHO) considers antibiotic resistance a major threat to public health around the world.

"If you understand what something looks like, you can figure out what it does," says study leader Scott Bailey, PhD, an associate professor in the Bloomberg School's Department of Biochemistry and Molecular Biology. "And here we found a structure that nobody's ever seen before, a structure that could explain why Cascade is so good at what it does."

For their study, Bailey and his colleagues used something called X-ray crystallography to draw the picture of Cascade, a key component of bacteria's sophisticated immune system known as CRISPR, an acronym for Clustered Regularly Interspaced Short Palindromic Repeats. Cascade uses the information housed in sequences of RNA as shorthand to identify foreign invaders and kill them.

Much of the human immune system is well understood, but until recently scientists didn't realize the level of complexity associated with the immune system of single-cell life forms, including bacteria. Scientists first identified CRISPR several years ago when trying to understand why bacterial cultures used to make yogurt succumbed to viral infections. Researchers subsequently discovered they could harness the CRISPR bacterial immune system to edit DNA and repair damaged genes. One group, for example, was able to remove viral DNA from human cells infected with HIV.

Bailey's work is focused on how Cascade is able to help bacteria fight off viruses called bacteriophages. The Cascade system uses short strands of bacterial RNA to scan the bacteriophage DNA to see if it is foreign or self. If foreign, the cell launches an attack that chews up the invading bacteriophage.

To "see" how this happens, Bailey and his team converted Cascade into a crystalized form. Technicians at the National Synchrotron Light Source at Brookhaven National Laboratory in Upton, New York, and the Stanford Synchrotron Radiation Lightsource then trained high-powered X-rays on the crystals. The X-rays provided computational data to the Bloomberg School scientists allowing them to draw Cascade, an 11-protein machine that only operates if each part is in perfect working order.

What they saw was unexpected. Instead of the RNA and DNA wrapping around each other to form what is known as a double-helix structure, in Cascade the DNA and RNA are more like parallel lines, forming something of a ladder. Bailey says that if RNA had to wrap itself around DNA to recognize an invader – and then unwrap itself to look at the next strand – the process would take too much time to ward off infection. With a ladder structure, RNA can quickly scan DNA.

In the new study, Bailey says his team determined that the RNA scans the DNA in a manner similar to how humans scan text for a key word. They break long stretches of characters into smaller bite-sized segments, much like words themselves, so they can be spotted more easily.

Since the CRISPR-Cas system naturally acts as a barrier to the exchange of genetic information between bacteria and bacteriophages, its function can offer clues to how antibiotic resistance develops and ideas for how to keep it from happening.

"We're finding more pieces to the puzzle," Bailey says. "This gives us a better understanding of how these machines find their targets, which may help us harness the CRISPR system as a tool for therapy or manipulation of DNA in a lab setting. And it all started when someone wanted to make yogurt more cheaply."

"Crystal structure of a CRISPR RNA-guided surveillance complex bound to a ssDNA target" was written by Sabin Mulepati, Annie Heroux and Scott Bailey.