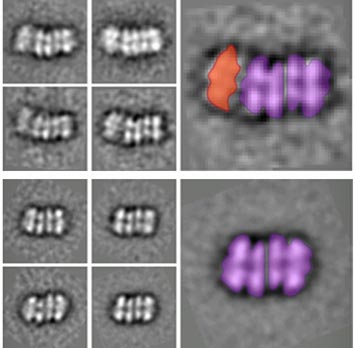 Averaged electron microscope images of two intermediate helicase structures. The top shows an ORC binding the two ring structures together, and the bottom shows the completed double-ring structure with the ORC detached.

UPTON, NY—The proteins that drive DNA replication—the force behind cellular growth and reproduction—are some of the most complex machines on Earth. The multistep replication process involves hundreds of atomic-scale moving parts that rapidly interact and transform. Mapping that dense molecular machinery is one of the most promising and challenging frontiers in medicine and biology.

Now, scientists have pinpointed crucial steps in the beginning of the replication process, including surprising structural details about the enzyme that "unzips" and splits the DNA double helix so the two halves can serve as templates for DNA duplication.

The research combined electron microscopy, perfectly distilled proteins, and a method of chemical freezing to isolate specific moments at the start of replication. The study—authored by scientists from the U.S. Department of Energy's Brookhaven National Laboratory, Stony Brook University, Cold Spring Harbor Laboratory, and Imperial College, London—published on Oct. 15, 2014, in the journal Genes and Development.

"Errors in copying DNA are found in certain cancers, and this work could one day help develop new treatment methods that stall or break dangerous runaway machinery."

"The genesis of the DNA-unwinding machinery is wonderfully complex and surprising," said study coauthor Huilin Li, a biologist at Brookhaven Lab and Stony Brook University. "Seeing this helicase enzyme prepare to surround and unwind the DNA at the molecular level helps us understand the most fundamental process of life and how that process might go wrong. Errors in copying DNA are found in certain cancers, and this work could one day help develop new treatment methods that stall or break dangerous runaway machinery."

The research picks up where two previous studies by Li and colleagues left off. They first determined the structure of the "Origin Recognition Complex" (ORC), a protein that identifies and attaches to specific DNA sites to initiate the entire replication process. The second study revealed how the ORC recruits, cracks open, and installs a crucial ring-shaped protein structure (Mcm2-7) that lies at the core of the helicase enzyme.

But DNA replication is a bi-directional process with two helicases moving in opposite directions. The key question, then, was how does a second helicase core get recruited and loaded onto the DNA in the opposite orientation of the first?

Three-dimensional model (based on electron microscopy data) of the double-ring structure loaded onto a DNA helix.

"To our surprise, we found an intermediate structure with one ORC binding two rings," said Brookhaven Lab biologist and lead author Jingchuan Sun. "This discovery suggests that a single ORC, rather than the commonly believed two-ORC system, loads both helicase rings."

One step further along, the researchers also determined the molecular architecture of the final double-ring structure left behind after the ORC leaves the system, offering a number of key biological insights.

"We now have clues to how that double-ring structure stably lingers until the cell enters the DNA-synthesis phase much later on in replication," said study coauthor Christian Speck of Imperial College, London. "This study revealed key regulatory principles that explain how the helicase activity is initially suppressed and then becomes reactivated to begin its work splitting the DNA." 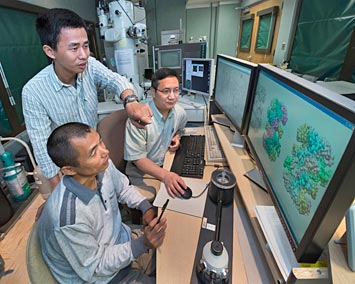 The researchers used proteins from baker's yeast—a model organism for the more complex systems found in animals. The scientists isolated the protein mechanisms involved in replication and removed structures that might otherwise complicate the images.

Once the isolated proteins were mixed with DNA, the scientists injected chemicals to "freeze" the binding and recruitment process at intervals of 2, 7, and 30 minutes.

They then used an electron microscope at Brookhaven to pin down the exact structures at each targeted moment in a kind of molecular time-lapse. Rather than the light used in a traditional microscope, this technique uses focused beams of electrons to illuminate a sample and form images with atomic resolution. The instrument produces a large number of two-dimensional electron beam images, which a computer then reconstructs into three-dimensional structure.

"This technique is ideal because we're imaging relatively massive proteins here," Li said. "A typical protein contains three hundred amino acids, but these DNA replication mechanisms consist of tens of thousands of amino acids. The entire structure is about 20-nanometers across, compared to 4 nanometers for an average protein."

Unraveling the DNA processes at the most fundamental level, the focus of this team's work, could have far-reaching implications.

Additional collaborators on this research include Alejandra Fernandez, Alberto Riera, and Silvia Tognetti of the MRC Clinical Science Centre of Imperial College, London; and Zuanning Yuan of Stony Brook University.

The research was funded by the National Institutes of Health (GM45436, GM74985) and the United Kingdom Medical Research Council.