The National Synchrotron Light Source II detects its first photons, beginning a new phase of the facility's operations. Scientific experiments at NSLS-II are expected to begin before the end of the year.

A crowd gathered on the experimental floor of the National Synchrotron Light Source II to witness "first light," when the x-ray beam entered a beamline for the first time at the facility.

UPTON, NY — The brightest synchrotron light source in the world has delivered its first x-ray beams. The National Synchrotron Light Source II (NSLS-II) at the U.S. Department of Energy's (DOE) Brookhaven National Laboratory achieved "first light" on October 23, 2014, when operators opened the shutter to begin commissioning the first experimental station (called a beamline), allowing powerful x-rays to travel to a phosphor detector and capture the facility's first photons. While considerable work remains to realize the full potential of the new facility, first light counts as an important step on the road to facility commissioning.

"This achievement begins an exciting new chapter of synchrotron science at Brookhaven, building on the remarkable legacy of NSLS, and leading us in new directions we could not have imagined before."

"This is a significant milestone for Brookhaven Lab, for the Department of Energy, and for the nation," said Harriet Kung, DOE Associate Director of Science for Basic Energy Sciences. "The National Synchrotron Light Source II will foster new discoveries and create breakthroughs in crucial areas of national need, including energy security and the environment. This new U.S. user facility will advance the Department's mission and play a leadership role in enabling and producing high-impact research for many years to come."

At 10:32 a.m. on October 23, a crowd of scientists, engineers, and technicians gathered around the Coherent Soft X-ray Scattering (CSX) beamline at NSLS-II, expectantly watching the video feed from inside a lead-lined hutch where the x-ray beam eventually struck the detector. As the x-rays hit the detector, cheers and applause rang out across the experimental hall for a milestone many years in the making.

The team of scientists, engineers, and technicians at the Coherent Soft X-ray Scattering (CSX) beamline gathered around the control station to watch as group leader Stuart Wilkins (seated, front) opened the shutter between the beamline and the storage ring, allowing x-rays to enter the first optical enclosure for the first time.

"This achievement begins an exciting new chapter of synchrotron science at Brookhaven, building on the remarkable legacy of NSLS, and leading us in new directions we could not have imagined before," said Laboratory Director Doon Gibbs. "It's a great illustration of the ways that national labs continually evolve and grow to meet national needs, and it's a wonderful time for all of us. Everyone at the Lab, in every role, supports our science, so we can all share in the sense of excitement and take pride in this accomplishment." 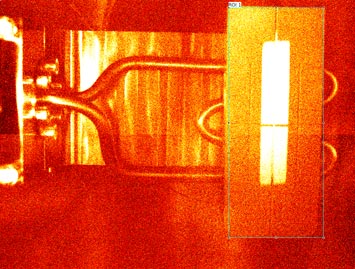 Inside the beamline enclosure, a phosphor detector (the rectangle at right) captured the first x-rays (in white) which hit the mark dead center.

In the heart of the 590,000 square foot facility, an electron gun emits packets of the negatively charged particles, which travel down a linear accelerator into a booster ring. There, the electrons are brought to nearly the speed of light, and then steered into the storage ring, where powerful magnets guide the beam on a half-mile circuit around the NSLS-II storage ring. As the electrons travel around the ring, they emit extremely intense x-rays, which are delivered and guided down beamlines into experimental end stations where scientists will carry out experiments for scientific research and discovery.  NSLS-II accelerator operators have previously stored beam in the storage ring, but they hadn't yet opened the shutters to allow x-ray light to reach a detector until today's celebrated achievement.

"We have been eagerly anticipating this culmination of nearly a decade of design, construction, and testing and the sustained effort and dedication of hundreds of individuals who made it possible," said Steve Dierker, Associate Laboratory Director for Photon Sciences.  'We have more work to do, but soon researchers from around the world will start using NSLS-II to advance their research on everything from new energy storage materials to developing new drugs to fight disease. I'm very much looking forward to the discoveries that NSLS-II will enable, and to the continuing legacy of groundbreaking synchrotron research at Brookhaven."

The National Synchrotron Light Source II detects its first photons, beginning a new phase of the facility's operations. Scientific experiments at NSLS-II are expected to begin before the end of 2014.

NSLS-II, a third-generation synchrotron light source, will be the newest and most advanced synchrotron facility in the world, enabling research not possible anywhere else. As a DOE Office of Science User Facility, it will offer researchers from academia, industry, and national laboratories new ways to study material properties and functions with nanoscale resolution and exquisite sensitivity by providing state-of-the-art capabilities for x-ray imaging, scattering, and spectroscopy.

Currently 30 beamlines are under development to take advantage of the high brightness of the x-rays at NSLS-II. Commissioning of the first group of seven beamlines will begin in the coming months, with first experiments beginning at the CSX beamline before the end of 2014.

At the NSLS-II beamlines, scientists will be able to generate images of the structure of materials such as lithium-ion batteries or biological proteins at the nanoscale level—research expected to advance many fields of science and impact people's quality of life in the years to come.

NSLS-II will support the Department of Energy's scientific mission by providing the most advanced tools for discovery-class science in condensed matter and materials science, physics, chemistry, and biology—science that ultimately will enhance national and energy security and help drive abundant, safe, and clean energy technologies.