Pianist Tomer Gewirtzman to Give a Recital at Brookhaven Lab, December 10 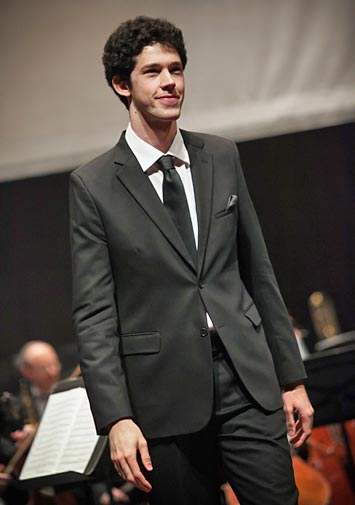 UPTON, NY — Pianist Tomer Gewirtzman will give a recital at the U.S. Department of Energy's Brookhaven National Laboratory on Wednesday, December 10, 2014, at noon in Berkner Hall. Sponsored by Brookhaven Science Associates, the event is free and open to the public. All visitors to the Laboratory 16 and older must bring a photo I.D.

Gewirtzman has participated and performed in prestigious international festivals and played on live radio shows in Israel and the United States. He has played in master classes with Emanuel Ax, Yefim Bronfman, Menahem Pressler, Dmitri Bashkirov, Nikolai Petrov and Paul Badura Skoda, among other fine pianists of our time. In addition to his recitals throughout Israel, including the Israel Philharmonic Orchestra, Jerusalem Symphony Orchestra and the Haifa Symphony Orchestra, he has debuted at London's Steinway Hall and in Paris in the Salle Cortot of the Ecole Normale. He was also invited to play recitals in the United States and in Russia in Nikolai Petrov's Kremlin festival.

Gewirtzman is currently working toward the Master of Music degree at the Juilliard School in New York.

For his recital at Brookhaven, Gewirtzman will perform works by Chopin and Rachmaninoff.