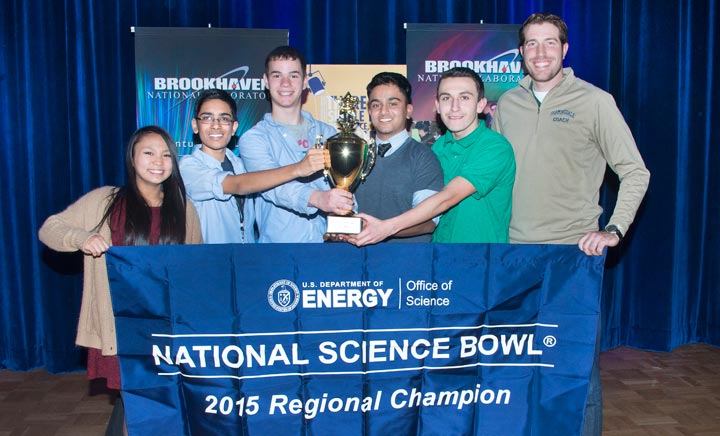 Pictured with their coach, Peter Macchia, are the students from Farmingdale High School who took top honors at the Regional High School Science Bowl held at Brookhaven Lab January 31. From left to right are Clarisse Baes, Ramin Chowdhury, Daniel Laine, Suraj Muralidharan, and Jake Chammas. The team will be awarded an all-expenses-paid trip to the National Finals in Washington, D.C., scheduled for April 30-May 4.

UPTON, NY — Farmingdale High School won the Brookhaven National Laboratory/Long Island Regional High School Science Bowl held at the Lab on Saturday, January 31. Farmingdale competed against 15 other teams from across the region in one of the nation's regional competitions of the 25th Annual U.S. Department of Energy National Science Bowl® (NSB). The winning teams will be awarded an all-expenses-paid trip to the National Finals in Washington, D.C., scheduled for April 30-May 4.

"The National Science Bowl® has grown into one of the most prestigious science academic competitions in the country and challenges students to excel in fields vital to America's future," U.S. Energy Secretary Ernest Moniz said. "I congratulate these students for advancing to the National Finals, where they will be among some of the brightest science and math students from across the country."

Farmingdale coach Peter Macchia is proud of his students. "These students worked very hard and practiced nearly every school day," said Macchia. "Their hard work paid off, putting Farmingdale High School on the map with recognition as a strong academic school."

Farmingdale's team captain student Suraj Muralidharan agrees with the coach.  "We were a little disappointed when we took fourth place last year making this year's victory even sweeter," said Muralidharan. "We congratulate all of the teams here today and recognize how hard they had to work to participate in this contest." 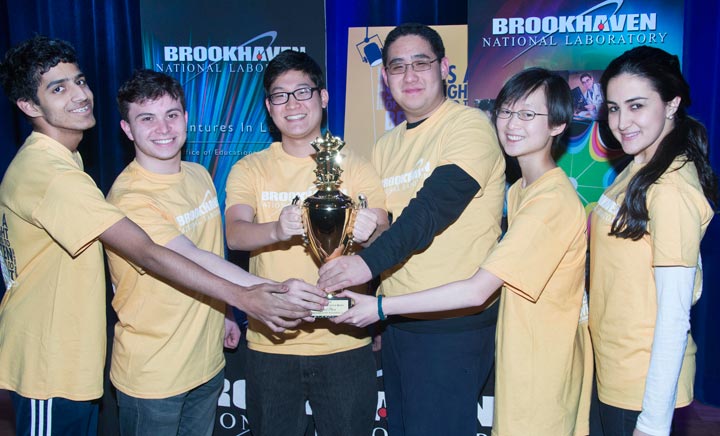 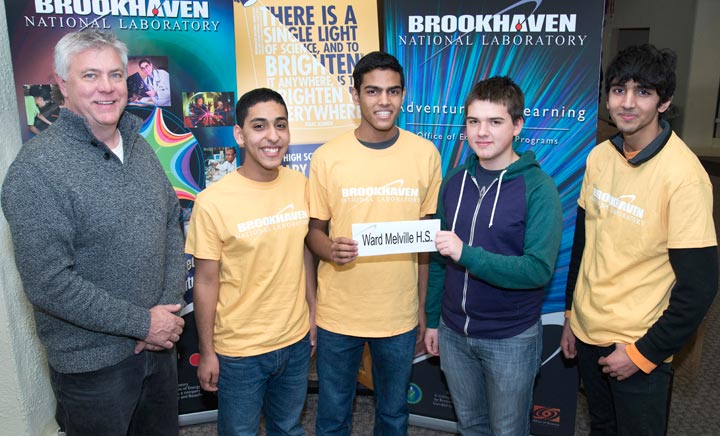 Pictured with their coach, Robert Spira, are students from Ward Melville High School who earned third place at the Regional High School Science Bowl held at the Lab on Saturday, January 31. From left to right are Roshan Patel, Nima Mohammadi, Andrew Mata, and Rajiv Moturu.

The high school team that won the 2014 NSB received a nine-day, all-expenses-paid science trip to Alaska, where they learned about glaciology, marine and avian biology, geology and plate tectonics. The second place high school team at the 2014 NSB won a five-day, fully guided adventure tour of several national parks, which included a whitewater rafting trip.

Approximately 240,000 students have participated in the National Science Bowl® since it was established in 1991, and it is one of the nation's largest science competitions. More than 14,000 students compete in the NSB each year. 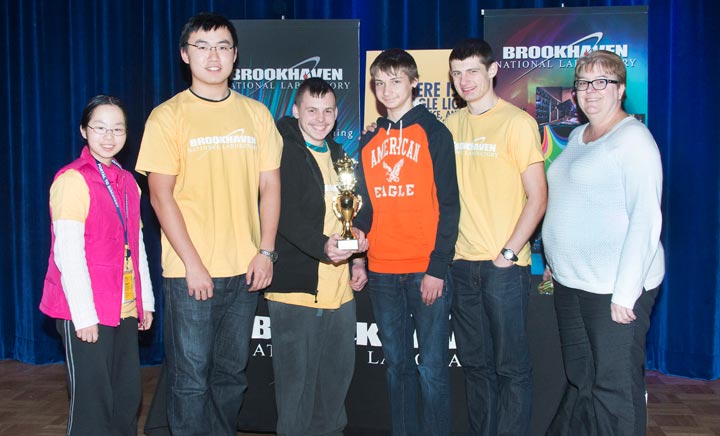 In the competition at Brookhaven, participating students received a Science Bowl t-shirt, and winning teams also received trophies, medals, and cash awards. Prizes are courtesy of Brookhaven Lab's event sponsor, Brookhaven Science Associates, the company that manages and operates the Lab for the U.S. Department of Energy.