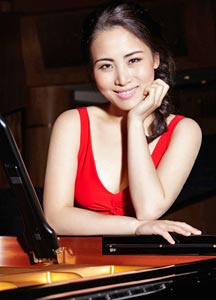 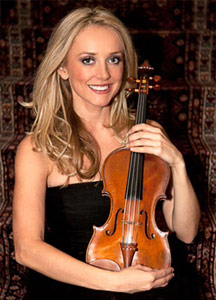 UPTON, NY —Pianist Di Wu and violinist Solomiya Ivakhiv will perform in concert at the U.S. Department of Energy's Brookhaven National Laboratory on Wednesday, March 11, at noon in Berkner Hall. Sponsored by Brookhaven Science Associates (BSA), the event is free and open to the public. All visitors to the Laboratory 16 and older must bring a photo I.D.

Wu and Ivakhiv are both graduates of the world-renowned Curtis Institute of Music in Philadelphia and repeat performers on Brookhaven Lab's Berkner Hall stage. Their joint appearance to perform both as a duo and as soloists is a noteworthy event.

In addition to orchestra engagements, Wu is sought after as a recitalist. In New York, she has debuted at Carnegie Hall and Alice Tully Hall at Lincoln Center. She has also appeared at music centers in Chicago, Houston, Los Angeles, and San Francisco, as well as at the Gilmore International Keyboard Festival, Ravinia Festival, and Portland Piano Festival. She is also a frequent performer in Europe and in major venues throughout Asia. Wu's most recent appearance in Tokyo took place before an audience of more than 11,000 people and was recorded and released by Sony-Epic Records in Japan.

Violinist Solomiya Ivakhiv enjoys an international career as a soloist and chamber musician throughout Europe, North America, and China. Since her orchestral debut with the Lviv Philharmonic Orchestra at the age of 12, Ivakhiv has appeared as a soloist with numerous orchestras in the United States and extensively in her native home of Ukraine with the Lviv Philharmonic and the Ukrainian National Symphony.  Many of her concerts have been broadcast on National Public Radio, Voice of America radio, Ukrainian National Radio and Television companies, and China's Hunan Television.  In the 2013-2014 concert seasons, Ivakhiv made three appearances at Weill Recital Hall at Carnegie Hall and participated in the world premiere performance of Angel's Touch by composer Yevhen Stankovych.  For the past three seasons, she has been artistic director of the Music at the Institute concert series in New York City. Highly sought as a chamber musician, Ivakhiv collaborates with renowned artists such as Joseph Silverstein, Gary Graffman, Roberto Diaz, Claude Frank, Steven Isserlis, Gil Kalish, Philip Setzer, Eugene Drucker, and Valentina Lisitsa. She holds a Doctor of Musical Arts from Stony Brook University, where her principal teachers were Philip Setzer and Pamela Frank.