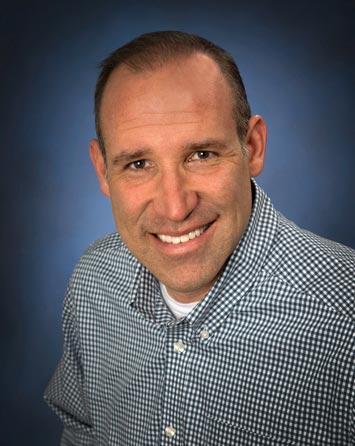 UPTON, NY — Jason Remien, an environmental management engineer with more than 20 years' experience at the U.S. Department of Energy's (DOE) Brookhaven National Laboratory, has been named manager of the Lab's Environmental Protection Division (EPD), effective Feb. 23. Remien has served as the division's interim manager since April 2013, taking on this role from the former manager, Bob Lee, who is now the environment, safety, and health manager for the National Synchrotron Light Source II facility at Brookhaven Lab.

"Brookhaven Lab has become a recognized leader for environmental management in the DOE complex—for protecting groundwater, managing waste disposal, and more—and Jason Remien and Bob Lee have been important contributors in that process," said Associate Laboratory Director for Environment, Safety & Health Gail Mattson. "They have the knowledge, experience, commitment, and drive to succeed in their new roles to help support the Laboratory's important research."

"Scientists at Brookhaven Lab are doing research that can change the world, and I'm proud to be part of the team that protects resources here on site for neighbors, staff, and wildlife."

With Remien as manager, EPD will continue ensuring that the Lab meets all applicable environmental regulatory and permit requirements, protecting and restoring the aquifer system beneath the Lab through the Groundwater Protection Program, and managing hazardous and radioactive waste for safe, proper disposal. Remien is also responsible for maintaining the Lab's environmental management system, which meets the rigorous requirements of the globally recognized International Organization for Standardization (ISO) 14001 Environmental Management Standard, with emphasis on compliance, pollution prevention, and community involvement.

In addition, EPD manages the Lab's cultural resources on site—including significant artifacts from the Lab's past scientific discoveries, as well as World War I trenches and World War II buildings remaining from the site's days as a military camp between 1917 and 1947. It also manages the Upton Ecological and Research Reserve in collaboration with the Foundation for Ecological Research in the Northeast. This reserve covers 10 percent of the Lab site, providing opportunities for environmental research and habitat for more than 300 species of plants and 162 species of mammals, birds, reptiles, and amphibians, including approximately 27 species that are endangered, threatened, or of special concern.

"Scientists at Brookhaven Lab are doing research that can change the world, and I'm proud to be part of the team that protects resources here on site for neighbors, staff, and wildlife," Remien said.

Remien joined Brookhaven Lab as a field engineer in 1994, shortly after earning a bachelor's degree in civil engineering at Northeastern University. He managed environmental restoration projects from 1997 until 2001, including cleanup of the Peconic River and the sewage treatment plant on site. He became a regulatory compliance specialist and staff engineer in 2001 and was named supervisor of the Lab's environmental compliance group in 2010. Remien earned a master's degree in technological systems management from Stony Brook University in 2007.