The following press release was first issued by Stony Brook University. Two members of the interdisciplinary team are from Brookhaven Lab.

Stony Brook, NY – July 10, 2015 – A Stony Brook University research team has been awarded $2.5 million from the U.S. Department of Energy's (DOE) Advanced Research Projects Agency-Energy (ARPA-E) to develop a system that condenses water vapor from power plants in order to provide supplemental cooling for the plant and reduce water use. Led by Professor Jon Longtin, PhD, from the Department of Mechanical Engineering at Stony Brook University, the goal of the research is to condense water out of flue gas to provide additional cooling that may enable power plants to be built in dry and land-locked areas, not located near a large body of water, at a time when using open bodies of water for cooling has become a national and global concern. 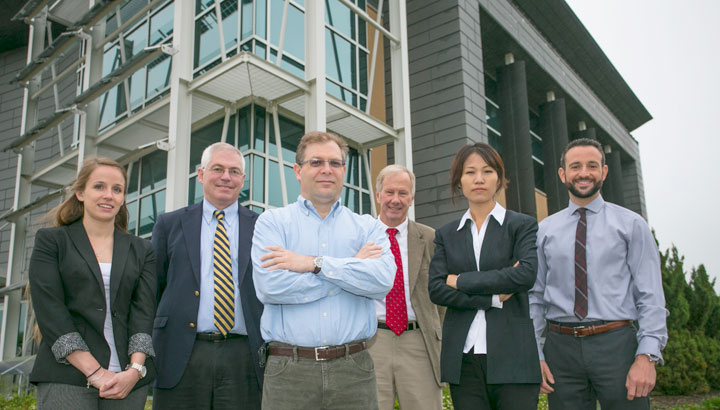 "This national award to Professor Longtin and his colleagues is a tremendous example of the cutting-edge energy research taking place at Stony Brook and in collaboration with Brookhaven National Laboratory," said Samuel L. Stanley Jr., MD, President of Stony Brook University. "An educator at Stony Brook for the past 20 years, Professor Longtin's leadership as an innovative researcher in the area of thermal science will lead the way to a successful project to help transform energy practices for the future."

"This additional ARPA-E grant to the Department of Mechanical Engineering is a testament to the caliber of its faculty and expertise in areas such as energy research and technology transfer," said Dennis N. Assanis, Provost and Senior Vice President for Academic Affairs at Stony Brook University. "Professor Longtin's research, and his collaboration with colleagues at Stony Brook and Brookhaven National Laboratory, will have a significant and national impact in that it will help power plants to generate electricity more efficiently in the United States."

The technology in development by Prof. Longtin and colleagues will be housed at the NY State Center of Excellence in Advanced Energy Research and Technology at Stony Brook and Brookhaven National Laboratory (BNL).  Additional team partners include United Technology Research Corporation and the Gas Technology Institute.

The research team will use a high-performance thermosyphon to move heat from the flue gas to the ambient with no additional refrigeration required. The thermosyphon uses the latent heat of vaporization – rather than a temperature gradient – for heat transfer. As such, the thermal resistance for heat transfer can be substantially reduced. The condensate is then stored and used for subsequent evaporative cooling using commercially available technologies.

"This technology has substantial promise for next-generation electric power plants in dry regions all around the country, particularly as water use continues to become a national concern," said Prof. Longtin. "The technology is suited for coal, natural gas, or combined-cycle power plants. We are extremely grateful for the opportunity that ARPA-E has provided to further the development of this technology."

Research staff at BNL will play an integral role in the project, which will include hosting the planned prototype demonstration.

"We are thrilled to have the chance to be part of the Stony Brook team on this high-impact project," said BNL project leader Dr. Tom Butcher. "This work gives us the opportunity to advance several important thermal-fluid problems including loop-heat pipes and composite material heat transfer."

About Stony Brook University's 2015 ARPA-E Awards Innovation in energy research has taken a leap at Stony Brook University. In just the past six months, Stony Brook has received four prestigious awards from the U.S. Department of Energy's (DOE) Advanced Research Projects Agency (ARPA-E). The grants, totaling nearly $5.7 million in funding, enable faculty from the Department of Mechanical Engineering to conduct research on new and innovative ways to improve energy efficiency and create cleaner energy systems, with a path in place for collaborative research, industry partnerships, and commercialization.

Collectively, these awards – which the DOE issues only when the research has significant potential to lead to usable technologies that will help improve U.S. economic prosperity, national security and environmental well-being – will bring scientists at Stony Brook and Brookhaven National Laboratory together with industry partners to create prototype energy systems to be incorporated into 21st Century cleaner energy practices. The endeavors broaden Stony Brook's focus on research and discovery and are geared to impact the economy by creating jobs within the University and beyond by leading to new product development.

Part of the State University of New York system, Stony Brook University encompasses 200 buildings on 1,450 acres. Since welcoming its first incoming class in 1957, the University has grown tremendously, now with more than 24,600 students, 2,500 faculty and 20 NCAA Division I athletic programs. Its membership in the prestigious Association of American Universities (AAU) places Stony Brook among the top 62 research institutions in North America. U.S.News & World Report ranks Stony Brook among the top 40 public universities in the nation and Kiplinger named it the 33rd best value in public colleges for in-state students and 26th for out-of-state students. One of four University Center campuses in the SUNY system, Stony Brook University co-manages Brookhaven National Laboratory, putting it in an elite group of universities that run federal research and development laboratories. As the largest single-site employer on Long Island, Stony Brook is a driving force of the regional economy, with an annual economic impact of $4.65 billion, generating nearly 60,000 jobs and accounting for nearly 4 percent of all economic activity in Nassau and Suffolk counties and roughly 7.5 percent of total jobs in Suffolk County.