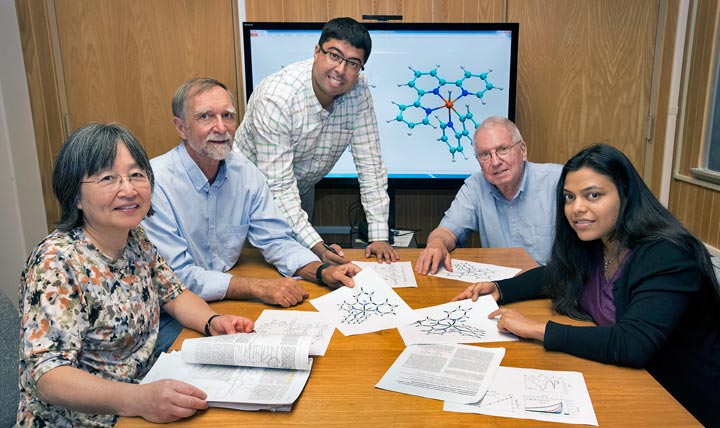 UPTON, NY—New research by chemists at the U.S. Department of Energy's Brookhaven National Laboratory and their collaborators offers clues that could help scientists design more effective catalysts for transforming carbon dioxide (CO2) to useful products. The study, published in Angewandte Chemie International Edition, reveals how a simple rearrangement of molecular attachments on an iridium hydride catalyst can greatly improve its ability to coax notoriously stable CO2 molecules to react.

"If you understand how a catalyst works, you can often devise ways to modify its function to make it work even better."

The research, which combined laboratory experiments with theoretical analysis, shows that, in the dark, only one of the two molecular arrangements can effectively transform CO2 to formate (HCOO–), a precursor of methanol. In the presence of light, however, both species form a common intermediate that can transform CO2 to carbon monoxide (CO), a useful raw material for making fuels and industrial chemicals.

"There is strong interest in finding ways to reuse CO2 to create a carbon-neutral society," said Brookhaven chemist Etsuko Fujita, who led the experimental portion of this work. "Reactions to produce products such as methanol or hydrocarbons from CO2 would be very useful. But if you think about the energy input and output of these reactions, it's really very difficult," she said.

Finding more efficient catalysts is the key to lowering the energy required to jump-start these reactions. Because various researchers had suggested that the iridium hydride catalyst might be an improvement over other well-known catalysts for producing CO from CO2, Fujita's group undertook this research to investigate its mechanism of action. 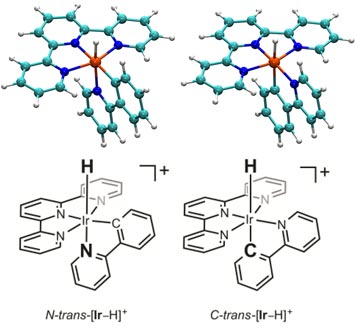 The Brookhaven research on an iridium hydride complex revealed two isomers—different molecular arrangements of the same atoms (represented here with stick figures and the corresponding images showing the positions of the atoms). A simple flip in positioning of the two connected rings of atoms at the bottom of these images relative to the rest of the molecule has a dramatic effect on the respective molecules' properties.

"If you understand how a catalyst works, you can often devise ways to modify its function to make it work even better," said Zahid Ertem, whose theoretical analyses provided the framework for understanding the experimental results.

Based on earlier research, the scientists had suspected there might be two varieties of this particular catalyst—different molecular arrangements of the same atoms, known as isomers. And indeed their experiments allowed them to isolate the two varieties.

The only structural difference between the two isomers is a simple flip in positioning of two connected rings of atoms relative to the rest of the molecule—one linked to the central iridium atom by a negatively charged carbon atom, and the other linked by a neutral nitrogen atom. But that simple flip in the positions of these two rings has a dramatic effect on the respective molecules' properties.

For example, the molecule was much more likely to give up what's called a hydride ion—a negatively charged ion consisting of a proton and two electrons—when the carbon-linked ring was in a position opposite the hydride compared with when the nitrogen-linked ring was in that position.

"That's important because the chemical conversion of CO2 to other products such as hydrocarbons can be facilitated when electrons are transferred to CO2 two at a time as they are in hydride ions," Ertem said. "So a catalyst with a higher tendency to release these hydride ions—a higher hydricity—is potentially a much better catalyst.

"While the generation of formate is the first step in a possible sequence of hydride transfer reactions, we envision going further than formate—for example, to methanol," he said.

Another aim of the study was to explore the role of iridium hydride as a proposed key intermediate in the conversion of CO2 to CO. But as it turns out, the intermediate is a form of the molecule that lacks the hydride but has the carbon-linked ring in the position opposite where the hydride would attach.

"In fact, no matter which isomer we started with, the theoretical calculations show that this species with the carbon positioned opposite the vacant hydride position forms as an intermediate, which then catalyzes the conversion of CO2 to CO," Ertem said.

The theoretical calculations also offered insight into why the positioning of the carbon atom is so essential to the reactivity of this species—and may suggest strategies for the rational design of more effective catalysts.

"In the ground state, the length of the metal-hydride bond is significantly longer in the isomer where the carbon is opposite the hydride than it is in the flipped isomer where the nitrogen atom is opposite the hydride," said Ertem. "Unlike the neutral nitrogen atom, the negatively charged carbon 'pushes' electrons through the metal atom toward the hydride ion, lengthening the metal-hydride bond and increasing the hydricity. That, in turn, makes it easier for the hydride to be given up during reactions when the carbon is in this position."

A next step might be trying to design an even more reactive catalyst by adding strong electron-donating groups.

This work was supported by the DOE Office of Science and by JST.