The Baffling Behavior of the Beauty Quark 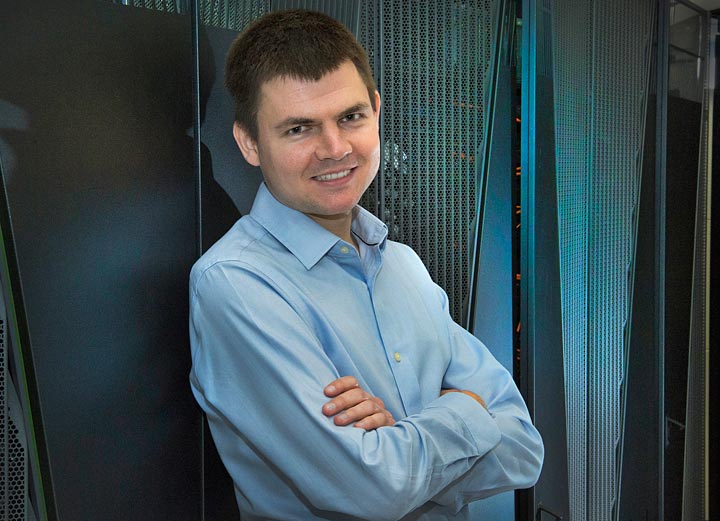 Stefan Meinel, a RHIC Physics Fellow at the RIKEN BNL Research Center (RBRC) and assistant professor at the University of Arizona, is the recipient of this year's Kenneth G. Wilson Award for Excellence in Lattice Field Theory. He is pictured with Brookhaven and RBRC's Blue Gene/Q supercomputer, on which he completed some of his award-winning calculations.

Stefan Meinel, a research fellow at the RIKEN BNL Research Center (RBRC) at the U.S. Department of Energy's Brookhaven National Laboratory and an assistant professor of physics at the University of Arizona, has been awarded the 2015 Kenneth G. Wilson Award for Excellence in Lattice Field Theory. The award is granted annually to young researchers for significant contributions to lattice field theory, a method that maps particle interactions onto a four-dimensional lattice or grid. With this approach, otherwise intractable problems involving strongly interacting quantum systems can be solved.

Meinel uses supercomputers to investigate the behavior of the beauty quark, the second heaviest in a family of six known quarks. Unexplained experimental results for how these quarks decay may point to fundamental physics beyond the Standard Model, scientists' current understanding of fundamental particles and their interactions.

Lattice field theory was first formulated by Nobel Prize-winning physicist Kenneth G. Wilson in the 1970s, and its application to numerical lattice QCD calculations was pioneered a decade later by Brookhaven physicist Michael Creutz. In 2012, an international team of physicists from Brookhaven, Columbia University, University of Connecticut, University of Edinburgh, and University of Southampton won the 2nd annual Kenneth G. Wilson award for their calculation of a kaon decay—a result that is relevant for understanding matter-antimatter asymmetry in the universe. "Brookhaven is an ideal and historical place for the lattice QCD community," said Samuel Aronson, the director of RBRC and a RHIC physicist. "Its continuing leadership in the field has been made possible in part by its focus on fostering the future generation of particle and nuclear physicists," a key part of the RBRC mission.

Meinel accepted the award at the 33rd International Symposium on Lattice Field Theory, where he gave a plenary talk. The selection committee cited Meinel's "substantial and timely contributions in new research directions in physics of the beauty quark using lattice quantum chromodynamics." Quantum chromodynamics, or QCD, is the theory that describes the strong force interactions among subatomic particles known as quarks and gluons.

"In the last ten years or so we have seen a number of exciting results with unprecedented precision come out of lattice QCD. Meinel's work is one of the most prominent among them," said Taku Izubuchi, leader of the RBRC Computing Group. RBRC is a collaborative research center established by the Japanese RIKEN laboratory and Brookhaven Lab to advance nuclear and particle physics through integrative experimental, theoretical, and computational science.

"This award gave me the opportunity to share the research that I have been doing. It is recognition that this kind of research is important and helps to make it more visible," said Meinel.

Meinel and his colleagues use some of the most powerful supercomputers in the world – including Brookhaven and RBRC's Blue Gene/Q – to calculate how the strong force affects the rate at which the beauty quark transforms, or "decays," into lighter quarks. The calculations are used to interpret experimental data on quark decay rates from particle colliders such as the Large Hadron Collider (LHC).

He focuses on puzzling deviations in beauty quark decay rates between Standard Model predictions and experimental observations, in hopes that these deviations will reveal new fundamental physics.

In August, Meinel and his co-authors, William Detmold (MIT) and Christoph Lehner (Brookhaven Lab), published calculations that helped untangle one of these particle physics mysteries. Previously, experimentalists had measured two different rates for the transformation of the beauty quark into the up quark. These two rates were inconsistent under the Standard Model, but could be explained by a new theory.

Meinel's calculations, paired with new experimental measurements from the LHCb collaboration, showed that this decay does not, in fact, deviate from the Standard Model prediction.

"This finding was accepted by the larger community—not only theoretical physicists, but experimental physicists as well—as a sensational result," said Izubuchi.

"There are other decay processes that still exhibit such tensions or anomalies or puzzles," Meinel said. "Even though this particular story did not turn out to be a likely candidate of new physics, there are other decays that are."

As an RBRC fellow, Meinel will continue to explore some of these puzzling beauty quark decays, such as so-called "penguin processes"—rare particle decays that were revealed to have unexpected properties during the first run of the LHC, such as a lower than predicted decay rate. The physical diagram of this decay—a beauty quark transforming into a strange quark, a muon, and an anti-muon—vaguely resembles the shape of a penguin, earning the process its unique nickname.

"There is growing excitement in the field," Meinel said.

Meinel's work is supported by RIKEN, the DOE Office of Science (HEP), the National Science Foundation (NSF), and the University of Arizona.